How Successful People Work Less and Get More Done. Follow Entrepreneur on Facebook to join the discussion on hot topics. 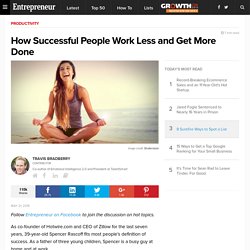 As co-founder of Hotwire.com and CEO of Zillow for the last seven years, 39-year-old Spencer Rascoff fits most people’s definition of success. As a father of three young children, Spencer is a busy guy at home and at work. What’s the one thing that Spencer refuses to do on the weekend? Work—at least, in the traditional sense. Rascoff says: “I never go into the office on weekends, but I do check e-mail at night. A new study from Stanford shows that Rascoff is on to something. The study found that productivity per hour declines sharply when the workweek exceeds 50 hours, and productivity drops off so much after 55 hours that there’s no point in working any more.

Successful people know the importance of shifting gears on the weekend to relaxing and rejuvenating activities. Related: 10 Truths We Forget Too Easily This is easier said than done, so here’s some help. 1. 2. 3. 4. No time to exercise during the week? What Happened When I Gave Up Email. Luxury for less: How to stay in a five-star hotel for less than €100pp. Open Gallery 6 We all love a little bit of luxury. 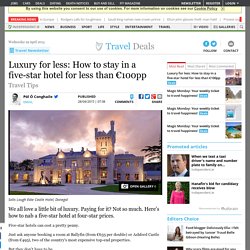 Paying for it? Not so much. Here's how to nab a five-star hotel at four-star prices. Five-star hotels can cost a pretty penny. Just ask anyone booking a room at Ballyfin (from €635 per double) or Ashford Castle (from €495), two of the country's most expensive top-end properties. But they don’t have to be. A little sleuthing goes a long way when it comes to booking hotels, and anyone prepared to put in time online, travel midweek (Sunday through Thursday) and share a room should be able to make significant savings... even on a single night. Here are five deals to get you started - just bear in mind that prices are based on two people sharing, rather than the total price per room. €89.50pp: Glenlo Abbey Hotel, Galway Galway's Glenlo Abbey Hotel Glenlo Abbey has B&B in its classic king rooms from €179 midweek in May. Details: 091 519600; glenloabbeyhotel.ie €89.50: Dylan Hotel, Dublin Dublin's Dylan Hotel. 10 Books that Stimulate the Best Conversations - Science of People. 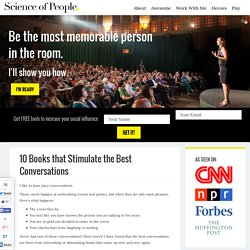 These rarely happen at networking events and parties, but when they do–ahh–such pleasure. Here’s what happens: The event flies byYou feel like you have known the person you are talking to for yearsYou are so glad you decided to come to the eventYour cheeks hurt from laughing or smiling Never had one of these conversations? Don’t worry! I sat down and reviewed all of the books I have ever read (thank you Goodreads!)

Top 10 Conversation-Worthy Books: 1. A Rogue Economist Explores the Hidden Side of Everything By Steven D. Freakonomics is filled with amazing stories and facts. Follow Up Question: Killer Conversation Starters - Science of People. We have talked a lot about the importance of having open and approachable body language at networking events or parties. 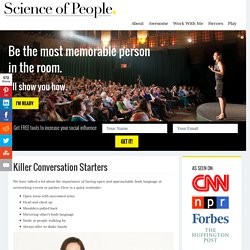 Here is a quick reminder: Open torso with uncrossed armsHead and chest upShoulders pulled backMirroring other’s body languageSmile at people walking byAlways offer to shake hands But what else can you do to encourage good conversation? I have asked friends from around the web to help with some conversation tricks in addition to some of the ones I use. Here are our favorites: Killer Openers: These openers work great for beginning a conversation. 1. Continue the Conversation: If you feel a little awkward asking personal questions right out of the gate, use your environment and surroundings to create conversation. 11.

If you’re loving this article, share it on Twitter! Recommended Article By patrick: What's on Your Bucket List? 101 Things To Do Before You Die - pmckenna.fpmca - Gmail. Theo Dorgan: Yours is the right and the power to imagine a new Republic.