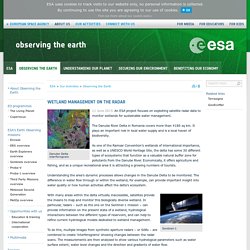 The Danube River Delta in Romania covers more than 4180 sq km. It plays an important role in local water supply and is a local haven of biodiversity. As one of the Ramsar Convention’s wetlands of international importance, as well as a UNESCO World Heritage Site, the delta has some 30 different types of ecosystems that function as a valuable natural buffer zone for pollutants from the Danube River. Understanding the area’s dynamic processes allows changes in the Danube Delta to be monitored. Sentinel-1 With many areas within the delta virtually inaccessible, satellites provide the means to map and monitor this biologically diverse wetland. To do this, multiple images from synthetic aperture radars – or SARs – are combined to create ‘interferograms’ showing changes between the radar scans.

A closer look. Step by Step: Flood Hazard Mapping. A. 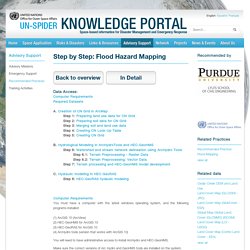 Workflow for the Creation of CN Grid in ArcMap 1. Preparing land use data for CN Grid Open ArcMap. Create a new empty map, and save it as cngrid.mxd (or any other name). 1.1. The grid is added with a unique symbology assigned to cells having identical numbers as you can see below: These numbers represent a land use class defined according to the USGS land cover institute (LCI). 1.2. Eventually, we are going to use these land use classes and soil group type, in conjunction with runoff curve numbers (CN), to create the curve number grid. To implement the above re-classification, use the Spatial Analyst Tools in Arc Toolbox. In the reclassification window, confirm the Input raster is cedar_lu, Reclass field is Value, and then manually assign the new numbers based on the above table as shown below (leave NoData unchanged).

Save the output raster as lu_reclass in your working folder, and click OK. 1.3. Step by Step: Recommended Practice drought monitoring (ENVI 4.8) Data Preparation/Pre-processing: A. 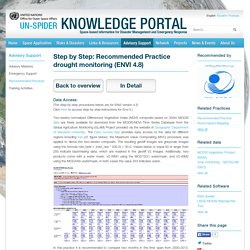 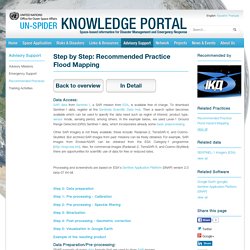 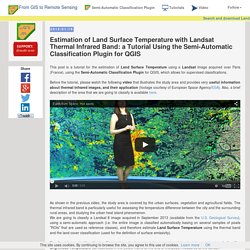 Before the tutorial, please watch the following video that illustrates the study area and provides very useful information about thermal infrared images, and their application (footage courtesy of European Space Agency/ESA). Also, a brief description of the area that we are going to classify is available here. Download and resampling of MODIS images - spatial-analyst.net. His article explains how to automate download, mosaicking, resampling and import of MODIS product to a GIS. 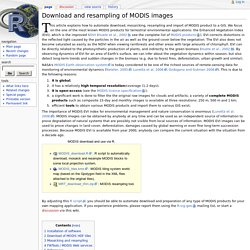 We focus on the one of the most known MODIS products for terrestrial environmental applications: the Enhanced Vegetation Index (EVI), which is the improved NDVI (Huete et al., 2002; see the complete list of MODIS products). EVI corrects distortions in the reflected light caused by the particles in the air as well as the ground cover below the vegetation. The EVI also does not become saturated as easily as the NDVI when viewing rainforests and other areas with large amounts of chlorophyll. EVI can be directly related to the photosynthetic production of plants, and indirectly to the green biomass (Huete et al., 2002). By observing dynamics of EVI for an area of Earth's surface, we can infer about the vegetation dynamics within season, but also detect long-term trends and sudden changes in the biomass (e.g. due to forest fires, deforestation, urban growth and similar). References. Efficiently download and process MODIS data with R. # The ProjectMODIS function is a wrapper for the LPDAAC-developed MODIS Rrojection Tool (MRT) which can resample, subset and reproject HDF data # and convert them to geoTIFFS. 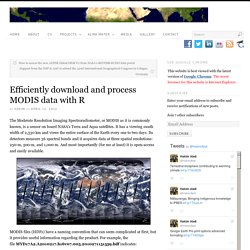