StopBullying.gov. Aggressive behavior may be bullying depending on what happened, how often it happens and who it happens to. 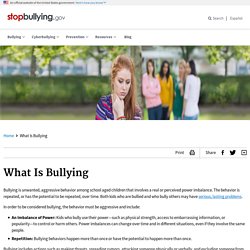 Find out what bullying is and what the different types are. You can also learn more about other topics related to bullying. Bullying Definition Bullying is unwanted, aggressive behavior among school aged children that involves a real or perceived power imbalance. Why does bullying happen? Effective solutions to bullying start with identifying why it is happening. 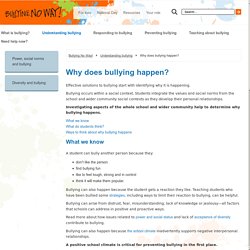 Bullying occurs within a social context. Students integrate the values and social norms from the school and wider community social contexts as they develop their personal relationships. Investigating aspects of the whole school and wider community help to determine why bullying happens. What we knowWhat do students think? Types of bullying. Tabify.io - New awsome tab. Emily-Anne Rigal: The 19-Year-Old Who's Banishing Bullying. Emily-Anne Rigal was recently ranked as one of Newsweek ’s 150 Most Fearless Women in the World. 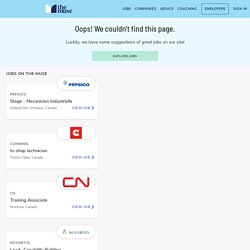 She’s received the Presidential Volunteer Service Award from President Obama. And Lady Gaga has called the 19-year old her hero. So, what is the college student doing that’s making such a splash? Rigal is the founder of We Stop Hate, nonprofit dedicated to ending bullying by raising teens' self-esteem. Through posts on YouTube and other social media channels, the site gives bullying victims from all corners of the world a chance to open up about their experiences in a judgment-free zone. Violence Prevention Works. OBPP Aligns with Common Core Standards! 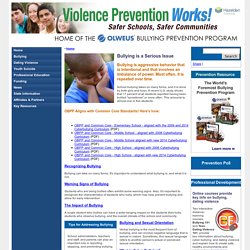 Here's how: Recognizing Bullying. The BULLY Project. StopBullying.gov. An Update on Alex Libby. A common theme in the numerous comments we’ve received to-date on the film Bully, centers on one of the film’s most moving characters, Alex Libby, a sweet-natured Iowa teen who had been bullied for years. 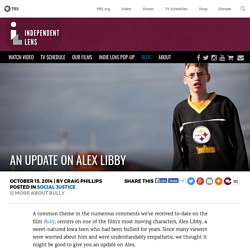 Since many viewers were worried about him and were understandably empathetic, we thought it might be good to give you an update on Alex. First of all, to cut to the chase in the happiest of ways: this year Alex worked as an intern for the Bully Project itself, in their offices in New York City! Last year, Alex was featured on CNN, and as you can see from this clip he’s evolving into a confident young man passionately hoping to help others who are being bullied: Alex was also featured, along with Kelby Johnson, in a piece Anderson Cooper did on the film and bullying, called “The Bully Effect.” How Using Social Media Affects Teenagers. Many parents worry about how exposure to technology might affect toddlers developmentally. 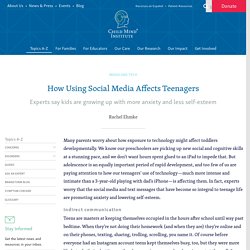 We know our preschoolers are picking up new social and cognitive skills at a stunning pace, and we don’t want hours spent glued to an iPad to impede that. But adolescence is an equally important period of rapid development, and too few of us are paying attention to how our teenagers’ use of technology—much more intense and intimate than a 3-year-old playing with dad’s iPhone—is affecting them. In fact, experts worry that the social media and text messages that have become so integral to teenage life are promoting anxiety and lowering self-esteem.

Indirect communication. Why does bullying happen?