Sochi 2014: New Russia revels in the success of the perfect made-for-TV Winter Olympics. There were insane contrasts and we are not just talking Vanessa-Mae, international violin superstar-turned-Eddie Edwards in lipgloss, versus the world’s best skiers. 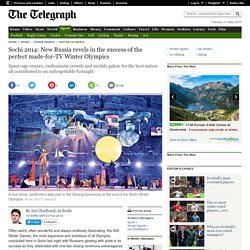 Stadia and venues of fabulous, pristine excellence shone beside vast areas of depressing, unfinished infrastructure, like the eerily sad and empty Disneyland-style funfair looming over the park. Will that ever open, you could not help but wonder. It was, asserted Russia’s deputy prime minister Dmitry Kozak, the Games where “smiley faces, Sochi’s warm sunshine and the glow of the Olympic gold have melted the ice of scepticism about the new Russia. After four months, Russia’s campaign in Syria is proving successful for Moscow. MOSCOW — Four months after launching airstrikes in Syria, the Kremlin is confident that Moscow’s largest overseas campaign since the end of the Soviet Union is paying off. 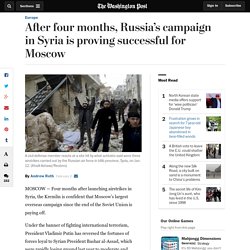 Under the banner of fighting international terrorism, President Vladimir Putin has reversed the fortunes of forces loyal to Syrian President Bashar al-Assad, which were rapidly losing ground last year to moderate and Islamist rebel forces in the country’s five-year-old crisis. Government forces are now on the offensive, and last week they scored their most significant victory yet, seizing the strategic town of Sheikh Miskeen from rebels who are backed by a U.S. -led coalition. According to analysts and officials here, the Russian government believes it has won those dividends at a relatively low cost to the country’s budget, with minimal loss of soldiers’ lives and with largely supportive public opinion.

Sochi 2014: New Russia revels in the success of the perfect made-for-TV Winter Olympics. Biography of Peter the Great of Russia. Born: Moscow - 30 May (9 June) 1672Died: St. 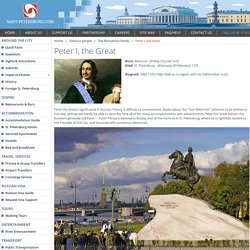 Petersburg - 28 January (8 February) 1725 Reigned: 1682-1725 (1682-1696 as co-regent with his half-brother Ivan) Peter the Great's significance in Russian history is difficult to overestimate. Peter the Great - Tsar/Tsarina. Peter the Great was a Russian czar in the late 17th century, who is best known for his extensive reforms in an attempt to establish Russia as a great nation. 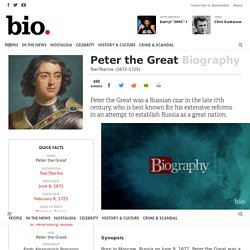 Synopsis Born in Moscow, Russia on June 9, 1672, Peter the Great was a Russian czar in the late 17th century who is best known for his extensive reforms in an attempt to establish Russia as a great nation. He created a strong navy, reorganized his army according to Western standards, secularized schools, administered greater control over the reactionary Orthodox Church, and introduced new administrative and territorial divisions of the country. Early Rule Peter the Great was born Pyotr Alekseyevich on June 9, 1672 in Moscow, Russia. Soviet government policy. Perestroika and Glasnost - Cold War. The Gorbachev initiative that had the most far-reaching effects was his decision to abandon Soviet control of the Communist nations of Eastern Europe. 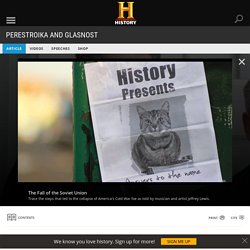 Since World War II, leaders of the USSR had viewed the maintenance of these states as essential to their nation’s security, and they had crushed anti-Soviet uprisings in Warsaw Pact countries (a group of eight Communist nations in Eastern Europe, including Poland and Hungary) that sought greater independence. However, just a year after taking power, Gorbachev oversaw reforms that loosened the Soviet grip on these states. Then, in a landmark December 1988 speech at the United Nations, he declared that all nations should be free to choose their own course without outside interference. To the amazement of millions, he capped this speech by announcing that the USSR would significantly reduce the number of troops and tanks that were based in the Eastern Bloc countries. Gorbachev’s move had unintended consequences. Perestroika – Russiapedia Of Russian origin.

The new cold war: are we going back to the bad old days? Tanks and troops invading a satellite state, tit-for-tat spy expulsions, high-risk military games of chicken involving nuclear bombers and interceptor jets, gas supply cut-offs, and angry diplomatic exchanges – if it sounds familiar, then it should. 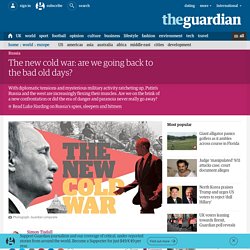 Newspaper headlines from Moscow to Washington and Sydney to Kiev all agree: the cold war is back. Well, maybe. Escalating tensions between President Vladimir Putin’s Russia and western countries led by the US are certainly reminiscent of the bad old days in some significant respects. The cold war, a truly global stand-off of immense ideological, military and political import, began, roughly, in the late 1940s and continued until the dissolution of the Soviet Union in 1991, an event later deplored by Putin as the biggest tragedy of the 20th century.

But this time around, the battleground is less extensive, the battle-lines less clear. Cold War History - Cold War. Space exploration served as another dramatic arena for Cold War competition. 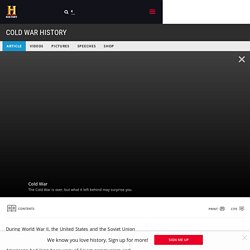 On October 4, 1957, a Soviet R-7 intercontinental ballistic missile launched Sputnik (Russian for “traveler”), the world’s first artificial satellite and the first man-made object to be placed into the Earth’s orbit. Sputnik’s launch came as a surprise, and not a pleasant one, to most Americans. In the United States, space was seen as the next frontier, a logical extension of the grand American tradition of exploration, and it was crucial not to lose too much ground to the Soviets. In addition, this demonstration of the overwhelming power of the R-7 missile–seemingly capable of delivering a nuclear warhead into U.S. air space–made gathering intelligence about Soviet military activities particularly urgent. So did the Red Army really singlehandedly defeat the Third Reich? This bugs me. 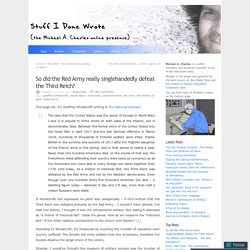 It’s Geoffrey Wheatcroft writing in The National Interest: The idea that the United States was the savior of Europe in World Wars I and II is popular in some circles on both sides of the Atlantic, but is demonstrably false. Moscow’s last stand: How Soviet troops defeated Nazis for first time in WW2. Having quickly conquered most of Europe, the Nazi German army that arrived on the outskirts of the USSR’s capital in autumn of 1941 appeared to be an unstoppable war machine. 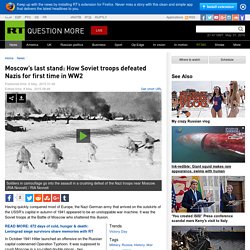 It was the Soviet troops at the Battle of Moscow who shattered this illusion. READ MORE: 872 days of cold, hunger & death: Leningrad siege survivors share memories with RT In October 1941 Hitler launched an offensive on the Russian capital codenamed Operation Typhoon. It was supposed to crush Moscow in a so-called double pincer - two simultaneous attacks from the north and south. Defeat of Hitler: Attack on Russia. In calling off Operation Sea Lion, Adolf Hitler, the Supreme Commander of the world's most powerful armed forces, had suffered his first major setback. 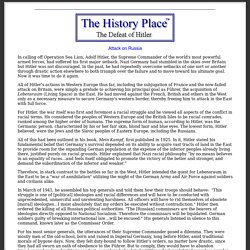 Nazi Germany had stumbled in the skies over Britain but Hitler was not discouraged. In the past, he had repeatedly overcome setbacks of one sort or another through drastic action elsewhere to both triumph over the failure and to move toward his ultimate goal. Now it was time to do it again.All of Hitler's actions in Western Europe thus far, including the subjugation of France and the now-failed attack on Britain, were simply a prelude to achieving his principal goal as Führer, the acquisition of Lebensraum (Living Space) in the East.

He had moved against the French, British and others in the West only as a necessary measure to secure Germany's western border, thereby freeing him to attack in the East with full force. Russian Revolution - Facts & Summary. The February Revolution (known as such because of Russia’s use of the Julian calendar until February 1918) began on March 8, 1917 (or February 23 on the Julian calendar), when demonstrators clamoring for bread took to the streets in the Russian capital of Petrograd (now called St. Petersburg). Supported by huge crowds of striking industrial workers, the protesters clashed with police but refused to leave the streets. On March 10, the strike spread among all of Petrograd’s workers, and irate mobs destroyed police stations.

Several factories elected deputies to the Petrograd Soviet, or council, of workers’ committees, following the model devised during the 1905 revolution. Russian Revolution of 1917. Russian Revolution of 1917, Lenin, Vladimir Ilich: during the Russian Revolution, 1917© Photos.com/Thinkstocktwo revolutions, the first of which, in February (March, New Style), overthrew the imperial government and the second of which, in October (November), placed the Bolsheviks in power. Winter Palace: demonstrators at the Winter Palace, 1917Hulton Archive/Getty ImagesBy 1917 the bond between the tsar and most of the Russian people had been broken. Governmental corruption and inefficiency were rampant.