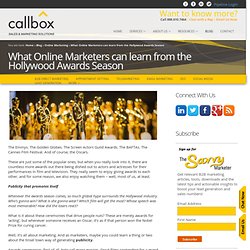 The Golden Globes. The Screen Actors Guild Awards. The BAFTAs. The Cannes Film Festival. Don’t believe these 6 Superstitions about B2B Lead Generation. What’s even worse is that despite of the challenge to utilize every strategy conceivable, marketers seem to be bound by certain beliefs that, although technically illogical, constrain them from using the full potential of their marketing campaigns. 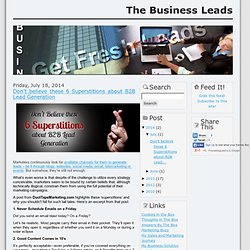 A post from DuctTapeMarketing.com highlights these ‘superstitions’ and why you shouldn't fall for such tall tales. Here’s an excerpt from that post: 1. Never Schedule Emails on a Friday Did you send an email blast today? Making the most out of Google + Circles - A Key... How Social Media Connects Us to the Things We L... What the Theory of “Disruptive Innovation... 30 Reasons Why You should Focus on Pinterest in 2014. After 5 Years, Email and Search still Beat Soci... Don't Let Perfect Cripple You. Get Stuff Done With These 3 Tips. In Case You Missed It: Google Chairman Says “Mobile Has Won” Google Executive Chairman Eric Schmidt was recently asked for his predictions for 2014 in an interview with Bloomberg. 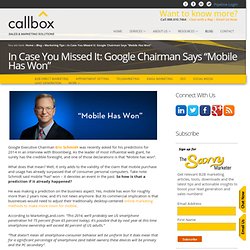 As the leader of most influential web giant, he surely has the credible foresight, and one of those declarations is that “Mobile has won”. What does that mean? Well, it only adds to the validity of the claim that mobile purchase and usage has already surpassed that of consumer personal computers. Take note: Schmidt said mobile “has” won – it denotes an event in the past. So how is that a prediction if it already happened? Why Social Media is no longer a Hype. The needs of the netizens have evolved through time. 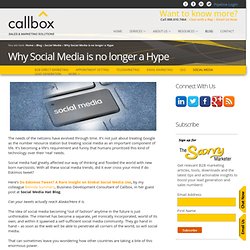 It’s not just about treating Google as the number resource station but treating social media as an important component of life. The Number One Mistake on @Twitter by Gary Vayn... 16 Traits Of The World's Most Successful People. When the young journalist Napoleon Hill interviewed the industrialist Andrew Carnegie in 1908, Carnegie liked Hill so much that he decided he would share all of the strategies that turned him from a penniless immigrant into the richest man in the world. 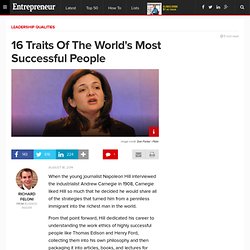 From that point forward, Hill dedicated his career to understanding the work ethics of highly successful people like Thomas Edison and Henry Ford, collecting them into his own philosophy and then packaging it into articles, books, and lectures for regular people wanting to achieve more in life. His 1937 book "Think and Grow Rich" is one of the bestselling books of all time. Before he began writing books, Hill ran two magazines with articles that provided the foundation for his most famous work.

In the inaugural April 1921 issue of Napoleon Hill's Magazine, Hill wrote about "The Magic Ladder to Success," an essay based on a speech he gave on a tour of the U.S. and would later adapt into a full-length book in 1930. How to Rule the World of Online Marketing – Beyoncé Style. When Beyoncé decided to surprise everyone by an abrupt album release on iTunes last December, she circumvented around standard methods for the music industry. 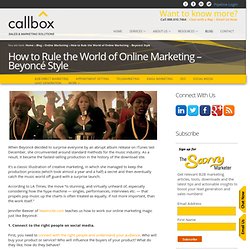 As a result, it became the fastest-selling production in the history of the download site. It’s a classic illustration of creative marketing, in which she managed to keep the production process (which took almost a year and a half) a secret and then eventually catch the music world off guard with a surprise launch. How to Stop a Conversation From Going in Circles.

Have you ever sat in a meeting and listened while the conversation went around and around in circles? 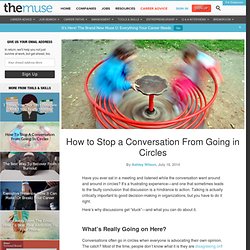 It’s a frustrating experience—and one that sometimes leads to the faulty conclusion that discussion is a hindrance to action. Talking is actually critically important to good decision-making in organizations, but you have to do it right. Here’s why discussions get “stuck”—and what you can do about it. Domaindotcom : Our mission is to power the ... Making the most out of Google + Circles - A Key... The Three Most Common Pitfalls Entrepreneurs Face. I'm happy to see you around. 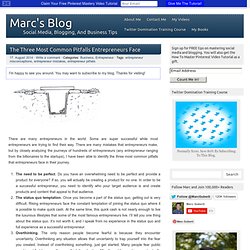 You may want to subscribe to my blog. Thanks for visiting! There are many entrepreneurs in the world. Some are super successful while most entrepreneurs are trying to find their way. 5 Reasons Why Forum Participation is Beneficial... How Business Review Sites Can Perk Up Your Brand Image. While it’s typically a gateway for consumers to express their like or dislike of a business, review sites also exist for business-to-business (B2B) industries, particularly IT products and services. 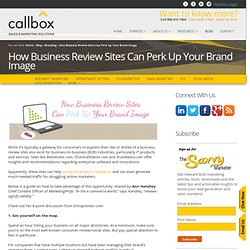 Sites like BestVendor.com, ITCentralStation.com and TrustRadius.com offer insights and recommendations regarding enterprise software and innovations. Apparently, these sites can help boost a business’s reputation and can even generate much-needed traffic for struggling online marketers. Below is a guide on how to take advantage of this opportunity, shared by Ann Handley, Chief Content Officer of MarketingProfs.

A Leader’s Responsibility. During workshops and talks I’m often asked about what to do when you’ve hired someone who just isn’t measuring up. 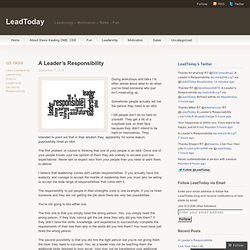 Sometimes people actually tell me the person they hired is an idiot. I tell people don’t be so hard on yourself. They get a bit of a surprised look on their face because they didn’t intend to be hard on themselves. Pufferfish, Pufferfish Pictures, Pufferfish Facts. Biologists think pufferfish, also known as blowfish, developed their famous “inflatability” because their slow, somewhat clumsy swimming style makes them vulnerable to predators. In lieu of escape, pufferfish use their highly elastic stomachs and the ability to quickly ingest huge amounts of water (and even air when necessary) to turn themselves into a virtually inedible ball several times their normal size. 8 Steps to Using LinkedIn for Lead Generation - Juntae DeLane. If you target business professionals, then LinkedIn is a great place to acquire leads. I have worked with several clients who want to generate business leads but have not fully implemented a LinkedIn strategy. Below you will find 8 steps to using LinkedIn for lead generation that I often tell my clients.

I hope this is helpful: Is your Slow Lead Generation Website Losing you Money? Follow these tips. A slow-poke website is obviously a liability, especially if intended for e-commerce or online marketing purposes. The last thing a site owner would want to do is to test the patience of its site visitors. But efficiency is not the only reason a site should be optimized for speed; you would also want to protect the reputation of your business by offering a good website. For example, if you’re a business that sells, say, IT products and services, having a slow website is not exactly the best way to get a good first impression. Luckily, there are ways to speed up your website and ensure the satisfaction of your potential prospects.

Consider these tips from CrazyEgg.com, the leading insight source on website optimization: Minimize HTTP Requests. In Case You Missed It: Google Chairman Says &ld... A few insights from the 2014 Social Media Marketing Industry Report. Among the available marketing channels today, social media is the most polarizing subject. 6 Powerful Ways to Target Your Customers with Facebook Ads. Advertising on Facebook is one of the biggest, if not the greatest, opportunities for businesses widely available today because of the ability to target very specific audiences using advanced tools not available through traditional mediums. The social networks $2.2 billion in advertising revenue in the first three months of 2014 prove that users are clicking on ads at an astonishing rate. Thanks to the targeting options available today, the click-through-rate (CTR) and return-on-investment (ROI) on the ads are being optimized to their highest potential. 6 Powerful Reasons Why you Should include Images in your Marketing - Infographic.

I have become a habitual Instagrammer. When I am out cycling, walking or just sitting admiring the view or the passing parade, I am looking for photo oportunities that I can snap and then share on my Instagram “app”. All I need to be carrying is my iPhone or iPad and with my Instagram app waiting patiently for me, I can capture that photo, apply a snazzy filter and click the Facebook and the Twitter share buttons and it flies around the world. 50 Ways to Promote and Market your Blog Posts. 6 Reasons Why Social Media is a Powerful Marketing Channel.

There are few good reasons why we should reconsider social media in our marketing campaign. Sales and Marketing - Community.

Related:  #Facebook   -  Instagram   -  Lead Generation   -  Don’t believe these 6 Superstitions about B2B Lead Generation   -  30 Reasons Why You should Focus on Pinterest in 2014   -  In Case You Missed It: Google Chairman Says “Mobile Has Won”   -  Why Social Media is no longer a Hype   -  How to Rule the World of Online Marketing – Beyoncé Style   -  6 Reasons Why Social Media is a Powerful Marketing Channel   -  Education   -  Enterprise