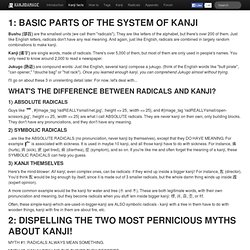 They are like letters of the alphabet, but there's over 200 of them. Just like English letters, radicals don't have any real meaning. And again, just like English, radicals are combined in largely random combinations to make kanji. Kanji (漢字) are single words, made of radicals. There's over 5,000 of them, but most of them are only used in people's names. Jukugo (熟語) are compound words: Just like English, several kanji compose a jukugo. I'll go on about these 3 in unrelenting detail later. Guys like ...are like the ABSOLUTE RADICALS (no pronunciation, never kanji by themselves), except that they DO HAVE MEANING. Is associated with sickness. Here's the mind-blower: All kanji, even complex ones, can be radicals- if they wind up inside a bigger kanji! A more common example would be the kanji for water and tree (水 and 木). Remember what I said earlier about "half the difficulty of Japanese is how it is taught? " Check it out: 丹 屯 斤 杉 后. 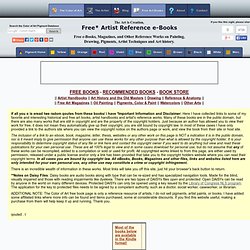 J. : Van Nostrand, ©1956 "IF you have not painted before, or not painted with oil paint before, you are naturally impatient to begin. HathiTrust Digital Library See site info on downloading Download PDF pages and book Read Online Oil Painting Methods and Demonstrations by HENRY GASSER, N. See site info on downloading PDF pages and book Read Online On the Theory and Practice of Painting in Oil and Watercolors,: for Landscape and Portraits; including the Preparation Of Colors, Vehicles, Varnishes, & Method Of Painting In Wax, or Encaustic; Also On The Chemical Properties And Permanency Of Colors, & a Manual of Lithography.

By Theodore Henry A. "Among the great number of artists that have lived since the revival of painting, how few stand in the first class of their profession. Read Online An Accidence, or Gamut, of Painting in Oil. Painting 1: Starting to Paint. Spectrum. George Pratt: Graphic Novel and Comic Shorts by theartdepartment on deviantART. 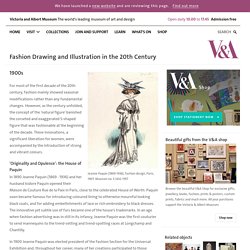 Museum no. E.1432-1957 1900s For most of the first decade of the 20th century, fashion mainly showed seasonal modifications rather than any fundamental changes. However, as the century unfolded, the concept of the 'natural figure' banished the corseted and exaggerated S-shaped figure that was fashionable at the beginning of the decade. 'Originality and Opulence': the House of Paquin In 1890 Jeanne Paquin (1869 - 1936) and her husband Isidore Paquin opened their Maison de Couture Rue de la Paix in Paris, close to the celebrated House of Worth. In 1900 Jeanne Paquin was elected president of the Fashion Section for the Universal Exhibition and, throughout her career, many of her creations participated to those international fairs. At Jeanne Paquin's death in 1936, the house passed into the hands of the Spanish couturier Antonio Canovas del Castillo. 1910s The 1910s were a period of dramatic change in fashion. Florrie Westwood 1920s 1930s.