Music Recognition Algorithm: How Shazam Works. You hear a familiar song in the club or the restaurant. 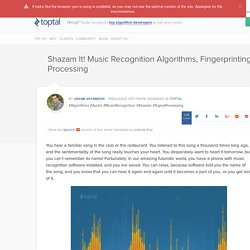 You listened to this song a thousand times long ago, and the sentimentality of the song really touches your heart. You desperately want to heart it tomorrow, but you can’t remember its name! Fortunately, in our amazing futuristic world, you have a phone with music recognition software installed, and you are saved. You can relax, because software told you the name of the song, and you know that you can hear it again and again until it becomes a part of you…or you get sick of it.

Mobile technologies, along with the huge progress in audio signal processing, have given us algorithm developers the ability to create music recognizers. But how does Shazam really work? Analog to Digital - Sampling a Signal What is sound really? Of course, this is not quite the case. Recording devices mimic this process fairly closely, using the pressure of the sound wave to convert it into an electrical signal. Tia's CS and Unix Links. AppKed - Download Apple Mac OS X Software & Games. About - Project Euler. Awesome Things You Can Do With Wolfram Alpha. 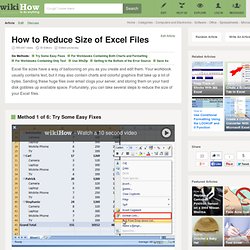 By deleting all unused rows to the bottom of the document on each worksheet, you can greatly reduce the file size. Ad Size of Excel Files Step 2 Version 3.360p.mp4- Watch a 10 second video2Save the file to Excel in binary (.xlsb). Doing this structures the workbook into a compressed folder that has many binary files. Deep Learning. 10 Programming Languages You Should Learn in 2014.

The tech sector is booming. 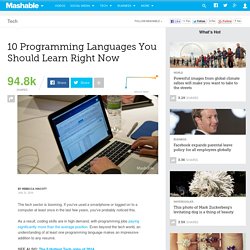 If you've used a smartphone or logged on to a computer at least once in the last few years, you've probably noticed this. As a result, coding skills are in high demand, with programming jobs paying significantly more than the average position. Even beyond the tech world, an understanding of at least one programming language makes an impressive addition to any resumé. The in-vogue languages vary by employment sector. Financial and enterprise systems need to perform complicated functions and remain highly organized, requiring languages like Java and C#. With some help from Lynda.com, we've compiled a list of 10 of the most sought-after programming languages to get you up to speed. 1. What it is: Java is a class-based, object-oriented programming language developed by Sun Microsystems in the 1990s. Where to learn it: Udemy, Lynda.com, Oracle.com, LearnJavaOnline.org. A first-person engine in 265 lines. TNS Digital Life. 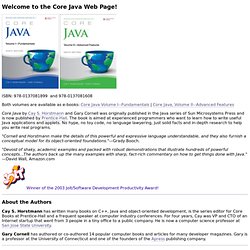 Horstmann and Gary Cornell was originally published in the Java series of Sun Microsystems Press and is now published by Prentice-Hall. The book is aimed at experienced programmers who want to learn how to write useful Java applications and applets. "Cornell and Horstmann make the details of this powerful and expressive language understandable, and they also furnish a conceptual model for its object-oriented foundations. " "Devoid of shaky, academic examples and packed with robust demonstrations that illustrate hundreds of powerful concepts...The authors back up the many examples with sharp, fact-rich commentary on how to get things done with Java. " Winner of the 2003 Jolt/Software Development Productivity Award! Java Programming - Joyce Farrell - Google Books. Engadget. Apps & Software News, Rumors & Product Reviews. Fresh links for developers.

Bruce Eckel's Free Electronic Books. These are electronic books in HTML on C++ and Java, along with the source code. 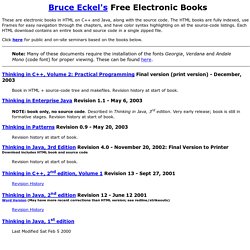 The HTML books are fully indexed, use Frames for easy navigation through the chapters, and have color syntax highlighting on all the source-code listings. Each HTML download contains an entire book and source code in a single zipped file. Click here for public and on-site seminars based on the books below. Note: Many of these documents require the installation of the fonts Georgia, Verdana and Andale Mono (code font) for proper viewing. These can be found here. Thinking in C++, Volume 2: Practical Programming Final version (print version) - December, 2003. The Java™ Tutorials. The Java Tutorials are practical guides for programmers who want to use the Java programming language to create applications. 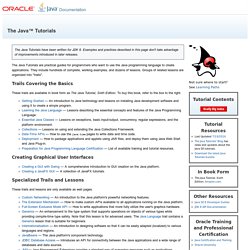 They include hundreds of complete, working examples, and dozens of lessons. Groups of related lessons are organized into "trails". The Java Tutorials primarily describe features in Java SE 8. For best results, download JDK 8. What's New The Java Tutorials are continuously updated to keep up with changes to the Java Platform and to incorporate feedback from our readers. This release of the tutorial corresponds to the JDK 8u40 release.

This release includes a new lesson in the Deployment trail that describes how to use the Java packaging tools to generate self-contained applications. Core Java Web Page.