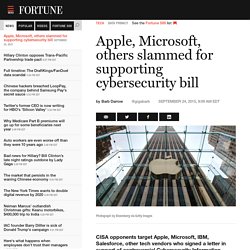 All rights reserved. Fortune.com is a part of the Time.com network of sites. Powered by WordPress.com VIP Email address or Password is incorrect Forgot Password? Want the Full Story? Privacy Policy Thank you for your interest in licensing Fortune content. 1. Julian Assange: Despite Congressional Standoff, NSA Has Secret Authority to Continue Spying Unabated. The Obama administration’s authority to collect Americans’ phone records in bulk will likely expire next week after senators from both parties rejected attempts to extend it. 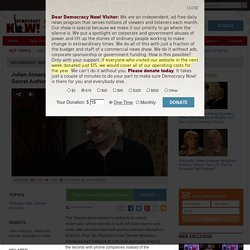 First, the Republican-led Senate rejected a House-passed measure to curb bulk spying by keeping the records with phone companies instead of the government. The Senate then rejected a bid by Senate Majority Leader Mitch McConnell to extend the current bulk spying program for two months. The Senate adjourned and will reconvene May 31, the day before the program expires. In an exclusive interview from his place of refuge inside the Ecuadorean Embassy in London, WikiLeaks founder Julian Assange weighs in on the NSA standoff.

Watch more from our Julian Assange interview: Part 2 || Part 3 || Part 4 || Part 5 This is a rush transcript. AMY GOODMAN: We turn now to a Democracy Now! AMY GOODMAN: This is Democracy Now! Welcome to Democracy Now! JULIAN ASSANGE: I’m not doing too badly, given the situation. Global threat interactive: What's the world scared of? Thousands of websites block Congress in Patriot Act protest. Thousands of websites are blocking Congress’s access to their sites in a show of force to protest the Patriot Act. 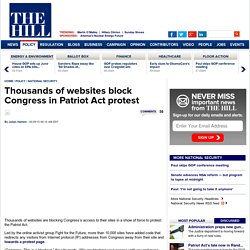 Led by the online activist group Fight for the Future, more than 10,000 sites have added code that redirects any visitors from Internet protocol (IP) addresses from Congress away from their site and towards a protest page. “Congress: This is a blackout,” the site reads. “We are blocking your access until you end mass surveillance laws.” Instead of renewing or reforming the three expiring provisions of the Patriot Act, the activist group wants Congress to let them expire. “The real answer is to end all authorities used to conduct mass surveillance,” Fight for the Future says on the protest page. Fight for the Future is known for such stunts as launching a blimp to oppose fast-track and the Internet meme Grumpy Cat behind a plane to celebrate federal regulators’ tough stance on net neutrality. Mexican vigilante gunmen disarm local POLICE so they can rid town of feared Knights Templar drug cartel.

Residents living in fear of violent criminal gangs in south-west Mexico are taking matters into their own handsYesterday 600 vigilantes seized control of town of Paracuaro in Michoacan state in bloody battle that left one deadConvoy of 'autodefensas', or self-defence groups, drove into the town controlled by drugs gang in blacked-out SUVsThey took back control from the Cabelleros Templarios (Knights Templar) gang which terrorised local residentsIn neighbouring Guerrero state, vigilante group the Public Safety System marched in honour of first anniversary By Harriet Arkell Published: 09:56 GMT, 6 January 2014 | Updated: 15:54 GMT, 6 January 2014 Hundreds of armed vigilantes stormed a Mexican town and arrested federal police in the latest bloody battle between residents, criminal gangs, and the police locals say are in league with the gang members. 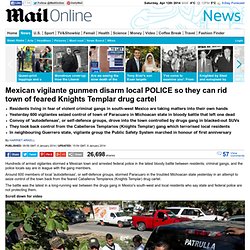 Scroll down for video Police officers are forced to surrender their weapons to armed vigilantes in Paracuaro after the group seized control. Hologram replaces Edward Snowden statue in Brooklyn park. NEW YORK — Hours after police removed an illicit bust of Edward Snowden from its perch in a Brooklyn park on Monday, artists replaced it with a hologram. 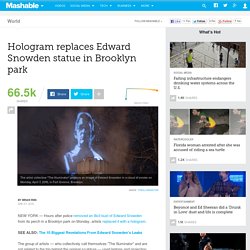 The group of artists — who collectively call themselves "The Illuminator" and are not related to the trio behind the original sculpture — used laptops and projection equipment to cast an image of Snowden in a haze of smoke at the spot where the sculpture once stood. They say the action was a message of defiance aimed at the authorities who "censored" the piece, according to a tumblr post. Image: theilluminator. Internet Trolls May be Trained Government Agents According to Leaked Document. Health Impact News Editor Glenn Greenwald, a journalist, constitutional lawyer, commentator, and author of three New York Times best-selling books on politics and law, has been working with NBC News the past few weeks publishing a series of articles on how covert government agents infiltrate the Internet to “manipulate, deceive, and destroy reputations.”

The information is based on documents leaked by National Security Agency (NSA) whistleblower Edward Snowden. Greenwald’s article, How Covert Agents Infiltrate the Internet to Manipulate, Deceive, and Destroy Reputations, is based on four classified documents produced by the British spy agency GCHQ, and presented to the NSA and three other English speaking agencies reportedly part of “The Five Eyes Alliance.” In this shocking piece, Greenwald publishes a copy of a spy training manual used entitled: “The Art of Deception: Training for Online Covert Operations.”