BitCoin. Penguins. Permaculture. Memory. Home. MODERNISM. Funny. Natural Phenomena. Did Edward Snowden Break His Oath? Should we just stop talking about any form of amnesty for Edward Snowden, because he swore an oath and broke it? 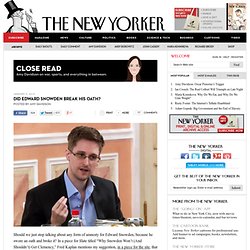 In a piece for Slate titled “Why Snowden Won’t (And Shouldn’t) Get Clemency,” Fred Kaplan mentions my suggestion, in a piece for the site, that Jimmy Carter’s pardoning of Vietnam draft dodgers offers “a useful parallel” when thinking of the legal situation of Edward Snowden. Kaplan writes: This is an odd and flawed argument—logically and legally, but also historically and factually.

The errors illustrate how we tend to misremember the past, and misjudge its passions when comparing them to our own. There is also the question of why an oath matters, in a different way than a serious federal law like the Selective Service Act—but first the facts. To begin with, did Snowden sign “an oath…not to disclose classified information”? What about the draft dodgers? Carter’s pardon was broad: you didn’t have to show that you’d opposed the war. Climate - Weather - Extreme. Atlantis. Google glasses. Genealogy. Personality types. Gift Ideas. Nikola Tesla. Art. Steve Jobs dies; Apple's co-founder transformed computers and culture. Steven P. 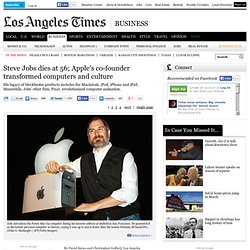 Jobs, the charismatic technology pioneer who co-founded and transformed one industry after another, from computers and smartphones to music and movies, has died. He was 56. Apple announced the death of Jobs — whose legacy included the Apple II, Macintosh, iMac, iPod, iPhone and iPad. "We are deeply saddened to announce that Steve Jobs passed away today," Apple said. "Steve's brilliance, passion and energy were the source of countless innovations that enrich and improve all of our lives. All Things D Is Haunted by the Man Who Isn't Here.

Steve Jobs in 2007//Photo Credit: Acaben/Flickr RANCHO PALOS VERDES, California — This year, as with the last 10, several hundred top digerati have flocked to Southern California for the All Things D tech conference. 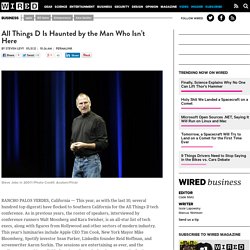 As in previous years, the roster of speakers, interviewed by conference runners Walt Mossberg and Kara Swisher, is an all-star list of tech execs, along with figures from Hollywood and other sectors of modern industry. This year’s luminaries include Apple CEO Tim Cook, New York Mayor Mike Bloomberg, Spotify investor Sean Parker, LinkedIn founder Reid Hoffman, and screenwriter Aaron Sorkin. The sessions are entertaining as ever, and the audience networking reliably ferocious. But a shadow hangs over the festive intentions of a well-deserved 10th anniversary celebration. It’s the first D Conference since Steve Jobs died last October. That’s huge. So it’s no wonder that his ghost haunts the proceedings. Tuesday afternoon’s last session is the one explicitly devoted to Jobs. Medicinal plants & herbs. Mind Sports Organisation. The Mind Sports Olympiad (MSO) is an annual international multi-disciplined competition and festival for games of mental skill and mind sports. 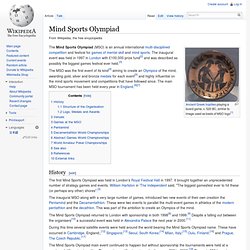 The inaugural event was held in 1997 in London with £100,000 prize fund[2] and was described as possibly the biggest games festival ever held.[3] The MSO was the first event of its kind[4] aiming to create an Olympics of the mind, awarding gold, silver and bronze medals for each event[5] and highly influential on the mind sports movement and competitions that have followed since. The main MSO tournament has been held every year in England.[6][7] History[edit] The first Mind Sports Olympiad was held in London's Royal Festival Hall in 1997. Curation - The Third Web Frontier. Posted by Guest Writer - January 8, 2011 Here is a guest article by Partice Lamothe - CEO of Pearltrees (Pearltrees is a consulting client of SVW.) 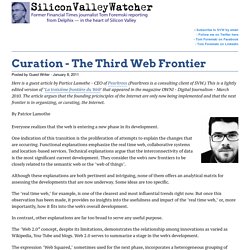 This is a lightly edited version of "La troisième frontière du Web" that appeared in the magazine OWNI - Digital Journalism - March 2010. The article argues that the founding pricinciples of the Internet are only now being implemented and that the next frontier is in organizing, or curating, the Internet. By Patrice Lamothe Everyone realizes that the web is entering a new phase in its development. The 5 Models Of Content Curation. Curation has always been an underrated form of creation. 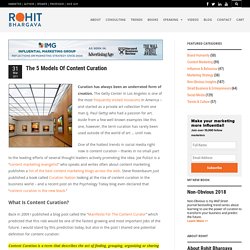 The Getty Center in Los Angeles is one of the most frequently visited museums in America – and started as a private art collection from one man (J. Paul Getty) who had a passion for art. Aside from a few well known examples like this one, however, the term curation has rarely been used outside of the world of art … until now. One of the hottest trends in social media right now is content curation – thanks in no small part to the leading efforts of several thought leaders actively promoting the idea. Joe Pulizzi is a “content marketing evangelist” who speaks and writes often about content marketing publishes a list of the best content marketing blogs across the web. PDF Converter - Discount.