Get the Ultimate 2018 Hacker Bundle – Pay What You Want. Politie arresteert 19-jarige Hagenaar wegens afpersing na DDoS-aanvallen. Pre-Installed Keylogger Found On Over 460 HP Laptop Models. HP has an awful history of 'accidentally' leaving keyloggers onto its customers' laptops. At least two times this year, HP laptops were caught with pre-installed keylogger or spyware applications. I was following a tweet made by a security researcher claiming to have found a built-in keylogger in several HP laptops, and now he went public with his findings. A security researcher who goes by the name of ZwClose discovered a keylogger in several Hewlett-Packard (HP) laptops that could allow hackers to record your every keystroke and steal sensitive data, including passwords, account information, and credit card details.

The Keylogger was found embedded in the SynTP.sys file, a part of Synaptics touchpad driver that ships with HP notebook computers, leaving more than 460 HP Notebook models vulnerable to hackers. Here’s the location of the registry key: "A party would need administrative privileges in order to take advantage of the vulnerability. Android Flaw Lets Hackers Inject Malware Into Apps Without Altering Signatures. Millions of Android devices are at serious risk of a newly disclosed critical vulnerability that allows attackers to secretly overwrite legitimate applications installed on your smartphone with their malicious versions. 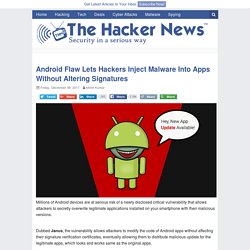 Dubbed Janus, the vulnerability allows attackers to modify the code of Android apps without affecting their signature verification certificates, eventually allowing them to distribute malicious update for the legitimate apps, which looks and works same as the original apps. The vulnerability (CVE-2017-13156) was discovered and reported to Google by security researchers from mobile security firm GuardSquare this summer and has been patched by Google, among four dozen vulnerabilities, as part of its December Android Security Bulletin. 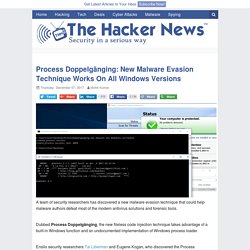 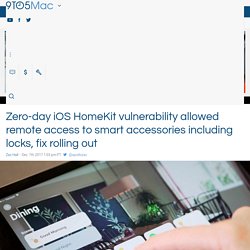 Our understanding is Apple has rolled out a server-side fix that now prevent unauthorized access from occurring while limiting some functionality, and an update to iOS 11.2 coming next week will restore that full functionality. 9to5Mac Happy Hour The vulnerability, which we won’t describe in detail and was difficult to reproduce, allowed unauthorized control of HomeKit-connected accessories including smart lights, thermostats, and plugs.

The most serious ramification of this vulnerability prior to the fix is unauthorized remote control of smart locks and connected garage door openers, the former of which was demonstrated to 9to5Mac. The issue was not with smart home products individually but instead with the HomeKit framework itself that connects products from various companies. Man Hacks Jail Computer Network to Get Friend Released Early. Ethiopian Espionage Shows Commercial Spyware Is Out of Control. Phishing Attacks on Bitcoin Wallets Intensify as Price Goes Higher and Higher. PayPal Subsidiary Data Breach Hits Up to 1.6 Million Customers. Global e-commerce business PayPal has disclosed a data breach that may have compromised personally identifiable information for roughly 1.6 million customers at a payment processing company PayPal acquired earlier this year. 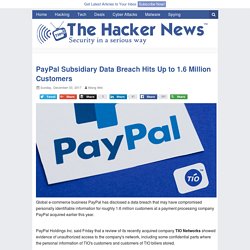 PayPal Holdings Inc. said Friday that a review of its recently acquired company TIO Networks showed evidence of unauthorized access to the company's network, including some confidential parts where the personal information of TIO's customers and customers of TIO billers stored. Acquired by PayPal for US$233 Million in July 2017, TIO Network is a cloud-based multi-channel bill payment processor and receivables management provider that serves the largest telecom, wireless, cable and utility bill issuers in North America. PayPal did not clear when or how the data breach incident took place, neither it revealed details about the types of information being stolen by the hackers, but the company did confirm that its platform and systems were not affected by the incident. World's Biggest Botnet Just Sent 12.5 Million Emails With Scarab Ransomware.

A massive malicious email campaign that stems from the world's largest spam botnet Necurs is spreading a new strain of ransomware at the rate of over 2 million emails per hour and hitting computers across the globe. 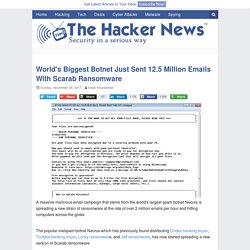 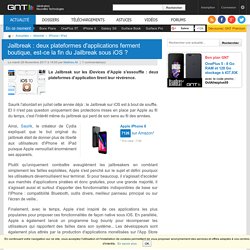 In March, the US Justice Department announced charges against two Russian intelligence officers (Dmitry Dokuchaev and Igor Sushchin) from Russia's Federal Security Service (FSB) and two hackers (Alexsey Belan and Karim Baratov) for breaking into yahoo servers in 2014. While Karim Baratov (Kay, a.k.a Karim Taloverov, a.k.a Karim Akehmet Tokbergenov) was arrested in Toronto at his Ancaster home by the Toronto Police Department in March this year, Alexsey Belan and both FSB officers currently reside in Russia, unlikely to be extradited.

In the federal district court in San Francisco on Tuesday, Baratov admitted to helping the Russian spies and pleaded guilty to a total of nine counts which includes: Les 5 pires cybermenaces attendues en 2018. MacOS High Sierra Bug Lets Anyone Gain Root Access Without a Password. If you own a Mac computer and run the latest version of Apple's operating system, macOS High Sierra, then you need to be extra careful with your computer. 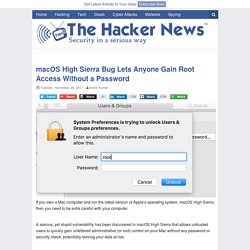 A serious, yet stupid vulnerability has been discovered in macOS High Sierra that allows untrusted users to quickly gain unfettered administrative (or root) control on your Mac without any password or security check, potentially leaving your data at risk. Discovered by developer Lemi Orhan Ergin on Tuesday, the vulnerability only requires anyone with physical access to the target macOS machine to enter "root" into the username field, leave the password blank, and hit the Enter a few times—and Voila! In simple words, the flaw allows an unauthorized user that gets physical access on a target computer to immediately gain the highest level of access to the computer, known as "root," without actually typing any password. Needless to say, this blindingly easy Mac exploit really scary stuff. Cryptocurrency Mining Scripts Now Run Even After You Close Your Browser.

Some websites have found using a simple yet effective technique to keep their cryptocurrency mining javascript secretly running in the background even when you close your web browser. Due to the recent surge in cryptocurrency prices, hackers and even legitimate website administrators are increasingly using JavaScript-based cryptocurrency miners to monetize by levying the CPU power of their visitor's PC to mine Bitcoin or other cryptocurrencies. After the world's most popular torrent download website, The Pirate Bay, caught secretly using Coinhive, a browser-based cryptocurrency miner service, on its site last month, thousands of other websites also started using the service as an alternative monetization model to banner ads. Tout comprendre à la faille de sécurité critique sur macOS High Sierra.

HP Silently Installs Telemetry Bloatware On Your PC—Here's How to Remove It. Do you own a Hewlett-Packard (HP) Windows PC or laptop? 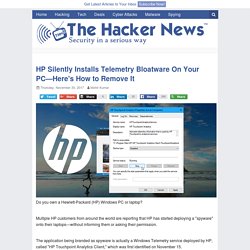 Multiple HP customers from around the world are reporting that HP has started deploying a "spyware" onto their laptops—without informing them or asking their permission. The application being branded as spyware is actually a Windows Telemetry service deployed by HP, called "HP Touchpoint Analytics Client," which was first identified on November 15. According to reports on several online forums, the telemetry software—which the HP customers said they never opted to have installed and had no idea was continually running in the background—was pushed out in a recent update. 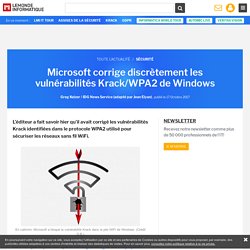 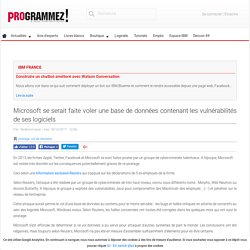 A l'époque, Microsoft est restée très discrète sur les conséquences potentiellement graves de ce piratage. SSD Drives Vulnerable to Attacks That Corrupt User Data. NAND flash memory chips, the building blocks of solid-state drives (SSDs), include what could be called "programming vulnerabilities" that can be exploited to alter stored data or shorten the SSD's lifespan. During the past few years, SSDs have slowly replaced classic disk-based HDDs as the prime storage medium for the world's data, taking over not only in data centers, but our phones, tablets, laptops, and desktop PCs. At their heart, SSDs are a collection of smaller components named NAND flash memory chips, all clustered together on rows, similar to classic RAM memory chips. Viacom Left Sensitive Data And Secret Access Key On Unsecured Amazon Server. Viacom—the popular entertainment and media company that owns Paramount Pictures, Comedy Central, MTV, and hundreds of other properties—has exposed the keys to its kingdom on an unsecured Amazon S3 server.

A security researcher working for California-based cyber resiliency firm UpGuard has recently discovered a wide-open, public-facing misconfigured Amazon Web Server S3 cloud storage bucket containing roughly a gigabyte's worth of credentials and configuration files for the backend of dozens of Viacom properties. These exposed credentials discovered by UpGuard researcher Chris Vickery would have been enough for hackers to take down Viacom's internal IT infrastructure and internet presence, allowing them to access cloud servers belonging to MTV, Paramount Pictures and Nickelodeon. Among the data exposed in the leak was Viacom's master key to its Amazon Web Services account, and the credentials required to build and maintain Viacom servers across its many subsidiaries and dozens of brands.

The vulnerability (CVE-2017-9805) is a programming blunder that resides in the way Struts processes data from an untrusted source. Specifically, Struts REST plugin fails to handle XML payloads while deserializing them properly. All versions of Apache Struts since 2008 (from Struts 2.5 to Struts 2.5.12) are affected, leaving all web applications using the framework’s REST plugin vulnerable to remote attackers. "On top of that, [the vulnerability] is incredibly easy for an attacker to exploit this weakness: all you need is a web browser," Man Yue Mo, an LGTM security researcher said.

CobianRAT, le logiciel qui permet aux pirates de pirater des pirates. Taringa: Over 28 Million Users' Data Exposed in Massive Data Breach. Exclusive — If you have an account on Taringa, also known as "The Latin American Reddit," your account details may have compromised in a massive data breach that leaked login details of almost all of its over 28 million users. Taringa is a popluar social network geared toward Latin American users, who create and share thousands of posts every day on general interest topics like life hacks, tutorials, recipes, reviews, and art.

The Hacker News has been informed by LeakBase, a breach notification service, who has obtained a copy of the hacked database containing details on 28,722,877 accounts, which includes usernames, email addresses and hashed passwords for Taringa users. The hashed passwords use an ageing algorithm called MD5 – which has been considered outdated even before 2012 – that can easily be cracked, making Taringa users open to hackers.