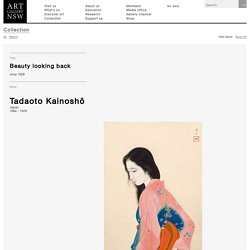 Artists and their Self Portraits. Van Gogh or Van Faux? The Art of the Selfie. Ewan McClure self-portrait time-lapse. ART-040113-Portraits in History. Better Know the Mona Lisa. History of Portraiture. 1000+ ideas about Joseph Assemblage on Pinterest. 1000+ images about L2 Painting (external) on Pinterest. Lesson: Bad Hair Day (Line and Shape) A change in curriculum structure: You may have read about the way we structured our Art Survey course last year in my post about the Identity Sketchbook Cover. 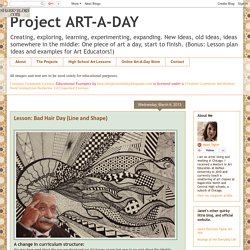 After looking at the pros and cons of this intense structure (1 Element of Art each week), I wanted to develop a less intense path. While I felt like my students really got to know the Elements really well last year, I just felt that it was a lot of work for both me and my students (which isn't a bad thing, necessarily). I also really wanted some more major pieces of art along the way (especially for the All-City Art Show, which we need to have artwork for by January). So, instead, we structured the curriculum to focus on a few Elements at a time, with the same idea of using the sketchbook for notes and exercises, and then applying those together into a piece of artwork. Look Within: Self-Portraiture. Archibald 2015: Nigel Milsom's portrait of barrister Charles Waterstreet favoured to win portrait prize. Could not load plugins: File not found The art of hanging the Archibald The 2015 Archibald Prize is meticulously curated by Anne Ryan who decides how and in which order the final portraits are hung in the gallery. 10, 2015 Nigel Milsom's arresting portrait of barrister Charles Waterstreet may be the favourite to win the Archibald Prize, but the artist is grateful to be a finalist. 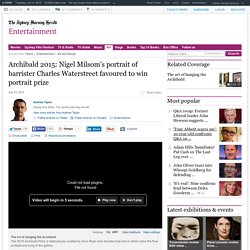 "I'm not that confident about winning it," he said. Nigel Milsom's portrait of barrister Charles Waterstreet is a strong contender for this year's Archibald Prize. Milsom won the Doug Moran National Portrait Prize in 2013 while he was in jail for armed robbery after he held up a convenience store in Glebe with his drug dealer James Simon. 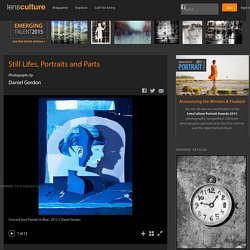 The resulting images are interesting examples of appropriation art in that the materials and images are culled from other sources and re-used, while the subjects and compositions reference Modernist masters like Picasso, Dalí, Matisse, and Cézanne. “I’m inspired by cooking and food, Matisse, and being in the ocean, among other things,” the artist Daniel Gordon says. “I begin with an idea of something I’d like to make, search for images online, print them, and then construct a three dimensional tableau that is then lit and photographed with a large format camera,” he explains. 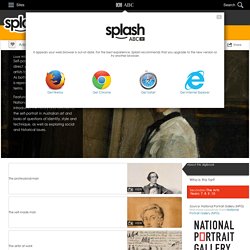 As both subject and creator, the artist is represented entirely in their own terms. Featuring 10 self-portraits from the National Portrait Gallery, this digibook introduces the history and function of the self-portrait in Australian art and looks at questions of identity, style and technique, as well as exploring social and historical issues. About this digibook. Mixed media portrait. Lenore lovely vintage portrait African American woman original mixed media painting. 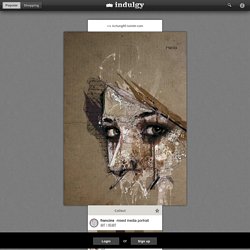 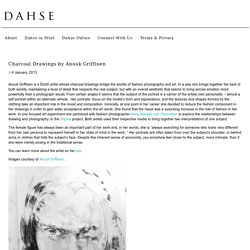 In a way she brings together the best of both worlds, maintaining a level of detail that respects the real subject, but with an overall aesthetic that seems to bring across emotion more powerfully than a photograph would. From certain angles it seems that the subject of the portrait is a carrier of the artists own personality – almost a self portrait within an alternate vehicle. Her portraits focus on the model’s form and expressions, and the textures and shapes formed by the clothing take an important role in the mood and composition. Ironically, at one point in her career she decided to reduce the fashion component in her drawings in order to gain wider acceptance within the art world. INSTALLATIONS.

Pre-Nostalgic is a 24 channel audio/visual installation of animated sound, sculpture ​ and drawing. 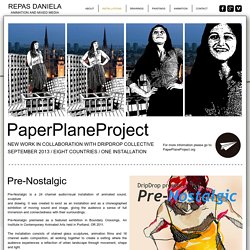 It was created to exist as an installation and as a choreographed exhibition of moving sound and image, giving the audience a sense of full immersion and connectedness with their surroundings. Artist Uses Dance Movements To Create Stunning Charcoal Drawings. EmailEmail New Orleans-based contemporary performance artist Heather Hansen’s work is the perfect union of dance and drawing. 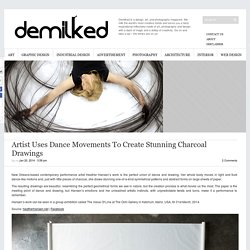 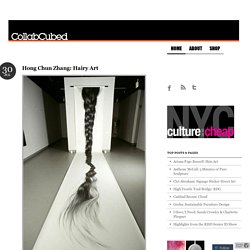 Her painting and drawing foundation from China was very rigorous, but her content choices are now less restricted due to her US exposure. Much of her work revolves around hair, something she identifies with, and characterizes her to some degree through her own long hair, in addition to being something Zhang finds both beautiful and at times repulsive. Cross-hatching. Modeling is a term that drawing borrows from sculpture to signify any graphic strategy that develops the appearance of the third dimension. Varying line width and weight, exploring tonal contrasts, cast shadows, linear cross-sections, and atmospheric perspective are some of the ways that the draughtsman responds to the visual phenomena of the three-dimensional world. Building on the investigations of line in the early weeks of the semester, we move on to a juncture where the boundary between this most abstract of elements begins to blur into another element – value, or tone – in all of its orchestral richness.

The drawings shown here all employ line in ways that express the third dimension through the development of tonality. Staunton, VA artist, Virginia Deane, employs the sharpened pencil in this drawing as if it were a pen & ink drawing, laying down distinct linear hatch marks to define tonal changes across the globular forms of the onions. M Vincent Van Gogh Aubrey Beardsley Guercino. How to Draw Realistic Eyes (Photorealistic) How to Paint a Realistic Eye [Coloring Tutorial] Chuck Close. Presenting Partner: Citi ‘Chuck Close is magician and mythbuster all in one’ –Washington Post Portraits from one of America’s best-loved visual artists are coming to Sydney this summer, as part of the Sydney International Art Series.

Chuck Close is an artist noted for his highly inventive techniques used to paint the human face, and is best known for his large-scale, photo-based portrait paintings. He is also an accomplished printmaker and photographer whose work has been the subject of more than 200 solo exhibitions in more than 20 countries. Life and works of Margaret Olley. The Visible World: Samuel van Hoogstraten's Art Theory and the Legitimation of Painting in the Dutch Golden Age, Weststeijn. Samuel van Hoogstraten. Painter and writer, Hoogstraten is best remembered for his experiments in perspective. His perspective box, 'A Peepshow', is the best surviving example of this aspect of his art.

His preoccupation with perspective may have been stimulated by his contact with Carel Fabritius when they were both students of Rembrandt in Amsterdam. Hoogstraten was a native of Dordrecht, where he was first trained by his father. He moved to Amsterdam shortly after his father's death in December 1640 and received further training in the studio of Rembrandt, at the time when Carel Fabritius was also there. View of an Interior, or The Slippers (traditional title, given in the 19th century) From 1839-42 to 1877-83, this painting bore Pieter de Hooch's monogram with the not unlikely date of 1658. Contemporary with the early work of de Hooch and Vermeer, it was formerly attributed to each but is quite distinct from the latter's experiments.

Alluding - as does the Ter Borch-inspired picture in the background - to the vain and gallant pastimes of the absent mistress of the house, this is a subtly moralistic piece, a fascinating exercise in perspective, and a painting of poetic calm. Perspective and poetry What is striking here at first is the absence of subject, or at least of any figures to animate this peaceful Dutch interior. Hoogstraten focused all his attention on the rigorous spatial construction.

Live portrait of a teenage girl in charcoal. Charcoal Tutorial. Sol Lewitt. Counihan Connection: The Curator. Varvaressos1980. Varvaressos1978. Fruitful corsage, bridal bouquet, lingering veils, (1983) by Susan Norrie. During the 1980s Susan Norrie rapidly became one of Australia’s most prominent painters. Her considerable technical ability was matched with an intellectual inquiry into the nature of painting after modernism. Art Gallery of New South Wales - Archive: Darkness & Light: Caravaggio and his World. Michelangelo Merisi da Caravaggio (1571-1610) arrived in Rome around 1592 to seek his fortune as a painter. In the 'eternal city' he emerged as the leader of a new artistic era, helping shape the 'baroque', instigating a revolution in style.