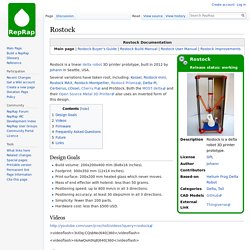 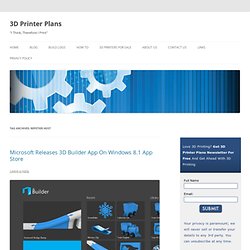 The RapMan was developed by Belgian design studio, Unfold and it was the first kit printer to use clay as a printing material. Keep used a Delta type design for his 3D printer. He said “my aim has been to use parts that can either be made with basic DIY tools and skills, or ordered off the internet. The design is specifically for printing in clay but could be adapted to work with other materials. Many other self build 3D printers use parts printed in plastic but with this project I did not want to be reliant on already having access to a 3D printer.” According to Keep the information on his website is not blue print’s for the printer, but rather a documentation of the design of it. The printer itself is based on a bootstrap delta style 3D printer which is ideal for printing in clay. 3D Printer Plans - Nightly. Kossel - RepRapWiki - Nightly. Kossel Release status: experimental Kossel is a parametric delta robot 3D printer, built in 2012 by Johann in Seattle, USA, based on his Rostock prototype. 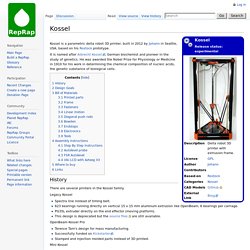 It is named after Albrecht Kossel, German biochemist and pioneer in the study of genetics. He was awarded the Nobel Prize for Physiology or Medicine in 1910 for his work in determining the chemical composition of nucleic acids, the genetic substance of biological cells. History There are several printers in the Kossel family. 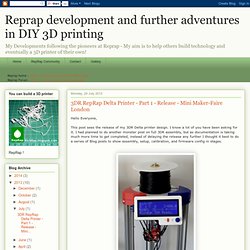 I know a lot of you have been asking for it. I had planned to do another monster post on full 3DR assembly, but as documentation is taking much more time to get completed, instead of delaying the release any further I thought it best to do a series of Blog posts to show assembly, setup, calibration, and firmware config in stages. 3DR (V2_001) Release. 3DR attracted a lot of attention for the entire Maker-Faire day, much more than I expected. Here are a few photo's of some of the objects we printed using the fine filament faberdashery provided to all exhibitors during the faire. 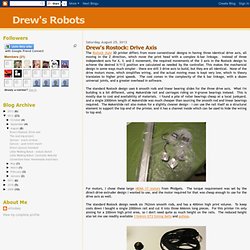 Instead of three independent axis for X, Y, and Z movement, the required movements of the 3 axis in the Rostock design to achieve the desired X/Y/Z position are calculated as needed by the controller. This makes the mechanical design in some ways much simpler - there are still 3 drive axis to build, but they are all identical. None of the drive motors move, which simplifies wiring, and the actual moving mass is kept very low, which in theory translates to higher print speeds.

The cost comes in the complexity of the 6 bar linkage, with a dozen universal joints, and a greater overhead in software. The standard Rostock design uses 6 smooth rods and linear bearing slides for the three drive axis. For motors, I chose these large NEMA 17 motors from Phidgets. John Ecker - Google+ - My vision on what the Rostock 3D printer delta bot(by… 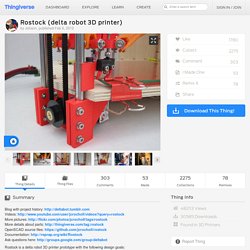