Hu tieu, a Vietnamese dish spiced with prosperity and climate change. On a visit last month to the town of My Tho, the capital of the Tien Giang province in Vietnam’s Mekong Delta, I found a riverside restaurant that served the local specialty, a dish called hu tieu. 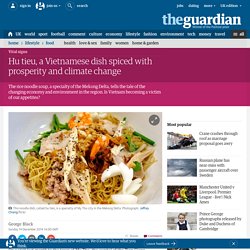 It’s a delicious soup, dense with stretchy rice noodles and topped with succulent locally farmed shrimp. These two ingredients of hu tieu have set the delta on a remarkable path to prosperity. In provinces like Tien Giang and neighboring Ben Tre, as one drives east toward the South China Sea, the landscape is stitched together with fertile rice paddies and brackish ponds teeming with shrimp. This transformation has taken place in just one generation. As late as 1990, 15 years after the Vietnam war ended, the country faced the threat of famine, and rice was strictly rationed. Meanwhile, tempted by the big profits reaped from aquaculture over the past couple of decades, many other farmers have converted their rice fields into shrimp farms. It’s no wonder so many farmers have switched to shrimp. Big money fails to stop flooding in Vietnam metro. Kha Van Can Street in Thu Duc District is one of many spots in Ho Chi Minh City prone to flooding. 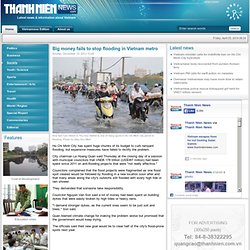 Photo by Diep Duc Minh Ho Chi Minh City has spent huge chunks of its budget to curb rampant flooding, but expensive measures have failed to rectify the problem. City chairman Le Hoang Quan said Thursday at the closing day of a session with municipal councilors that VND8.178 trillion (US$387 million) had been spent since 2011 on anti-flooding projects that were "not really effective. " Councilors complained that the flood projects were fragmented as one flood spot cleared would be followed by flooding in a new location soon after and that many areas along the city's outskirts still flooded with every high tide or rain shower. They demanded that someone take responsibility. Councilor Nguyen Van Son said a lot of money had been spent on building dykes that were easily broken by high tides or heavy rains. "I demand stronger dykes, as the current ones seem to be just soil and trees," Son said.

Local Knowledge and Governance for Flood Management in the Mekong Delta Vietnam in the Context of Climate Change. Applying Robust Decision Making: Planning for Water and Flood Risk Management. Loblolly House - WikiArquitectura - Buildings of the World. Introduction A unique approach to building prefab with a striking design aesthetic. 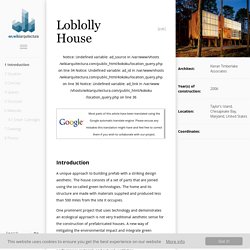 The house consists of a set of parts that are joined using the so-called green technologies. The home and its structure are made with materials supplied and produced less than 500 miles from the site it occupies. One prominent project that uses technology and demonstrates an ecological approach is not very traditional aesthetic sense for the construction of prefabricated houses.

A new way of mitigating the environmental impact and integrate green technologies in comfortable spaces. Situation Loblolly House, is named after the species of pine trees that form the forest that is built on the island Taylor, Chesapeake Bay, Meryland, EE. Concept The foundations are the trees, piles of wood, both pragmatic and poetic. Pragmatic because it minimizes interruptions in the ground and poetic because housing is literally founded on the tree, is a house within and between trees. Spaces Structure Materials Smart Cartridges. Center of Water Management and Climate Change. PhD vacancy announcements UDW PhDs Vietnam A PhD opening for interdisciplinary research in the field of delta planning and management in urbanizing deltas Within the Department of Integrated Water Systems and Governance, UNESCO-IHE, Delft the water management chairgroup has an opening for a Vietnamese PhD candidate for interdisciplinary research projects in the area of delta planning and management. 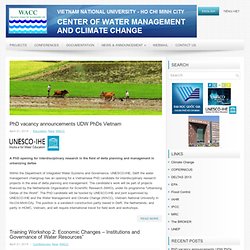 The candidate’s work will be part of projects financed by the Netherlands Organisation for Scientific Research (NWO), under its programme “Urbanising Deltas of the World”. The PhD candidate will be hosted by UNESCO-IHE and joint supervised by UNESCO-IHE and the Water Management and Climate Change (WACC), Vietnam National University in Ho-Chi-Minh-City. The position is a sandwich construction partly based in Delft, the Netherlands, and partly in HCMC, Vietnam, and will require international travel for field work and workshops.