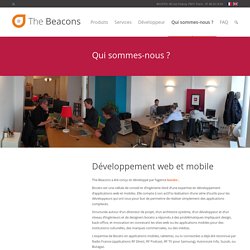 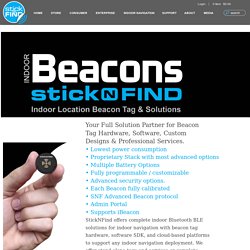 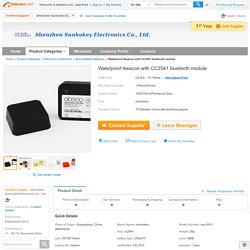 Easy and Rapidly to customize a casing in very low cost; 2. Waterproof, dustproof and shockproof case supports the outdoor and indoor using 3. Defining your iBeacon strategy: the hardware. Proximity-aware applications are gaining momentum and, many businesses are wondering how to benefit from it. 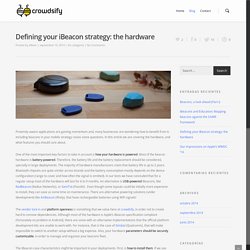 Including beacons in your mobile strategy raises some questions. In this article we are covering the hardware, and what features you should care about. One of the most important key factors to take in account is how your hardware is powered. Most of the beacon hardware is battery-powered. Therefore, the battery life and the battery replacement should be considered, specially in large deployments. The vendor lock-in and platform openness is something that we value here at crowdsify, in order not to create hard to remove dependencies. The iBeacon case characteristics might be important in your deployments. Lastly but not less important, the price. Waterproof iBeacon CR2477 battery powred ble ibeacon iBeacon Android, View ibeacon, MINEW Product Details from Shenzhen Minew Technologies Co., Ltd. on Alibaba.com.

Realty Beacon – iBeacons for Real Estate. iBeacon and BLE hardware: a commercial comparison. iBeacon was announced by Apple in June 2013. 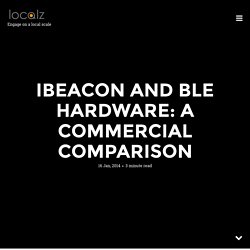 Since then, a number of companies developed iBeacon compatible emitter devices. We’ve collated the most-comprehensive overview of commercially available iBeacon hardware. Our analysis includes: iBeacon technology, cloud services,  How to Develop an iBeacon App. Buying or deploying a Bluetooth LE capable beacon is like one hand clapping if there’s no app to hear. 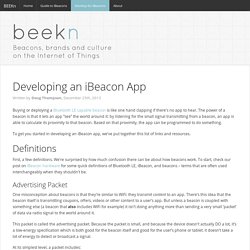 The power of a beacon is that it lets an app “see” the world around it: by listening for the small signal transmitting from a beacon, an app is able to calculate its proximity to that beacon. Based on that proximity, the app can be programmed to do something. To get you started in developing an iBeacon app, we’ve put together this list of links and resources. Definitions First, a few definitions. Advertising Packet. Can I develop iBeacon application with the iOS simulator? Building an iBeacon App. So you’ve decided you want to take the plunge into the pool of hyperlocality by adding iBeacons to your app. 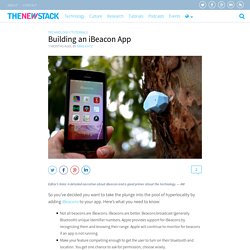 Here’s what you need to know: Not all beacons are iBeacons. iBeacons are better. Beacons broadcast (generally Bluetooth) unique identifier numbers. Apple provides support for iBeacons by recognizing them and knowing their range. Tutorial: Swift based iBeacon App Development with CoreLocation on App – iBeaconModules.us. We've had a number of customers who want to use Apple's new programming language Swift to develop iBeacon applications, so we decided to develop a tutorial to make it easier to get up and running. 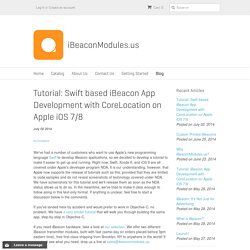 Right now, Swift, Xcode 6, and iOS 8 are all covered under Apple's developer program NDA. It is our understanding, however, that Apple now supports the release of tutorials such as this, provided that they are limited to code samples and do not reveal screenshots of technology covered under NDA. We have screenshots for this tutorial and we'll release them as soon as the NDA status allows us to do so. In the meantime, we've tried to make it clear enough to follow along in this text-only format. If anything is unclear, feel free to start a discussion below in the comments.

Integrating iBeacon With Your Apps – The BeaconDemo Project. Welcome to the world of beacons! 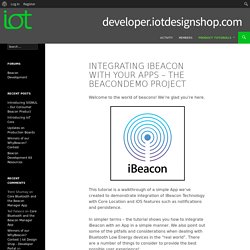 We’re glad you’re here. This tutorial is a walkthrough of a simple App we’ve created to demonstrate integration of iBeacon Technology with Core Location and iOS features such as notifications and persistence. In simpler terms – the tutorial shows you how to integrate iBeacon with an App in a simple manner. We also point out some of the pitfalls and considerations when dealing with Bluetooth Low Energy devices in the “real world”. There are a number of things to consider to provide the best possible user experience! Here’s what we’re going to cover: Core Location Concepts - How the features of Core Location on iOS can be used to detect and range beacons in the environment.Practical Considerations - What are the ‘gotchas’ of dealing with bluetooth low energy (BLE) devices in the real world, and what do you need to keep in mind when designing for beacon-enabled Apps? 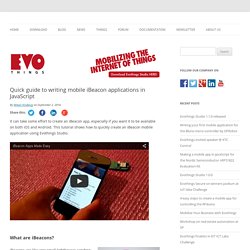 It can take some effort to create an iBeacon app, especially if you want it to be available on both iOS and Android. This tutorial shows how to quickly create an iBeacon mobile application using Evothings Studio. What are iBeacons? How to Develop an iBeacon App. Locate Beacon pour iPhone, iPod touch et iPad dans l’App Store sur iTunes. Developing iOS 7 Applications with iBeacons Tutorial. If you're new here, you may want to subscribe to my RSS feed or follow me on Twitter. Thanks for visiting! Have you ever wished that your phone could show your location inside a large building like a shopping mall or baseball stadium?

Sure, GPS can give you an idea on which side of the building you are. But good luck getting an accurate GPS signal in one of those steel and concrete sarcophaguses. iBeacon for Developers. Apple's iBeacon gets fun. Apple's iBeacon system has been widely ignored and is poorly understood. Yet it's one of the most transformative mobile technologies to come along in the last 10 years. Reality matters — iOS 8 pushes location context to a new level: lock... Yesterday Apple rolled out the latest version of its mobile platform, iOS 8. If you’ve been following the news, then you’re already aware that engineers at Apple are extremely bullish about how next generation hardware and software will further contextual computing. The new HomeKit and HealthKit frameworks, for example, allow your iDevices to store relevant data from your health tracking and home automation apps.

The potential it offers for contextually-aware solutions is tremendous. The feature that excites us the most, however, is Suggested Apps - a whole new way to leverage proximity to power real world intent. The background on Suggested Apps. What is iBeacon? An explanation and tutorial for iOS 7. This tutorial has now been updated to work for iOS8 too. Enjoy At Apple's special event in September 2013 they announced their implementation of a Bluetooth Low Energy (BLE) profile for micro-location and integration of geofencing capabilities into their SDK. Creating a treasure hunt app using an iPad and an iPhone - Tutorial. In this tutorial I will show how to use iBeacon - Apple's indoor proximity system. We're going to build a treasure hunt where the iPad acts as the treasure and the iPhone acts as the hunter which tells you when you're getting warmer.

If you want to following along with this tutorial the [is available to download here][Source]. Creating the project We're going to use a single code base for both the treasure (transmitter) and the hunter (receiver). The code will determine whether it's running on an iPhone or iPad and configure itself accordingly.