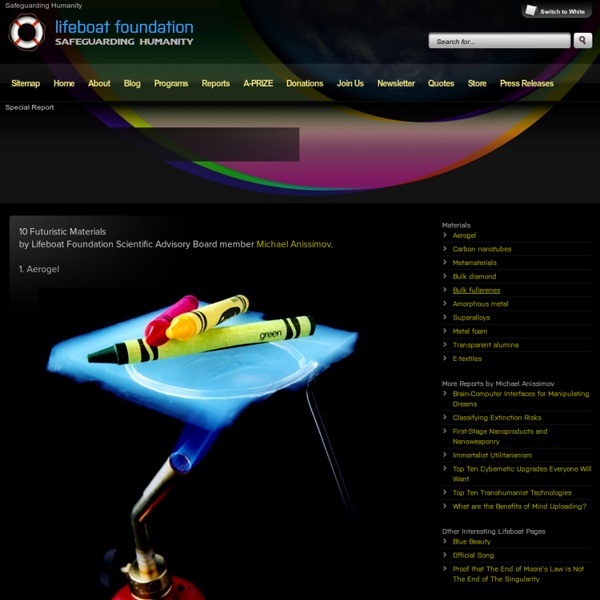 Lifeboat Foundation Safeguarding Humanity Skip to content Switch to White Special Report 10 Futuristic Materials by Lifeboat Foundation Scientific Advisory Board member Michael Anissimov. 1. Aerogel protecting crayons from a blowtorch. This tiny block of transparent aerogel is supporting a brick weighing 2.5 kg. Aerogel holds 15 entries in the Guinness Book of Records, more than any other material. Carbon nanotubes are long chains of carbon held together by the strongest bond in all chemistry, the sacred sp2 bond, even stronger than the sp3 bonds that hold together diamond. “Metamaterial” refers to any material that gains its properties from structure rather than composition. We’re starting to lay down thick layers of diamond in CVD machines, hinting towards a future of bulk diamond machinery. Diamonds may be strong, but aggregated diamond nanorods (what I call amorphous fullerene) are stronger. Transparent alumina is three times stronger than steel and transparent. inShare28 Materials

10 Surprisingly Brutal Facts About Dragonflies Animals If somebody asked you to list all the insects you liked, you could probably give an honest answer in the same breath it takes you to violently exhale after being asked such a ridiculous question. Because unless you’re an entomologist, the answer is always the same: butterflies, dragonflies, and ladybugs—pretty and harmless, and infinitely unlikely to burrow under your skin while you sleep. But give a dragonfly a chance to grow three feet long, and suddenly they don’t seem quite so harmless.

Flying drone controlled with mind power Researchers in China have produced a system to control a quad-rotor drone with the mind Image Gallery (4 images) Researchers based at Zhejiang University in China have produced a system for controlling a quad-rotor unmanned aerial vehicle with the mind. Dubbed "Flying Buddy 2", the system uses a standard, commercially-available Electroencephalogram (EEG) headset, a computer and a Parrot AR Drone. The computer processes the data received from the EEG and converts it into control commands which are beamed to the drone via a Wi-Fi connection. The Leap: Gesture control like Kinect, but cheaper and much higher resolution It seems Minority Report-style computer interfaces might arrive a whole lot sooner than we expected: A new USB device, called The Leap, creates an 8-cubic-feet bubble of “interaction space,” which detects your hand gestures down to an accuracy of 0.01 millimeters — about 200 times more accurate than “existing touch-free products and technologies,” such as your smartphone’s touchscreen… or Microsoft Kinect. Before you read any further, watch the video below. It’s really rather awesome — and apparently the video is footage of a real The Leap unit, rather than a computer rendering (you know a device is serious when the The is part of the product name).

How to Build your own Tesla Coil Once you’ve seen a big home-built Tesla coil in operation, you may decide you’ve got to have one too, even if it’s just a tabletop version to play around with. There are companies offering detailed plans and DIY kits containing all materials needed, but you quickly come to the realization that their expense may be prohibitive ($30 for a micro version to $1100+ for big performers.) See also: Amazing Tesla Coil High Voltage Gallery

25 Best Space Sim and Shooting Games for Android Space games in general and space shooters in particular are a feast for your eyes and fingers. In their predominant majority, space games look vibrant, colorful – a neon-induced spectacle. We have decided to include pure space shoot-em-up’s as well as the games that encompass shump elements with strategy, thus adding a great deal of micro-management and variety in terms of gameplay. Without much ado, here is our today’s list in no particular order. Airbus unveils its 2050 vision for ‘Smarter Skies’ Global aircraft manufacturer Airbus today releases the latest instalment of the Future by Airbus, its vision for sustainable aviation in 2050 and beyond. For the first time the vision looks beyond aircraft design to how the aircraft is operated both on the ground and in the air in order to meet the expected growth in air travel in a sustainable way. Charles Champion, Executive Vice President Engineering at Airbus, says: “Our engineers are continuously encouraged to think widely and come up with `disruptive’ ideas which will assist our industry in meeting the 2050 targets we have signed up to. These and the other tough environmental targets will only be met by a combination of investment in smarter aircraft design and optimising the environment in which the aircraft operates. That is why our latest Future by Airbus Smarter Skies concepts focus on not just what we fly but, how we may fly in 2050 and beyond.”

Fast & Secure: Sleek Fingerprint-Scanning Door Handle Lock Opening a door is usually done in a single motion – we take for granted that this is just not possible when it comes to one with a locking mechanism, whether it be low-tech like a key or high-tech like an iris scanner. Most fingerprint-reading door locks require that you depress an area, listen for a click or maybe look for a light, then grab the handle and go – not a big deal, but definitely one more step than necessary. Donguk Seo proposes a simpler model that works with a single motion – just grab, press and push or pull all in the same simple motion, while an LED on the end lets you know if there is any issue with your first try.

Coilgun Handgun Learn how to make a simple coilgun using only a few parts that are fairly easy to obtain. Be Willing to spend more than a week on this and you might need a few heavy power tools (Only to make good projectiles). I built my first one in only a week after I had all the parts. Coilgun Principal: Coilguns(Pulse Accelerators), like railguns(Linear Accelerators), use intense electromagnetic fields to propel objects at incredible velocities unreachable with modern gas driven weaponry (given enough stored energy of course). This coil gun is known as a reluctance coil gun.

ISIS weapons being captured by Canadian woman working to disarm terrorists Now we know how ISIS built such an extensive network of tunnels beneath Mosul to hide and store munitions. The terror network managed to make its own tunnel-boring machine (see photo above), a hideous but effective part of the group's arsenal. The discovery of the ISIS machine is credited to the Iraqi Army’s 9th Division, after which Devin Morrow, a technical adviser with Conflict Armament Research, analyzed the machine. Most days Morrow dons a bulletproof vest and ventures to the front line of Iraq's battle against ISIS to inspect the latest spoils of a grinding and bloody war. The 30-year-old Canadian woman is tasked with analyzing seized weaponry from ISIS -- piece by piece -- and uncovering its source and pathway to the terrorist network. Much of the illegally traded weapons are small arms but some -- like the ISIS-made tunnel machine -- demonstrate a level of sophistication never seen before by such a group, according to Morrow.

Japanese geek builds awesome giant beetle robot for some reason (video) We are all doomed. A Japanese man from Ibaraki Prefecture with too much time has built a gigantic bug mecha that not only looks awesome but also actually works. Takahashi-san is 60 and has begun building the thing in 1998 and now owns a fifteen ton robot. The monster is an impressive eleven meters long. The mecha, dubbed Kabutom RX-03, is equipped with a cool control panel, can be remote-controlled (which is especially awesome) and is shaped like a rhinoceros beetle.