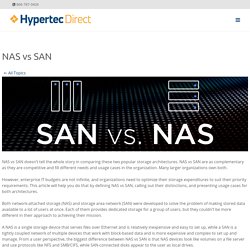 NAS vs SAN are as complementary as they are competitive and fill different needs and usage cases in the organization. Many larger organizations own both. However, enterprise IT budgets are not infinite, and organizations need to optimize their storage expenditures to suit their priority requirements. This article will help you do that by defining NAS vs SAN, calling out their distinctions, and presenting usage cases for both architectures. Both network-attached storage (NAS) and storage area network (SAN) were developed to solve the problem of making stored data available to a lot of users at once. A NAS is a single storage device that serves files over Ethernet and is relatively inexpensive and easy to set up, while a SAN is a tightly coupled network of multiple devices that work with block-based data and is more expensive and complex to set up and manage. Names of the Planets. Names of the Planets Most ancient cultures recognized seven “planets” consisting of sun and moon and the five planets visible in the sky. 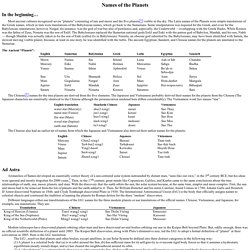 The Latin names of the Planets were simple translations of the Greek names, which in turn were translations of the Babylonian names, which go back to the Sumerians. Some interpretation was required for the Greek, and even for the Babylonian, translations, however. Nergal, for instance, was the god of war but also of pestilence and, especially, the Underworld —overlapping with the Greek Hades. While Kronos was the father of Zeus, Ninurta was the son of Enlil. The Ancient “Planets”: The Chinese names for the true planets are derived from the five elements.

Descent 4 cheat codes. Amazon Prime Membership Discounts for Low-Income Shoppers. Amazon has rolled out a new deal for Americans on government assistance: a discount of nearly half off Amazon Prime subscriptions. 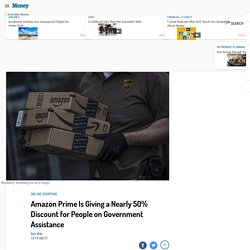 “We designed this membership option for customers receiving government assistance to make our everyday selection and savings more accessible, including the many conveniences and entertainment benefits of Prime,” said Greg Greeley, Vice President of Amazon Prime, in a press release. Instead of the usual prices of $10.99 per month or $99 per year, anyone with a valid Electronic Benefits Transfer (EBT) card will only have to pay $5.99 a month for Amazon Prime. PayPal vs. Venmo vs. Square: Best Mobile Payment Apps? Many people don't regularly carry cash around anymore, and when it comes to paying your buddies back, this has become a problem. 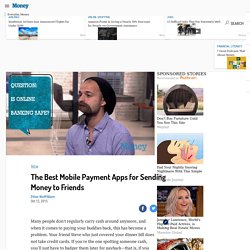 Your friend Steve who just covered your dinner bill does not take credit cards. If you're the one spotting someone cash, you'll just have to badger them later for payback—that is, if you remember. According to a (conveniently self-promotional) study published by PayPal, these "forgotten" debts between friends create awkwardness and strain relationships. Fortunately, a slew of apps and payment services have been created as solutions. Unfortunately, it's unclear which service works best for life's many varying situations, and what the safety concerns are when using them. PayPal How to use it: Use your PayPal account to send and receive money using the app or website. What it's good for: PayPal has been the standard in anonymous Internet payments for years. Risks: It's safe enough to be the standard in payments for eBay (which owned PayPal until very recently). 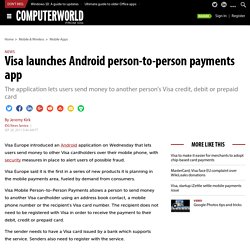 Visa Europe said it is the first in a series of new products it is planning in the mobile payments area, fueled by demand from consumers. Visa Mobile Person-to-Person Payments allows a person to send money to another Visa cardholder using an address book contact, a mobile phone number or the recipient's Visa card number. The recipient does not need to be registered with Visa in order to receive the payment to their debit, credit or prepaid card. The sender needs to have a Visa card issued by a bank which supports the service. Senders also need to register with the service. Visa Europe said the Android application is English language and will support transfers in one currency for Visa and V Pay -- a type of debit card -- for European users. Send news tips and comments to jeremy_kirk@idg.com. What is Google Wallet? Be prepared -- Google is getting ready to pick your pocket. 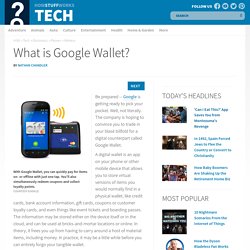 Well, not literally. The company is hoping to convince you to trade in your blasé billfold for a digital counterpart called Google Wallet. A digital wallet is an app on your phone or other mobile device that allows you to store virtual versions of items you would normally find in a physical wallet, like credit cards, bank account information, gift cards, coupons or customer loyalty cards, and even things like event tickets and boarding passes.

The information may be stored either on the device itself or in the cloud, and can be used at bricks-and-mortar locations or online.