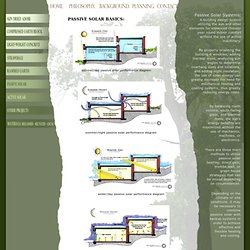 Bradford Research and Extension Center: Building a Passive Solar Greenhouse. Greenhouse: Under the polycarbonate. Polycarbonate siding on greenhouse I’ve received a few emails from people curious to know more about the greenhouse. 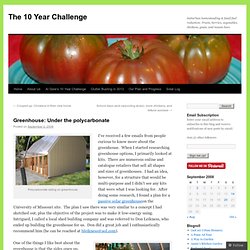 When I started researching greenhouse options, I primarily looked at kits. There are numerous online and catalogue retailers that sell all shapes and sizes of greenhouses. I had an idea, however, for a structure that would be multi-purpose and I didn’t see any kits that were what I was looking for. After doing some research, I found a plan for a passive solar greenhouseon the University of Missouri site. Deep Winter Greenhouses : Statewide : Regional Sustainable Development Partnerships. 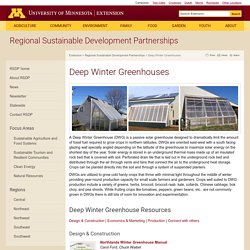 DWGs are oriented east-west with a south facing glazing wall specially angled depending on the latitude of the greenhouse to maximize solar energy on the shortest day of the year. Solar energy is stored in an underground thermal mass made up of an insulated rock bed that is covered with soil. Perforated drain tile that is laid out in the underground rock bed and distributed through the air through vents and fans that connect the air to the underground heat storage. Greenhouses. Main > Housing and construction. 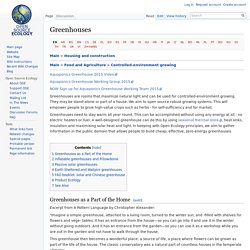 Who Says You Can't Grow Food All Year Round And For Cheap. Interested in building your own underground greenhouse? 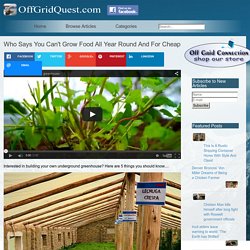 Here are 5 things you should know… This low-tech technology is a true gift from mother nature. For as little as $300 you can create an underground greenhouse that will provide enough food to live on year-round. A walipini, meaning “place of warmth” from the Amaraya Indian language, is an underground greenhouse with a transparent (usually plastic) covering that stays warm by passively soaking up the sun’s heat and absorbing the earth’s thermal energy. Fruits and vegetables can be grown year-round, making it ideal for communities in colder locations that can’t usually grow their own fresh and local produce during certain parts of the year. This type of farming method isn’t exactly new, Walipinis have been used in South and Central America for decades, including one that can grow bananas at 14,000 feet in the Andes.

The institute published a DIY manual on how to build such a structure. Via AwesomeJelly. A $300 underground greenhouse offers a year-round DIY growing sanctuary. For growers unlucky enough to be living at high elevations or further than arms length from the equator, frost and cold relentless winds are constant enemies. 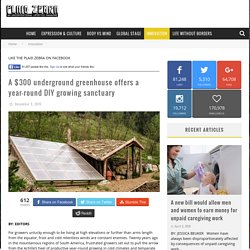 Twenty years ago in the mountainous regions of South America, frustrated growers set out to pull the arrow from the Achille’s heel of productive year-round growing in cold climates and temperate climates. Their solution? A DIY greenhouse that can be built for less than $300. Traditional greenhouses composed of glass walls are typically as expensive as they are fragile. And while “common sense” would lead you to believe that maintaining the heat necessary for optimal growing conditions would be stretching closer to the sun or manufacturing its rays with an expensive lighting system, designers of the walipini decided to make use of an alternative natural source of heat. By digging just six to eight feet below the earth, growers can take advantage of what is called a thermal constant. Serre et maison solaire. Can the Midwest Grow Citrus? 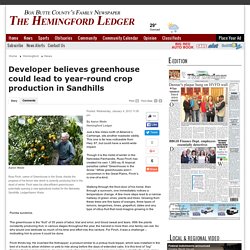 This one is far less noticeable from Hwy. 87, but could have a world-wide impact. Though it is the midst of winter in the Nebraska Panhandle, Russ Finch has created his own 1,360-sq. -ft. tropical paradise called “Greenhouse in the Snow.” While greenhouses aren’t uncommon in the Great Plains, Finch’s is one-of-a-kind. Walking through the front door of his home, then through a sunroom, one immediately notices a temperature change.

The greenhouse is the “fruit” of 35 years of labor, trial and error, and blood sweat and tears. Finch thinks big. “There are no production greenhouses on the Great Plains, because the cost is too high to run them for 12-months per year,” said Finch. The heating system for this greenhouse is a ¾ hp blower motor which circulates air through 1.100 ft. of six-inch tube, which is buried eight feet under the earth. Western Nebraska Development Network - Greenhouse in the Snow - Alliance Nebraska. GeoThermal Greenhouse Build. CRMPI. Forest Gardens with Jerome Osentowski of Central Rocky Mountain Permaculture Institute. Eco systems design, inc. - Permaculture and Architecture in Harmony with Nature. CRMPI Tropical Greenhouse Planting. 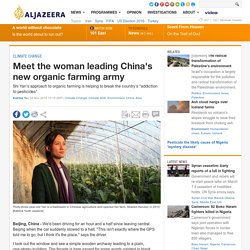 "This isn't exactly where the GPS told me to go, but I think it's the place," says the driver. I look out the window and see a simple wooden archway leading to a plain, one-storey building. The facade is bare except for some words painted in black capital letters. "Who is your farmer? Where does your food come from? " "Yes," I reply. I've arrived at Shared Harvest, a 2.6-hectare farm in the countryside 70km north of the capital, to meet Shi Yan, its founder and chief executive. Yan greets me warmly, wearing a knitted green cardigan and long purple scarf. Opened in 2012, Shared Harvest is not only a completely organic farm, it was also one of the first in China to follow the Community Supported Agriculture (CSA) model, where consumers buy meat and vegetables directly from producers. Passive Solar Greenhouses in Mongolia.