Python Design Patterns. Python behind the scenes #6: how Python object system works. As we know from the previous parts of this series, the execution of a Python program consists of two major steps: The CPython compiler translates Python code to bytecode.The CPython VM executes the bytecode. 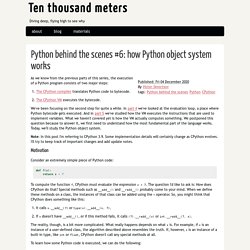 We've been focusing on the second step for quite a while. In part 4 we've looked at the evaluation loop, a place where Python bytecode gets executed. And in part 5 we've studied how the VM executes the instructions that are used to implement variables. What we haven't covered yet is how the VM actually computes something. Practical-python. Function overloading in Python. Function overloading is the ability to have multiple functions with the same name but with different signatures/implementations. 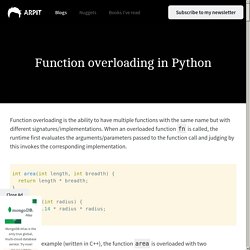 When an overloaded function fn is called, the runtime first evaluates the arguments/parameters passed to the function call and judging by this invokes the corresponding implementation. int area(int length, int breadth) { return length * breadth; } float area(int radius) { return 3.14 * radius * radius; } In the above example (written in C++), the function area is overloaded with two implementations; one accepts two arguments (both integers) representing the length and the breadth of a rectangle and returns the area; while the other function accepts an integer radius of a circle.

When we call the function area like area(7) it invokes the second function while area(3, 4) invokes the first. Things you're probably not using in Python 3 - but should - Data, what now? turns. Many people started switching their Python versions from 2 to 3 as a result of Python EOL. 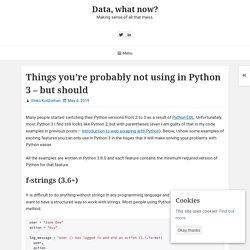 Unfortunately, most Python 3 I find still looks like Python 2, but with parentheses (even I am guilty of that in my code examples in previous posts – Introduction to web scraping with Python). Below, I show some examples of exciting features you can only use in Python 3 in the hopes that it will make solving your problems with Python easier. All the examples are written in Python 3.8.0 and each feature contains the minimum required version of Python for that feature. f-strings (3.6+) It is difficult to do anything without strings in any programming language and in order to stay sane, you want to have a structured way to work with strings. A Guide to Python's Magic Methods « rafekettler.com. Rafe Kettler Copyright © 2012 Rafe Kettler Version 1.17. 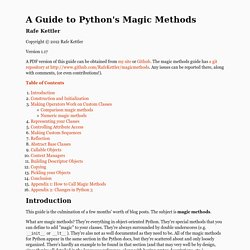 Applying mypy to real world projects. January 2020 Some hints and tips for getting started with Mypy and introducing it to existing projects I think static typing can be very oversold. 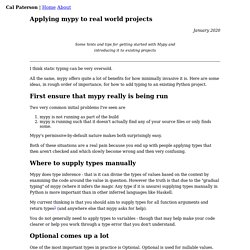 All the same, mypy offers quite a lot of benefits for how minimally invasive it is. Here are some ideas, in rough order of importance, for how to add typing to an existing Python project. First ensure that mypy really is being run Two very common initial problems I've seen are mypy is not running as part of the build mypy is running such that it doesn't actually find any of your source files or only finds some.

Mypy's permissive-by-default nature makes both surprisingly easy. Both of these situations are a real pain because you end up with people applying types that then aren't checked and which slowly become wrong and then very confusing. Where to supply types manually Mypy does type inference - that is it can divine the types of values based on the context by examining the code around the value in question. Optional comes up a lot. Python types intro - FastAPI. Python 3.6+ has support for optional "type hints". 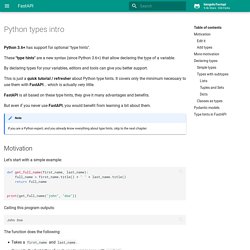 These "type hints" are a new syntax (since Python 3.6+) that allow declaring the type of a variable. By declaring types for your variables, editors and tools can give you better support. Dicts are now ordered, get used to it. There were several moments over the last few weeks when I heard people discuss differences between Python lists and dicts and one of the first ones mentioned was that lists are ordered and dicts are not. 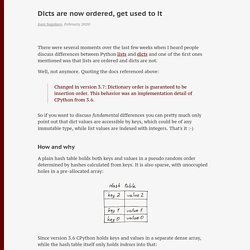 Well, not anymore. Quoting the docs referenced above: Style Guide for Python Code. This document gives coding conventions for the Python code comprising the standard library in the main Python distribution. Please see the companion informational PEP describing style guidelines for the C code in the C implementation of Python [1]. This document and PEP 257 (Docstring Conventions) were adapted from Guido's original Python Style Guide essay, with some additions from Barry's style guide [2]. This style guide evolves over time as additional conventions are identified and past conventions are rendered obsolete by changes in the language itself. Many projects have their own coding style guidelines. In the event of any conflicts, such project-specific guides take precedence for that project. SLEP009: Keyword-only arguments — Scikit-learn enhancement proposals documentation.

Abstract¶ This proposal discusses the path to gradually forcing users to pass arguments, or most of them, as keyword arguments only. 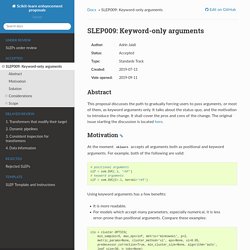 It talks about the status-quo, and the motivation to introduce the change. It shall cover the pros and cons of the change. The original issue starting the discussion is located here. Motivation¶ Python: better typed than you think. Now, let's try out returns.result library, clearly inspired by Haskell's Either monad and do notation. 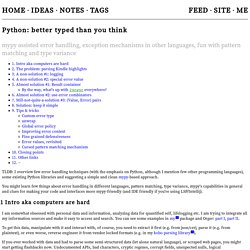 I'm quite glad someone already implemented it and I didn't have to reinvent the wheel here. So, let's try and rewrite the code using returns.result.Result: 19: from returns.result import safe 20: 21: @safe22: def parse_entry(entry: str) -> Highlight: 23: groups = re.search( 24: r'(? P<title>.*)$\n. Is __init__.py not required for packages in Python 3.3+ Structuring Your Project — The Hitchhiker's Guide to Python. By “structure” we mean the decisions you make concerning how your project best meets its objective. 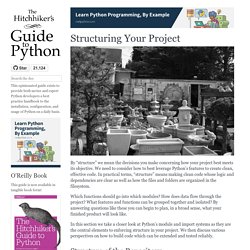 We need to consider how to best leverage Python’s features to create clean, effective code. In practical terms, “structure” means making clean code whose logic and dependencies are clear as well as how the files and folders are organized in the filesystem. Which functions should go into which modules? How does data flow through the project? What features and functions can be grouped together and isolated? How You Can Benefit from Type Hints. How I Learned Python – r y x, r. Every once in a while, people ask me for my recommendations on how to learn Python.

I don’t think I’m a good source for this because I learned computer science in high school, dabbled in statistical coding (Stata and Matlab), and got back into “real”programming through Python. This is a much different path than someone who is going from nothing or Excel into Python. All that said, I’d rather not constantly type out variations of the same thing over and over again, so this post will serve as my go-to link when someone asks me the question.

But first, a PSA: Every good coder is self-taught. One of the bigger misconceptions about CS and CIS majors is that they spend their whole 4 years in college learning how to code constantly, so therefore anyone starting to learn code today has a 4-year deficit to make up just to catch up with the typical fresh CS major. Most of the really good developers spent their free time in both college and high school coding. Best practices for beautiful intelligible code - PyCon 2015. Publishing your own Python package. Packaging Python Projects — Python Packaging User Guide. This tutorial walks you through how to package a simple Python project. It will show you how to add the necessary files and structure to create the package, how to build the package, and how to upload it to the Python Package Index. A simple project This tutorial uses a simple project named example_pkg.

Packaging a python library. Note This is about packaging libraries, not applications. All the advice here is implemented in a project template (with full support for C extensions): cookiecutter-pylibrary (introduction). I think the packaging best practices should be revisited, there are lots of good tools now-days that are either unused or underused. It's generally a good thing to re-evaluate best practices all the time. Comprehensive Python Cheatsheet. A Whirlwind Tour of Python. This website contains the full text of my free O'Reilly report, A Whirlwind Tour of Python. Welcome to Python Cheatsheet! — pysheeet. 28 Jupyter Notebook tips, tricks and shortcuts. If you want to set this behaviour for all instances of Jupyter (Notebook and Console), simply create a file ~/.ipython/profile_default/ipython_config.py with the lines below. 3.