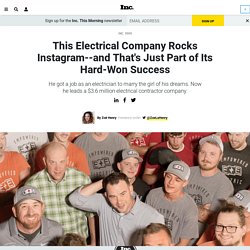 An unexpected call from his future mother-in-law--plus his own fierce determination--led him to start Empowered Electric, which has what's probably the coolest Instagram of any electrical contractor anywhere. --As told to Zoë Henry My mom got pregnant with me when she was 16. I had multiple stepdads. They treated her poorly. Once, we ate pork rinds for a week, because we couldn't afford groceries. I never felt safe or secure. I became an electrician because of my childhood sweetheart, Bridget.

I needed to get a stable job. In my mind, an electrician was the closest real-life thing to a Power Ranger--the hard hat, and the tool belt. An Empowered Electric staffer, seen in a still from one of the company's many online videos. When I started, I sucked. But I didn't like the way that company treated its workers. People in construction talk about a labor shortage, but I don't see it. The Modern Training Manual For Growing Businesses. Enterprise Gamification Software as a Service Platform. 4 Lessons From an Entrepreneur Who Became a Self-Made Billionaire Before Turning 40.

The State of Customer Relationship Management 2019. The customer relationship management (CRM) space has evolved greatly since Siebel Systems was founded in 1993. 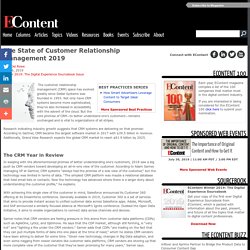 Not only have CRM systems become more sophisticated, they’ve also increased in accessibility with the advent of the cloud. But the core promise of CRM—to better understand one’s customers—remains unchanged and is vital to organizations of all stripes. Research indicating industry growth suggests that CRM systems are delivering on that promise: According to Gartner, CRM became the largest software market in 2017 with $39.5 billion in revenue. Additionally, Grand View Research expects the global CRM market to reach $81.9 billion by 2025. The CRM Year in Review In keeping with the aforementioned promise of better understanding one’s customers, 2018 saw a big push by CRM vendors toward developing an all-in-one view of the customer.

With achieving this single view of the customer in mind, Salesforce announced its Customer 360 offering at its Dreamforce conference. Why CRM Projects Fail and How to Make Them More Successful. Executive Summary The primary reason CRM systems miss the mark in helping companies increase revenue is because they are too often used for inspection, rather than creating improvement in the sales process. 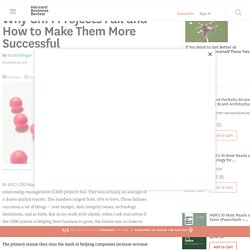 Front-line sales professionals and managers rarely find the majority of these capabilities useful in winning more business for the company. If you want your CRM implementation to increase revenue, you have to re-think your CRM as a tool to do so. That is why you invested in its deployment. Also, integrate your marketing efforts with sales activity. In 2017, CIO magazine reported that around one-third of all customer relationship management (CRM) projects fail. CRMs today also serve a lot of masters, from executives in the C-suite, technology, marketing, finance, and, oh yeah, sales. I saw this clearly at another client where there was a wide range of answers to the question, “Was the CRM implementation a success?” Re-think your CRM as a tool to increase revenue.

How We Analyzed the Nuts and Bolts of 'Good Sales Methodology' and Merged 15 CRMs Into One Effective Solution. In the end, a CRM is just a tool. 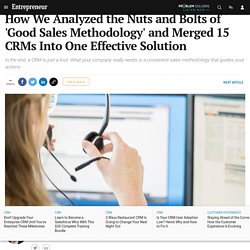 What your company really needs is a consistent sales methodology that guides your actions. April 16, 2019 7 min read Opinions expressed by Entrepreneur contributors are their own. In 2018, my company, Miller Heiman Group, did something crazy: After years of relying on multiple customer relationship management systems (CRMs), endless spreadsheets, numerous marketing systems and disorganized data ... we decided to start over. From scratch. Related: 4 Reasons Why Companies are Choosing CRM Over Traditional Marketing tools This makes sense, because anyone who has worked at a business that's changed ownership, acquired other companies or expanded into other countries understands the headaches associated with working in a multi-CRM environment.

Different business units and regions may use different CRMs, each with its own functionality, data storage process and renewal cycle. Chattanooga, Tennessee has found a way to reinvent itself as a startup center of the South.