Thermal Depolymerization. Nuclear in Indonesia. Problems With Coal Fired Power Plant. LENR & Rossi E-Cat. Thorium Energy (LFTR) Brillouin: "Understanding How LENR Works Will Enable Us to Be First" Robert Godes, inventor of the controlled electron capture reaction (CECR) being commercialized by Brillion Energy Corporation of Berkeley, CA, says that understanding how "cold fusion" works gives them a strong advantage to move ahead of the other players to make it first to market with affordable, clean, distributed nuclear power. by Sterling D. 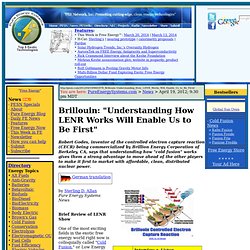 JP/P.J. Leo Three state plantation firms – PT Perkebunan Nusantara (PTPN) III, IV and V — will begin the construction of three biodiesel plants in Dumai, Riau province, before the second half of the year starts. The three plants are expected to absorb Rp 400 billion in total investment. “The plants will be finished in the next 18 months. Pertamina has agreed to purchase the biodiesel from the plants and to prepare a storage facility for the biodiesel at the port in Dumai. Biofuel is currently being sold to retail customers. Dahlan: BUMN Bikin Pabrik Biodiesel Rp5 T. Sapphire Energy, Inc.

Biodiesel from Algae - Information, Resources and Links for Algal, Alga Bio-diesel - CastorOil.in. This is very interesting. 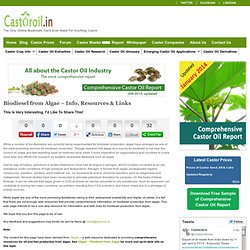 I'd like to share this! While a number of bio-feedstock are currently being experimented for biodiesel production, algae have emerged as one of the most promising sources for biodiesel production. Though research into algae as a source for biodiesel is not new, the current oil crises and fast depleting fossil oil reserves have made it more imperative for organizations and countries to invest more time and efforts into research on suitable renewable feedstock such as algae. Just by way of history, petroleum is widely believed to have had its origins in kerogen, which is easily converted to an oily substance under conditions of high pressure and temperature. Kerogen is formed from algae, biodegraded organic compounds, plankton, bacteria, plant material, etc., by biochemical and/or chemical reactions such as diagenesis and catagenesis.

Next Big Bio-Fuel - ALGAE. Green Power. E-cat could be used for Cooling and Home E-cat Heating and Cooling Units could be Available This Fall « Cold Fusion News. The e-cat low energy nuclear reaction device could be used for cooling or air conditioning homes and buildings as well as heating them, inventor Andrea Rossi announced. 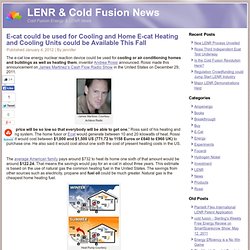 Rossi made this announcement on James Martinez’s Cash Flow Radio Show in the United States on December 29, 2011. James Martinez Courtesy Achieve Radio “The price will be so low so that everybody will be able to get one,” Ross said of his heating and cooling system. The home fusor or Ecat would generate between 10 and 20 kilowatts of heat. Rossi said it would cost between $1,000 and $1,500 US (771.72 to 1158 Euros or £640 to £960 UK) to purchase one. The average American family pays around $732 to heat its home one sixth of that amount would be around $122.24. Heat Pump Courtesy Whatisaheatpump.net Rossi did not how say how the e-cat would cool homes and buildings. “The start will be in the US,” Rossi said. “The first point of development will be in the United States,” Rossi said. 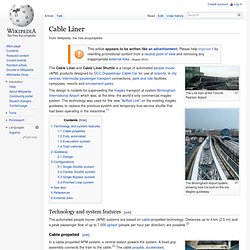 The Birmingham Airport system, showing how it is built on the old Maglev guideway. Technology and system features[edit] The automated people mover (APM) systems are based on cable-propelled technology. Distances up to 4 km (2.5 mi) and a peak passenger flow of up to 7,000 pphpd (people per hour per direction) are possible.[2] Cable propelled[edit] Internationale Seilbahn-Rundschau: Second Cable Liner Shuttle opened in Las Vegas: At 8 p.m. local time on Wednesday, 16 December ...

The DCC Cable Liner in front of the huge MGM CityCenter complex, Photo: Doppelmayr Urban ropeways The new APM built by Doppelmayr Cable Car (DCC) is the main means of transport for the CityCenter mega-project. 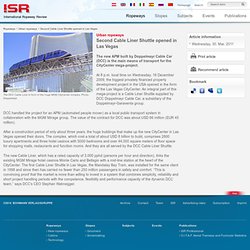 Building on the experience and expertise of the parent company, Doppelmayr Cable Car (DCC) developed an extremely innovative and progressive system for local transit applications – the CABLE Liner. 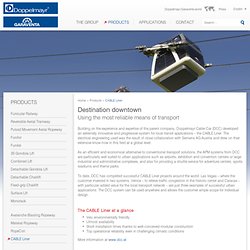 The electrical engineering used was the result of close collaboration with Siemens AG Austria and drew on their extensive know-how in this field at a global level. As an efficient and economical alternative to conventional transport solutions, the APM systems from DCC are particularly well suited to urban applications such as airports, exhibition and convention centers or large industrial and administrative complexes, and also for providing a shuttle service for adventure centers, sports stadiums and theme parks. Garaventa Group - Surface and Aerial Ropeways, Funicular Railways, Urban Transit Systems, Elevators, Mechanical Garaging Systems and Stacker Cranes for high rise warehouses, Gondolas. The Doppelmayr/Garaventa Group’s product portfolio offers wide diversity in depth as well as breadth. 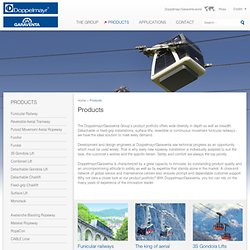 Cable Liner. The Conspiracy to Rule The World. Help.