Sanders: 'Tonight We Served Notice to the Political and Economic Establishment' Update (9:54 PM): A 'Huuuge' victory in New Hampshire, fueled by record-breaking and enthusiastic turnout, is just a taste of things to come, says Bernie Sanders Bernie Sanders took the stage in New Hampshire on Tuesday night after claiming victory, by what appears to be a substantial margin, over Hillary Clinton. 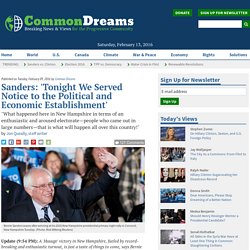 Sanders Tells Clinton: 'Destructive' Henry Kissinger 'No Friend of Mine' President Richard Nixon's notoriously ruthless secretary of state Henry Kissinger—who, among other things, has been accused of being war criminal for his leading role in the covert bombing of Laos and Cambodia during the Vietnam War and the overthrow of the democratically elected government of Chile in 1973—became a heated subject of contrast in Thursday night's Democratic debate between Bernie Sanders and Hillary Clinton. 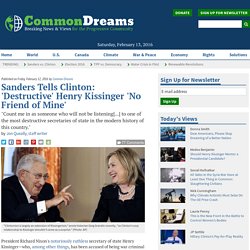 The former secretary of state has worn Kissinger's approval of her as a badge of honor while arguing she is unrivaled among the candidates in terms of her foreign policy experience and repeatedly showcased the support of many former military and State Department officials as evidence of her bona fides. Sanders, however, pointed out that many people, himself included, have a very dim view of Kissinger's historical role in world affairs. The Economy We Want Starts With a Constitutional Amendment by Keith Harrington. What can the new economy movement learn from Senator Bernie Sanders’ epic win in the New Hampshire primary? 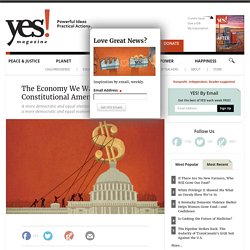 The big takeaway for system-change advocates came just a few minutes into his victory speech when he told a cheering crowd, “We have sent a message that will echo from Wall Street to Washington, from Maine to California, and that is that the government of our great country belongs to all of the people and not just a handful of wealthy campaign contributors and their super PACs.” Obama Just Protected 1.8 Million Acres of Desert. Here’s What They Look Like. President Obama has granted national monument status to nearly 1.8 million acres of California desert, protecting “in perpetuity” the region’s fragile ecosystems and natural resources, the White House said Friday. 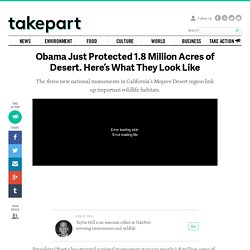 It’s a move that nearly doubles the amount of land the president has set aside for conservation since taking office, and it adds to the 263 million acres of water area Obama has placed under federal protections as well. The three new national monuments—named Mojave Trails, Sand to Snow, and Castle Mountains—connect three existing protected areas and 15 designated wilderness areas. Wildlife conservation groups such as the Wilderness Society, which has worked for more than a decade to get the desert areas protected, hope the protections will help wildlife migrate safely between the Mojave National Preserve area and Joshua Tree National Park.

RELATED: America’s Rivers Could Be the Pathways Animals Need to Adapt to Climate Change Mojave Trails National Monument (Photo: Whitehouse.gov) Clinton comes out against Atlantic offshore drilling, angling to win green voters away from Sanders. Hillary Clinton needs climate activists’ votes more than ever now — and she’s shifting her positions to try to win them. 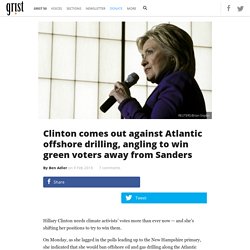 On Monday, as she lagged in the polls leading up to the New Hampshire primary, she indicated that she would ban offshore oil and gas drilling along the Atlantic coast. A Greenpeace campaigner in the crowd at a Clinton campaign event asked if she would “stop oil drilling in the Arctic, the Atlantic, and the Gulf?” Clinton replied, “I’ve already said that I will stop in the Arctic and the Atlantic.” The Kochs Are Ghostwriting America’s Story. Gather round for the word of the day: metanarrative. 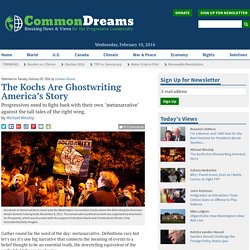 Definitions vary but let’s say it’s one big narrative that connects the meaning of events to a belief thought to be an essential truth, the storytelling equivalent of the unified field theory in physics. Carbon Tax: The Low Oil Price Opportunity. Carbon taxes constitute a widely discussed policy tool for reducing greenhouse gas emissions and slowing humanity’s headlong rush toward catastrophic climate change. 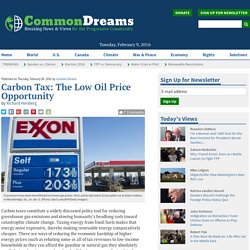 Taxing energy from fossil fuels makes that energy more expensive, thereby making renewable energy comparatively cheaper. There are ways of reducing the economic hardship of higher energy prices (such as rebating some or all of tax revenues to low-income households so they can afford the gasoline or natural gas they absolutely need), but carbon taxes can be a hard sell for two reasons: first, a lot of people just don’t like new taxes of any sort; and second, energy is implicit in the entire economy, so a hefty carbon tax could make daily life more expensive in both obvious and subtle ways.

The hardest time to argue for a carbon tax is when fossil fuel prices are already high. Surely Hillary Clinton Knows Why Wall Street Pays Her. Hillary Clinton speaks during the Step It Up For Gender Equality event in New York City on March 10, 2015. 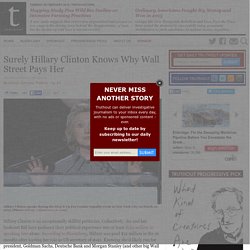 (Photo: JStone / Shutterstock.com) Hillary Clinton is an exceptionally skillful politician. Collectively, she and her husband Bill have parlayed their political experience into at least $125 million in speaking fees alone. According to Bloomberg, Hillary was paid $12 million in the 16 months after leaving her role as US secretary of state. Knowing she'd likely run for president, Goldman Sachs, Deutsche Bank and Morgan Stanley (and other big Wall Street corporations) gladly paid her $2.9 million in speaking fees alone. Clinton is surely aware that Wall Street won't give politicians millions without expecting something big in return. 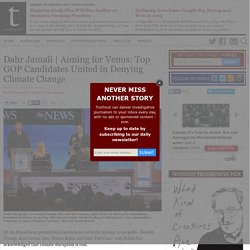 (Stephen Crowley / The New York Times) Of the Republican presidential candidates currently leading in the polls - Donald Trump, Ben Carson, Sen. Marco Rubio and Sen. Ted Cruz - only Rubio has acknowledged that climate disruption is real. However, even Rubio's position should be taken with a grain of salt, as he continues to deny the reality of anthropogenic climate disruption (ACD). Why are we still losing so much rainforest in Indonesia? A hypothesis. Two years ago, Wilmar, the biggest palm oil company in the world, made a commitment to halt deforestation. 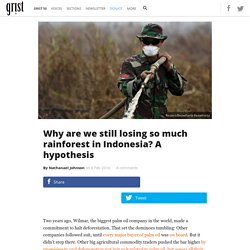 That set the dominoes tumbling: Other companies followed suit, until every major buyer of palm oil was on board. But it didn’t stop there. Other big agricultural commodity traders pushed the bar higher by promising to end deforestation not just as it related to palm oil, but across all their supply chains. Key logging corporations also pledged to stop clearing new land. Damming northern Australia: we need to learn hard lessons from the south. The push for development in northern Australia is gathering momentum, with the government recently releasing a draft of its Northern Australia Infrastructure Facility to help finance large projects. The development of northern Australia will crucially depend on harnessing the north’s abundant available water resources. Over the next five years the government will develop plans to manage these water resources.

However we have to get these plans right from the start to ensure the north’s waters are developed sustainably. To do so, we can start by looking south. Full steam ahead. Inequality Against Democracy: 10 Facts About the 1 Percent. Economic inequality inspired Occupy Wall Street, a movement that in a few short months transformed our political discourse with the concept of the “1 percent” and the “99 percent.” Today the presidential candidacy of Bernie Sanders is altering the political landscape with a call to reduce inequality. Why does this theme resonate with so many voters? How does it intersect with other issues like social justice, national security and the environment?

Investigative Report: A Hospital Built for Murder (Page 1) By 2006, from his base at the Tianjin First Central Hospital, Dr. Shen Zhongyang had performed over 1,600 liver transplantations, boastful Chinese media reports say. Tianjin First, a hospital whose transplant ward he led, was just getting a new, well-funded building courtesy of the local government. Shen had patented his own surgical technique for rapid liver perfusion and extraction, and official transplantation websites were calling him China’s “great transplant pioneer.” Democracy of the Billionaires.

Speaking of the need for citizen participation in our national politics in his finalState of the Union address, President Obama said, “Our brand of democracy is hard.” A more accurate characterization might have been: “Our brand of democracy is cold hard cash.” Big Campaign Cash for Clinton From Monsanto Lobbyist. Democratic presidential hopeful Hillary Clinton during a campaign event at the Boys & Girls Club in Derry, New Hampshire, February 3, 2016.

A Monsanto Co. lobbyist bundled $151,727 for Clinton's campaign over the quarter ending in December 31. (Photo: Richard Perry / The New York Times) A Monsanto Co. lobbyist, who is seen as Hillary Clinton's "main man" in Iowa, was among the top financial bundlers of contributions to benefit Hillary Clinton's run for the White House in the most recent quarter, new Federal Election Commission reports show. Beyond Flint, Michigan: Mainstreaming the Navajo Water Crisis. Sanders Campaign Is a Genuine Progressive Social Movement for Democracy. In Europe, Are the Chemical Industry's Interests Taking Precedence Over People's Lives? If You Want to Win, Go Progressive. Contaminated Water Requires a National Public Health Mobilization. Ruling, not governing: what to do about our lost confidence in the body politic. After five prime ministers in five years, many fear that Australia’s political system is irrevocably broken.

The world’s biggest solar plant takes important step forward. What This Polar Bear With a Plastic Bag in His Mouth Tells Us About the Cost of Our Convenience. One statistic shows just how dramatically our energy system is changing. The world's forests will collapse if we don't learn to say 'no' How We’re Fighting to Stop Big Palm Oil From Destroying Orangutans Last Remaining Home. The World’s Largest Hunting Club Is Auctioning the Chance to Kill Hundreds of Animals. Another Green Victory: Copenhagen Set to Divest from All Fossil Fuels. Ratcheting Tensions, Obama Orders Huge Weapons Increase Along EU-Russia Border.

After 'Astounding the World in Iowa,' Sanders' Revolution Marches On. Final Poll Gives Edge to Sanders, But Has Bernie Already Won Iowa? Sanders: 'Virtual Tie' in Iowa Sends Establishment a Profound Message. Stunning Graphics Show How Plastics Harm Marine Animals. Let’s #CrushPlastic! New York's "Montrose 9" Continue Fight Over "Climate Necessity" of Civil Disobedience. Unemployment Is a Full-Time Job. How Oil and Gas Companies Are Dealing With Low Prices. Circus - Animal Abuse...OPEN YOUR EYES! DON'T BE AN ACCOMPLICE! I VOW TO BOYCOTT ALL CIRCUSES THAT COME TO MY AREA AND TO EDUCATE SMALL CHILDREN AB… Look at the oil spilled in the world's 2nd 'Best Place for Wildlife' She's Been Chained By Her Neck To A Tree For TWO YEARS. Argentine Social Movements Strike Back Against Monsanto. Beekeeper Who Sounded Alarm on Colony Collapse Disorder Loses 90 Percent of His Hives.

Why we’ve been hugely underestimating the overfishing of the oceans. In North Dakota’s Booming Oil Patch, One Tribe Beat Back Fracking by Sarah van Gelder. The Arms Industry: Money, Manipulation, and Misery  How the Homeless Population Is Changing: It's Older and Sicker. Cancer and Climate Change. Drone Activist Captures the Truth About Factory Farming. Time to Get Real. There Aren’t Plenty of Fish in the Sea and It’s Our Fault. Humanity Has Entered a New and Scary Geological Era. Massive Leaks Are an Everyday Occurrence in Gas Fields. George Soros: Donald Trump is doing the work of Isis.

Meet the Indigenous Eco-feminists of the Amazon by Lindsey Weedston. Renewables can make the world richer and happier. Here's how. Crop Failure and Fading Food Supplies: Climate Change's Lasting Impact. Why climate change is a moral concern for the religious community. Journalist Reveals Tactics Brainwashing Industry Uses to Manipulate the Public. We Haven't Scratched the Surface of What Bernie Is Capable Of.

Wildlife Matters - Climate change – what Malaysia can do. Takepart. If we’re going to fix climate change, we’ll have to get creative. A Vast Ocean Inside the Earth: The Deep Unknown. The Next Food Fad Is Coming: Feed Your Microbiome. Lions are actually raised to be killed in South Africa. And American hunters love it.