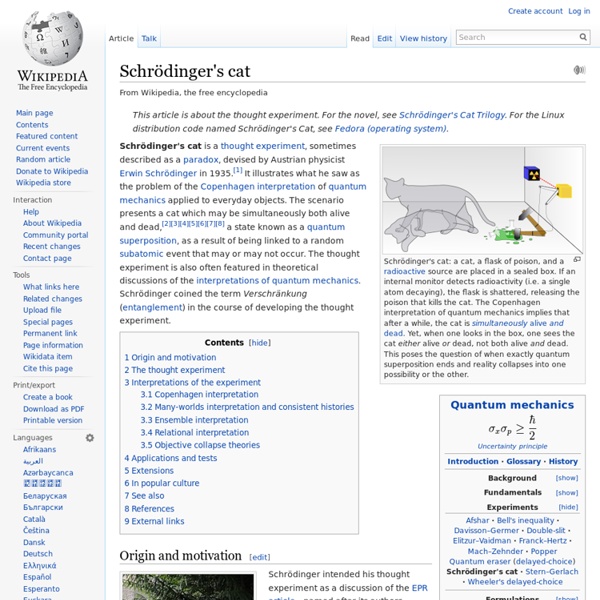 Schrödinger's cat: a cat, a flask of poison, and a radioactive source are placed in a sealed box. If an internal monitor detects radioactivity (i.e. a single atom decaying), the flask is shattered, releasing the poison that kills the cat. The Copenhagen interpretation of quantum mechanics implies that after a while, the cat is simultaneously alive and dead. Schrödinger's cat is a thought experiment, sometimes described as a paradox, devised by Austrian physicist Erwin Schrödinger in 1935.[1] It illustrates what he saw as the problem of the Copenhagen interpretation of quantum mechanics applied to everyday objects. Origin and motivation[edit] Real-size cat figure in the garden of Huttenstrasse 9, Zurich, where Erwin Schrödinger lived 1921 – 1926. The thought experiment[edit] Schrödinger wrote:[1][10] One can even set up quite ridiculous cases. You are the only contemporary physicist, besides Laue, who sees that one cannot get around the assumption of reality, if only one is honest. Related:  Cats

Maxwell's demon In the philosophy of thermal and statistical physics, Maxwell's demon is a thought experiment created by the physicist James Clerk Maxwell to "show that the Second Law of Thermodynamics has only a statistical certainty".[1] It demonstrates Maxwell's point by hypothetically describing how to violate the Second Law: a container of gas molecules at equilibrium is divided into two parts by an insulated wall, with a door that can be opened and closed by what came to be called "Maxwell's demon". The demon opens the door to allow only the faster than average molecules to flow through to a favored side of the chamber, and only the slower than average molecules to the other side, causing the favored side to gradually heat up while the other side cools down, thus decreasing entropy. Origin and history of the idea[edit] The thought experiment first appeared in a letter Maxwell wrote to Peter Guthrie Tait on 11 December 1867. Original thought experiment[edit] Schematic figure of Maxwell's demon [edit]

Crypt of Civilization Crypt of Civilization interior contents The Crypt of Civilization is a sealed airtight chamber located at Oglethorpe University in Brookhaven, Georgia, in Metro Atlanta. The crypt consists of preserved artifacts scheduled to be opened in the year AD 8113.[1][2] The 1990 Guinness Book of World Records cites the crypt as the "first successful attempt to bury a record of this culture for any future inhabitants or visitors to the planet Earth Beginnings[edit] Thornwell Jacobs (1877–1956), referred to as "the father of the modern time capsule", claims to be the first in modern times to conceive the idea of consciously preserving man-made objects for posterity by placing them in a sealed repository.[1][3][5][6][7] Jacobs's inspiration for the project was sparked by the Egyptian pyramid and tomb openings in the 1920s. Construction[edit] The room is 20 feet (6 m) long, 10 feet (3 m) high and 10 feet (3 m) wide. Artifacts[edit] Promotion[edit] After sealing[edit] See also[edit] References[edit]

Falling cat problem A falling cat modeled as two independently rotating parts turns around while maintaining zero net angular momentum The falling cat problem consists of explaining the underlying physics behind the common observation of the cat righting reflex: how a free-falling cat can turn itself right-side-up as it falls, no matter which way up it was initially, without violating the law of conservation of angular momentum. Although somewhat amusing, and trivial to pose, the solution of the problem is not as straightforward as its statement would suggest. The apparent contradiction with the law of conservation of angular momentum is resolved because the cat is not a rigid body, but instead is permitted to change its shape during the fall. The behavior of the cat is thus typical of the mechanics of deformable bodies. See also[edit] References[edit] Arabyan, A; Tsai, D. (1998), "A distributed control model for the air-righting reflex of a cat", Biol. Further reading[edit]

Thought experiment A thought experiment or Gedankenexperiment (from German) considers some hypothesis, theory,[1] or principle for the purpose of thinking through its consequences. Given the structure of the experiment, it may or may not be possible to actually perform it, and if it can be performed, there need be no intention of any kind to actually perform the experiment in question. The common goal of a thought experiment is to explore the potential consequences of the principle in question: "A thought experiment is a device with which one performs an intentional, structured process of intellectual deliberation in order to speculate, within a specifiable problem domain, about potential consequents (or antecedents) for a designated antecedent (or consequent)" (Yeates, 2004, p. 150). Overview[edit] Salviati. Although the extract does not convey the elegance and power of the 'demonstration' terribly well, it is clear that it is a 'thought' experiment, rather than a practical one. Variety[edit] Uses[edit]

Kowloon Walled City History[edit] Military outpost[edit] Lung Tsun Stone Bridge and Lung Tsun Pavilion (Pavilion for Greeting Officials) of Kowloon Walled City in 1898. The history of the Walled City can be traced back to the Song Dynasty (960–1279), when an outpost was set up to manage the trade of salt. 1915 map of the Hong Kong region with the Kowloon Walled City listed as "Chinese Town" at the upper right-hand corner. Though the British claimed ownership of the Walled City, they did little with it over the following few decades. Urban settlement[edit] Here, prostitutes installed themselves on one side of the street, while a priest preached and handed out powdered milk to the poor on the other; social workers gave guidance, while drug addicts squatted under the stairs getting high; what were children's games centres by day became strip show venues by night. —Leung Ping Kwan, City of Darkness, p. 120[3] After Japan's surrender, China announced its intent to reclaim its rights to the Walled City. Culture[edit]

Cat physics – and we are not making this up Cats may skulk, and cats may fall – but no matter what they do, cats must obey the laws of physics. Scientists have tried repeatedly to figure out how they manage to do it. At the extreme, physicists analysed what happens to a dropped cat. That's a cat in free-fall, a cat hurtling earthwards with nothing but kitty cunning to keep it from crashing. In 1969, TR Kane and MP Scher of Stanford University, in California, published a monograph called A Dynamical Explanation of the Falling Cat Phenomenon. It remains one of the few studies about cats ever published in the International Journal of Solids and Structures. "It is well known that falling cats usually land on their feet and, moreover, that they can manage to do so even if released from complete rest while upside-down … numerous attempts have been made to discover a relatively simple mechanical system whose motion, when proceeding in accordance with the laws of dynamics, possesses the salient features of the motion of the falling cat.

Khan Academy Rotterdam Blitz The Rotterdam Blitz was the aerial bombardment of Rotterdam by the Luftwaffe (German air force) on 14 May 1940, during the German invasion of the Netherlands in World War II. The objective was to support the German troops fighting in the city, break Dutch resistance and force the Dutch to surrender. Even though preceding negotiations resulted in a ceasefire, the bombardment took place nonetheless, in conditions which remain controversial, and destroyed almost the entire historic city centre, killing nearly nine hundred civilians and leaving 30,000 people homeless.[contradiction] The psychological and physical success of the raid, from the German perspective, led the Oberkommando der Luftwaffe (OKL) to threaten to destroy the city of Utrecht if the Dutch Government did not surrender. Prelude[edit] The Wehrmacht finally attacked the Netherlands in the early hours of 10 May 1940. Battle for Rotterdam[edit] On the Morning of 14 May, Hitler issued his "Weisung" Nr. 11. The bombing[edit]

Johann Hari: The myth of the panicking disaster victim - Johann Hari, Commentators The same predictions are made about every disaster – that once the lid of a tightly policed civilization is knocked off for a second, humans will become beasts. But the opposite is the case. It sounds grotesque to say we should see reasons for hope as we watch in real time while the earth is shaken six inches on its axis, tsunamis roar, and nuclear power stations teeter on meltdown. But it is true. The evidence gathered over centuries of disasters, natural and man-made, is overwhelming. On 18 April 1906, San Francisco was levelled by an earthquake. In San Francisco that week, the city's plumbers began – unpaid – to fix the broken pipes, one by one. They hated what had happened, but loved what they had become. This information is essential for knowing how to respond to disasters. In a disaster, very few people are on-yer-bike individualists grabbing for themselves, and they are regarded as incomprehensible by everybody else. This raises an obvious question.

Utrecht Utrecht (/ˈjuːtrɛkt/; Dutch pronunciation: [ˈytrɛxt] ( Utrecht is host to Utrecht University, the largest university of the Netherlands, as well as several other institutes for higher education. Due to its central position within the country, it is an important transport hub for both rail and road transport. History[edit] Origins (until 650)[edit] Many of the features in Blaeu's 1652 map of Utrecht can still be recognised in the city center In Roman times, the name of the Utrecht fortress was simply Traiectum denoting its location at a possibility to cross the Rhine. From the middle of the 3rd century Germanic tribes regularly invaded the Roman territories. Centre of Christianity in the Netherlands (650–1579)[edit] The Dom tower, with to the left behind it the remaining section of the Dom church. By the mid-7th century, English and Irish missionaries set out to convert the Frisians. Prince-Bishops[edit] Clerical buildings[edit] City of Utrecht[edit] The end of independence[edit] Geography[edit]

Largest genome on Earth | BioXplorer Which species has the largest genome? Humans? No… Ahhh, I remember the polyploidy was a process observed in higher plants. The flower has the unbelievable 149 billion base pairs, which is about 50 times the size of a human genome and makes it the owner of the largest genome ever found (till now!). Just for comparison, the smallest known genome of an eukaryote is that of a mammalian parasite known as Encephalitozoon intestinalis – 2.25 million base pairs. Besides the huge amount of information coded, to have the largest genome tend to be a liability – plants with lots of DNA have more trouble tolerating pollution and extreme climatic extinctions—and they grow more slowly than plants with less DNA, because it takes so long to replicate their genome. The largest genome study is revealed in a paper in the Botanical Journal of the Linnean Society.