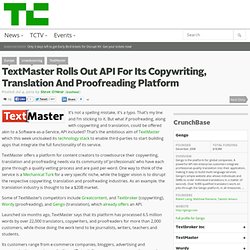 That’s my line and I’m sticking to it. But what if proofreading, along with copywriting and translation, could be offered akin to a Software-as-a-Service, API included? That’s the ambitious aim of TextMaster which this week uncloaked its technology stack to enable third-parties to start building apps that integrate the full functionality of its service. Mozilla & Knight Foundation Invest $1M In Crowdsourced Translation Startup Amara.

Let’s say you’re a video publisher who wants all the world to have access to your content… But translating videos into multiple languages is time-consuming and expensive — that is, unless you’ve got a team of volunteers to do it for you. 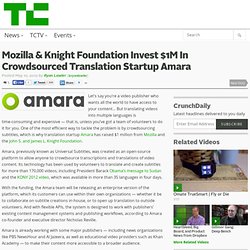 One of the most efficient way to tackle the problem is by crowdsourcing subtitles, which is why translation startup Amara has raised $1 million from Mozilla and the John S. and James L. Knight Foundation. Tolingo secures Series A funding for fast, cheap translation service. [Germany] Tolingo, the online translation platform, has secured a Series A round of investment. 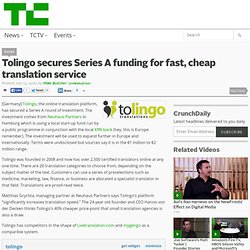 The investment comes from Neuhaus Partners in Hamburg which is using a local start-up fund run by a public programme in conjunction with the local KfW bank (hey, this is Europe remember). The investment will be used to expand further in Europe and internationally. Terms were undisclosed but sources say it is in the €1 million to €2 million range. Tolingo was founded in 2008 and now has over 2,500 certified translators online at any one time. There are 26 translation categories to choose from, depending on the subject matter of the text.

Matthias Grychta, managing partner at Neuhaus Partners says Tolingo’s platform “significantly increases translation speed.” Tolingo has competitors in the shape of Livetranslation.com and mygengo as a comparible system. By combining expert knowledge and innovative vision, tolingo have created a unique online system that marks a new era in translation. Babelverse To Offer Live Voice Translations For State Of The Union In Up To 7K Languages. Tonight, President Obama will give his 2012 State of the Union address before a joint session of Congress. 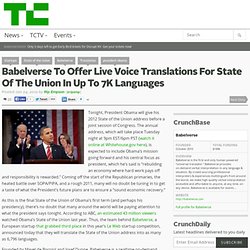 The annual address, which will take place Tuesday night at 9pm EST/6pm PST (watch it online at Whitehouse.gov here), is expected to include Obama’s mission going forward and his central focus as president, which he’s said is “rebuilding an economy where hard work pays off and responsibility is rewarded.” Coming off the start of the Republican primaries, the heated battle over SOPA/PIPA, and a rough 2011, many will no doubt be tuning in to get a taste of what the President’s future plans are to ensure a “sound economic recovery.”

As this is the final State of the Union of Obama’s first term (and perhaps his presidency), there’s no doubt that many around the world will be paying attention to what the president says tonight. According to ABC, an estimated 43 million viewers watched Obama’s State of the Union last year. Excerpt image credit White House (Pete Souza) MyGengo's New API Lets You Plug Human Translation Into Websites And Apps. Translating a website isn’t an easy task, especially if you have limited internal resources, a complex site structure, or multiple languages to deal with. 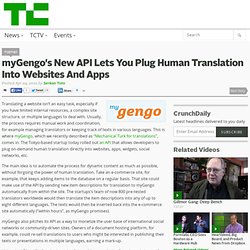 Usually, the process requires manual work and coordination, for example managing translators or keeping track of texts in various languages. This is where myGengo, which we recently described as “Mechanical Turk for translations”, comes in. The Tokyo-based startup today rolled out an API that allows developers to plug on-demand human translation directly into websites, apps, widgets, social networks, etc. The main idea is to automate the process for dynamic content as much as possible, without forgoing the power of human translation. Take an e-commerce site, for example, that keeps adding items to the database on a regular basis. MyGengo also pitches its API as a way to monetize the user base of international social networks or community-driven sites. Gengo - Translation Service. OneSky: Translation made easy. Expert Translation at Unbeatable Prices.

9 Website Translation Crowdsourcing Services. As much as we like to think that English is a fairly universal language on the Internet, that’s simply not the case. 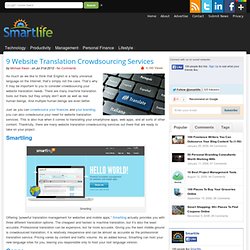