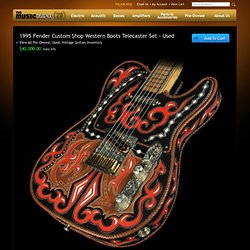 When you get something that grabs the attention of the entire staff and has them ogling like kids in a toy store - you know you've got something special on your hands. This is the Fender Custom Shop Western Boots Set Telecaster, only one out of two matching sets of guitar and boots built by Alan Hamel, and displayed at the 1995 NAMM convention. The guitar was previously owned by Robert Galassi of Ossining Music in Ossining, New York and has been kept in absolutely pristine, mint collectors condition over the years.

Guitars [1] Guitars [2] View topic - The Everly Brothers and their Gibsons... Glenn: If I could amend your post and add a detail or two.... 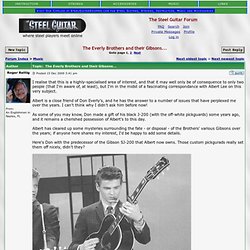 When they first came to Nashville (their father arranged a meeting with his old friend, Chet Atkins) Don was playing a Gibson Southern Jumbo (SJ). In fact, as I said earlier, this was used on their first two or three hit records, even though they had acquired a pair of standard sunburst J-200s for stage appearances. These J-200s can be seen on the cover of their first LP ('They're Off And Rolling'); the sleeve-picture shows them astride Harley-Davidsons with the guitars slung on their backs. Next they got a pair of black J-200s with black laminate 'guards (see my pic in an earlier post). Next they had their most famous J-200s, the black ones with big white double-guards.

Then - a fourth pair of J-200s; these were a grayish colour with big black 'guards (see the LP 'Instant Party' - they also used them on Ed Sullivan's TV Show when they appeared in their Marine uniforms). In the Martin... -Pictures: Guitars That Rock. Stage coach robbery leather covered tele: - Gretsch Guitar Discussion Forum. Quote: Ya the sides will be done as well...I am still coming up with the artwork for those..it will be 9 sections, bullets,art work,bullets artwork...and so on. 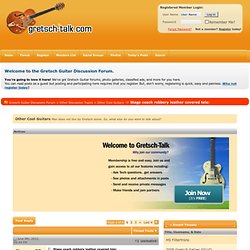 Doing this will not effect the sound, the bridge is mounted directly to the wood, and the strings go through the body. And we will be putting Joe Bardens in it along with Switchcraft parts and whatever else magical he does. I say we...because I am working with Scott Morgan building this guitar, I am doing all the leather and he is assembling and doing the set up and the dial in of the guitar. I am designing a Charlie Christian style pick up cover for the Neck pup so in the future a tech can easily get in there and do whatever they have to do since the front of the guitar including the pick guard are 1 piece of leather.

Leather Telecaster: Guitar. March 2009. The following is an article written by Glynn from the Generally Electric guitar blog, and concerns an unassuming-looking but highly desirable guitar from the genius that was Leo Fender: G&L was founded by George Fullerton and a certain Leo Fender in the late 1970s following the deterioration of Fender’s relationship with Musicman, and the SC-2 was one of G&L’s earliest production guitars. 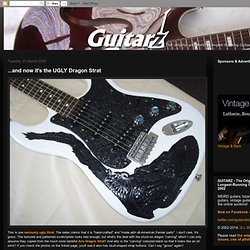 They’re perhaps best known as Bob Mothersbaugh of Devo’s guitar of choice but, for me, inspiration came from early Helmet and Band Of Susans records. The latter even used SC-1s, customised with pick-guards, in their album photography and on posters, apparently catching the attention of Leo Fender himself. Nevertheless they remain a relatively obscure guitar. Nonetheless, there's nothing budget about the construction, specification or tone of these guitars.