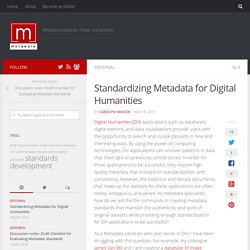 By using the power of computing technologies, DH applications can uncover patterns in data that shed light on previously untold stories. In order for these applications to be successful, they require high quality metadata that is based on standardization and consistency. However, the historical and literary documents that make up the datasets for these applications are often messy, ambiguous, and varied. As metadata specialists, how do we aid the DH community in creating metadata standards that maintain the authenticity and spirit of original datasets while providing enough standardization for DH applications to be successful?

As a Metadata Librarian who also works in DH, I have been struggling with this question. Librarians are also largely silent on these issues in the context of DH. MESAlliance sur Twitter : ""Preserve your assets if you want to repurpose them" #MetadataMadness #mesameme #archives photo: @caragarcia_com. BHL sur Twitter : "Help us tag @Flickr images to enhance our #metadata & support image searching in BHL! We need your Help to Tag over a Million Biodiversity Images in Flickr. Two Ways to Access BHL Images in Flickr Images from the books and journals of the Biodiversity Heritage Library (BHL) are now more readily available in Flickr than ever before. 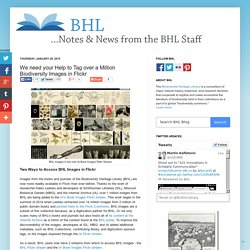 Thanks to the work of researcher Kalev Leetaru and developers at Smithsonian Libraries (SIL), Missouri Botanical Garden (MBG), and the Internet Archive (IA), over 1 million images from BHL are being added to the IA's Book Images Flickr stream. This work began in the summer of 2014 when Leetaru extracted over 14 million images from 2 million IA public domain books and pushed them to the Flickr Commons. BHL images are a subset of this collection because, as a digitization partner for BHL, IA not only scans many of BHL’s books and journals but also hosts all of its content at the Internet Archive as a mirror of the content found at the BHL portal.

As a result, BHL users now have 2 streams from which to access BHL images - the BHL Flickr stream and the IA Book Images Flickr stream. Why Are We Waiting for the ILS to Change? A few days ago, while catching up with list traffic on RDA-L, I stumbled on a conversation between two librarians that got me thinking. 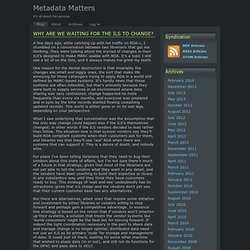 They were talking about the myriad of changes in their ILS’s designed to make MARC usable with RDA. It’s a topic I still see a lot of on the lists, and it always makes me grind my teeth. One reason for the dental destruction is that invariably the changes are small and niggly ones, the sort that make life annoying for those catalogers trying to apply RDA in a world still defined by MARC-based systems. It’s hardly news that those systems are often inflexible, but that’s primarily because they were built to supply services in an environment where data sharing was very centralized, change happened no more frequently than every six months, and everyone was prepared and in sync by the time records started flowing containing updated records.

This world is either gone or on its last legs, depending on your perspective. Reference Resource: “Newspaper Metadata Manual” From University of North Texas Libraries. Www.niso.org/publications/press/UnderstandingMetadata.pdf. RDA Vocabularies: Process, Outcome, Use. D-Lib Magazine January/February 2010 Volume 16, Number 1/2Table of Contents RDA Vocabularies: Process, Outcome, Use Printer-friendly Version Abstract The Resource Description and Access (RDA) standard, due to be released this coming summer, has included since May 2007 a parallel effort to build Semantic Web enabled vocabularies. 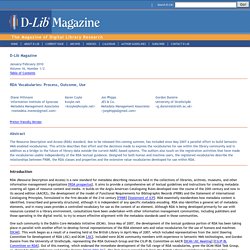 Introduction RDA (Resource Description and Access) is a new standard for metadata describing resources held in the collections of libraries, archives, museums, and other information management organizations [RDA prospectus]. One such community is the Dublin Core Metadata Initiative (DCMI). A Grammar of Dublin Core. "We begin with the sentence, because the sentence is the unit of discourse, because words can be classified only from their function in the sentence, and because the pupil should, from the outset, see that what determines the words in the sentence and the sentence itself is the thought. 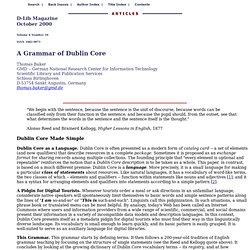 "Alonso Reed and Brainerd Kellogg, Higher Lessons in English, 1877 Dublin Core Made Simple Dublin Core as a Language. Dublin Core is often presented as a modern form of catalog card -- a set of elements (and now qualifiers) that describe resources in a complete package. Sometimes it is proposed as an exchange format for sharing records among multiple collections. A Pidgin for Digital Tourists. This Grammar. Infographic: Anatomy of a Librarian. Linked Data, Rdf & Sparql. Google Image Result for. The Semantic Web, Linked Data and Drupal, Part 2: Combine linked datasets with Drupal 7 and SPARQL Views. Introduction Part 1 of this series, "The Semantic Web, Linked Data and Drupal, Part 1: Expose your data using RDF," covered some of the new features incorporated in Drupal 7. 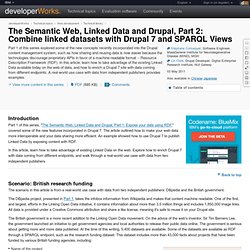 The article outlined how to make your web data more interoperable and your data sharing more efficient. An example showed how to use Drupal 7 to publish Linked Data by exposing content with RDF. In this article, learn how to take advantage of existing Linked Data on the web. DC-dot. Linked Data for Libraries. Linked Data and bibliographic metadata models © PhOtOnQuAnTiQuE Some time after I wrote “UMR – Unified Metadata Resources“, I came across Chris Keene’s post “Linked data & RDF : draft notes for comment“, “just a list of links and notes” about Linked Data, RDF and the Semantic Web, put together to start collecting information about “a topic that will greatly impact on the Library / Information management world“. 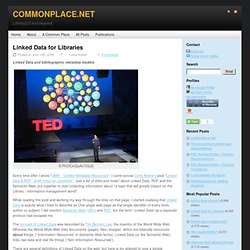 While reading this post and working my way through the links on that page, I started realising that Linked Data is exactly what I tried to describe as One single web page as the single identifier of every book, author or subject. I did mention Semantic Web, URI’s and RDF, but the term “Linked Data” as a separate protocol had escaped me. The concept of Linked Data was described by Tim Berners Lee, the inventor of the World Wide Web. I will try to illustrate the different aspects using some examples from the library world. Dublin Core and the Cataloguing Rules: Dublin Core Metadata template.

11 Things To Know About Semantic Web. 1. 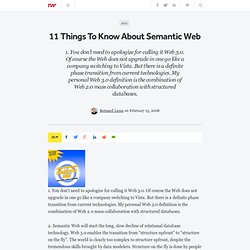 You don’t need to apologize for calling it Web 3.0. Of course the Web does not upgrade in one go like a company switching to Vista. But there is a definite phase transition from current technologies. My personal Web 3.0 definition is the combination of Web 2.0 mass collaboration with structured databases. 2. 3. 4. 5. 6. 7. 8. 9. Library Linked Data. Karen Coyle's home page. The FRBR Blog. Special Issue: 21st Century Metadata Operations: Challenges, Opportunities, Directions.

Submitted by Daniel A. 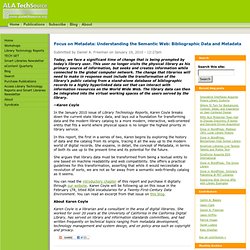 Freeman on January 19, 2010 - 12:27pm Today, we face a significant time of change that is being prompted by today’s library user. This user no longer visits the physical library as his primary source of information, but seeks and creates information while connected to the global computer network. Understanding the Semantic Web: Bibliographic Data and Metadata. Semantic Web, Cataloging, & Metadata. Semantic Web. The Semantic Web is a collaborative movement led by international standards body the World Wide Web Consortium (W3C).[1] The standard promotes common data formats on the World Wide Web. 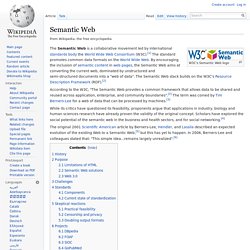 By encouraging the inclusion of semantic content in web pages, the Semantic Web aims at converting the current web, dominated by unstructured and semi-structured documents into a "web of data". The Semantic Web stack builds on the W3C's Resource Description Framework (RDF).[2] According to the W3C, "The Semantic Web provides a common framework that allows data to be shared and reused across application, enterprise, and community boundaries".[2] The term was coined by Tim Berners-Lee for a web of data that can be processed by machines.[3] While its critics have questioned its feasibility, proponents argue that applications in industry, biology and human sciences research have already proven the validity of the original concept.

History[edit] Purpose[edit] Limitations of HTML[edit] C Semantic Web Activity. The Semantic Web is a web of data. There is lots of data we all use every day, and it is not part of the web. I can see my bank statements on the web, and my photographs, and I can see my appointments in a calendar. Semantic Web. I have an idea that I think is very important but I haven’t yet polished to the point where I’m comfortable sharing it. I’m going to share it anyway, unpolished, because I think it’s that useful. So here I am, handing you a dull, gray stone, and I’m saying there’s a diamond inside. Www.catalogingfutures.com/catalogingfutures/2010/04/changes-from-aacr2-to-rda-a-comparison-of-examples.html.