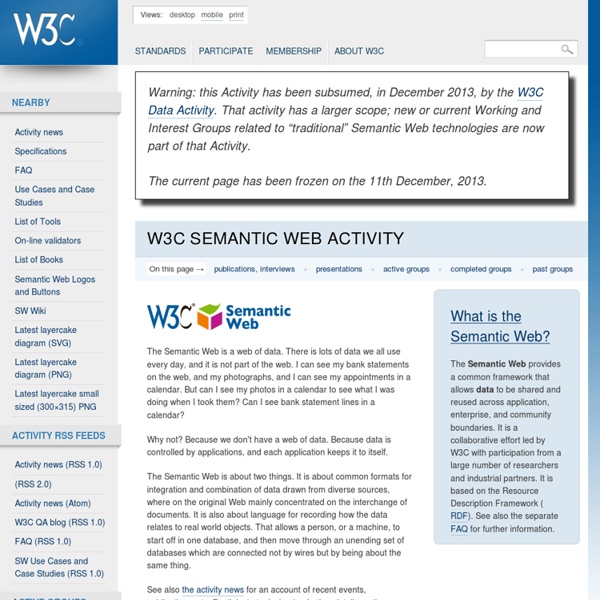 30 Really Useful HTML5 Tutorials Almost everybody is talking about latest enhancement in web industry. Yes, it’s HTML5 and CSS3. Really these languages expanded the possibilities of web design. There are lots of web designer s and developers who have started using HTML5 into their designs. Here we’ve rounded up 30 really useful HTML5 tutorials that will definitely help developers to increase their skills. You may also like our previous HTML5 related articles:

OntologWiki: Ontology Summit 2012 Ontology Summit 2012: Ontology for Big Systems (2Y6C) This Summit is , and is the 7th in the series of 3-month open annual events, by and for the Ontology Community and their collaborators. (2Y6D) see: , our , and (2Y6E) Pipes - Module Reference The modules in the Pipes Editor have been grouped into categories based on their functionality. To learn more about the modules, and to see them used in example Pipes, click on the categories below: Sources Most Pipes begin with a data source. These modules grab data from somewhere on the internet and bring it into your Pipe for processing. User Inputs These modules let you define parameters for your Pipe. These inputs can be fed into other modules in your Pipe. W3C Data Activity - Building the Web of Data Data is increasingly important to society and W3C has a mature suite of Web standards with plans for further work on making it easier for average developers to work with graph data and knowledge graphs. Linked Data is about the use of URIs as names for things, the ability to dereference these URIs to get further information and to include links to other data. There are ever increasing sources of Linked Open Data on the Web, as well as data services that are restricted to the suppliers and consumers of those services. The digital transformation of industry is seeking to exploit advanced digital technologies. This will facilitate businesses to integrate horizontally along the supply and value chains, and vertically from the factory floor to the office floor. W3C is seeking to make it easier to support enterprise wide data management and governance, reflecting the strategic importance of data to modern businesses.

XFN - XHTML Friends Network XFN™ (XHTML Friends Network) is a simple way to represent human relationships using hyperlinks. In recent years, blogs and W3C Data Activity As many people who work in the field will know, the 2007 INSPIRE Directive tasks European Union Member States with harmonizing their spatial and environmental data. The relevant department of the European Commission, the JRC, has lead the definition of a complex data model that is broken down into various themes. Naturally enough, the data is modeled in UML and the implementations are based largely on OGC standards that make use of XML/GML etc. However, a number of projects are experimenting with using the model in Linked Data environments. These include GeoKnow, MELODIES and SmartOpenData (SmOD) in which W3C’s European host, ERCIM, is a partner.

Alex Faaborg - &raquo; Microformats - Part 0: Introduction Have you been over hearing people talk about microformats and thought to yourself “what are those?” In this post I provide a quick introduction, and discuss the various ways that microformats are changing the Web. What are microformats? Microformats can be explained in a number of ways, but the easiest way to explain them is to just show an example. SKOS Simple Knowledge Organization System - home page SKOS is an area of work developing specifications and standards to support the use of knowledge organization systems (KOS) such as thesauri, classification schemes, subject heading lists and taxonomies within the framework of the Semantic Web ... [read more] Alignment between SKOS and new ISO 25964 thesaurus standard (2012-12-13) ISO 25964-1, published in 2011, replaced the previous thesaurus standards ISO 2788 and ISO 5964 (both now withdrawn).

Labs/Ubiquity Back to Labs. Ubiquity was a Mozilla Labs experiment that was in development from 2008 to 2009. Its purpose was to explore whether a radically different type of interface to the Web — a task-centric, natural-language-based command line — could help us get common Web tasks done faster. Development is currently on indefinite hiatus. We will most likely revisit the experiment at some point in the future.