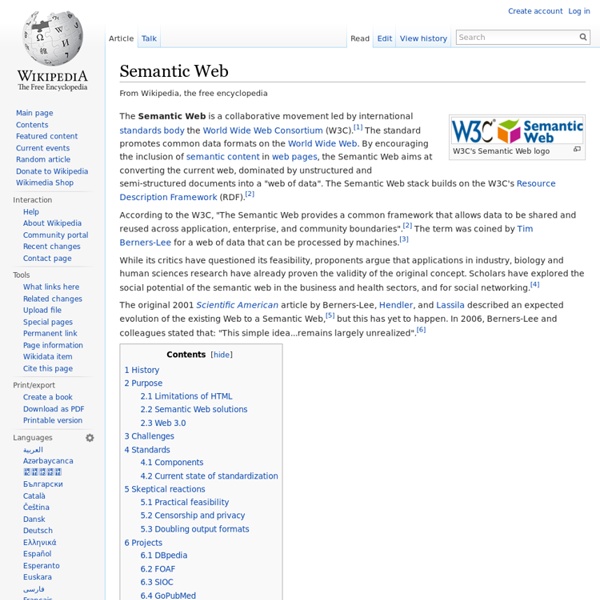 The Semantic Web is a collaborative movement led by international standards body the World Wide Web Consortium (W3C).[1] The standard promotes common data formats on the World Wide Web. By encouraging the inclusion of semantic content in web pages, the Semantic Web aims at converting the current web, dominated by unstructured and semi-structured documents into a "web of data". The Semantic Web stack builds on the W3C's Resource Description Framework (RDF).[2] According to the W3C, "The Semantic Web provides a common framework that allows data to be shared and reused across application, enterprise, and community boundaries".[2] The term was coined by Tim Berners-Lee for a web of data that can be processed by machines.[3] While its critics have questioned its feasibility, proponents argue that applications in industry, biology and human sciences research have already proven the validity of the original concept. History[edit] Purpose[edit] Limitations of HTML[edit] Semantic Web solutions[edit]

C Semantic Web Activity The Semantic Web is a web of data. There is lots of data we all use every day, and it is not part of the web. I can see my bank statements on the web, and my photographs, and I can see my appointments in a calendar. But can I see my photos in a calendar to see what I was doing when I took them? Can I see bank statement lines in a calendar? Visualizing the contents of social bookmarking systems I’ve decided to post a few visualizations I’ve made some time ago as part of my PhD work. The method has been published, but more as a sidenote [1]; also, I’ve since applied it to additional datasets, so I thought it might be interesting to share those images. In my PhD thesis, I try to make sense of the large bodies of data that are accumulated by people saving resources online, tagging them with whatever words they choose in order to find them later on. Each time a user u saves a document d, using the tags t1, t2, and t3, three triples (d,u,t1), (d,u,t2), (d,u,t3) are created. In this way, the users of large social bookmarking sites like Delicious have created datasets of several hundreds of millions of triples. Over the last years, a whole body of literature has been created that’s concerned with making sense of this data (there’s an intuition that something valuable is in there; after all, each of these millions of triples means that somebody has thought *something*!).

Beyond Social: Read/Write in The Era of Internet of Things This blog was founded in 2003 on the philosophy of a read/write Web - a Web in which people can create content as easily as they consume it. This trend eventually came to be known as Web 2.0 - although others preferred Social Web - and was popularized by activities like blogging and social networking. It would be easy to say that the 'social' element is still the primary part of today's Web, since the popular products of this era enable you to say what's on your mind (Facebook), what's happening (Twitter), or where you are (Foursquare). All of these are mostly social activities. But more significantly, these and other products output data that will increasingly be used to build personalized services for you. Linked data An introductory overview of Linked Open Data in the context of cultural institutions. In computing, linked data (often capitalized as Linked Data) describes a method of publishing structured data so that it can be interlinked and become more useful. It builds upon standard Web technologies such as HTTP, RDF and URIs, but rather than using them to serve web pages for human readers, it extends them to share information in a way that can be read automatically by computers. This enables data from different sources to be connected and queried.[1] Tim Berners-Lee, director of the World Wide Web Consortium, coined the term in a design note discussing issues around the Semantic Web project.[2] Principles[edit]

MusicBrainz MusicBrainz captures information about artists, their recorded works, and the relationships between them. Recorded works entries capture at a minimum the album title, track titles, and the length of each track. These entries are maintained by volunteer editors who follow community written style guidelines. Recorded works can additionally store information about the release date and country, the CD ID, cover art, acoustic fingerprint, free-form annotation text and other metadata. Semantic Web I have an idea that I think is very important but I haven’t yet polished to the point where I’m comfortable sharing it. I’m going to share it anyway, unpolished, because I think it’s that useful. So here I am, handing you a dull, gray stone, and I’m saying there’s a diamond inside. Maybe even a dilithium crystal.

Tag (metadata) Tagging was popularized by websites associated with Web 2.0 and is an important feature of many Web 2.0 services. It is now also part of some desktop software. A Description of the Equator and Some Otherlands, collaborative hypercinema portal, produced by documenta X, 1997. User upload page associating user contributed media with the term Tag. Online and Internet databases and early websites deployed them as a way for publishers to help users find content.

Metadata Metadata is "data about data".[1] There are two "metadata types;" structural metadata, about the design and specification of data structures or "data about the containers of data"; and descriptive metadata about individual instances of application data or the data content. The main purpose of metadata is to facilitate in the discovery of relevant information, more often classified as resource discovery. Metadata also helps organize electronic resources, provide digital identification, and helps support archiving and preservation of the resource. Metadata assists in resource discovery by "allowing resources to be found by relevant criteria, identifying resources, bringing similar resources together, distinguishing dissimilar resources, and giving location information." [2] Definition[edit] Metadata (metacontent) is defined as the data providing information about one or more aspects of the data, such as:

Linked Data What is Linked Data? The Semantic Web is a Web of Data — of dates and titles and part numbers and chemical properties and any other data one might conceive of. The collection of Semantic Web technologies (RDF, OWL, SKOS, SPARQL, etc.) provides an environment where application can query that data, draw inferences using vocabularies, etc. However, to make the Web of Data a reality, it is important to have the huge amount of data on the Web available in a standard format, reachable and manageable by Semantic Web tools. Furthermore, not only does the Semantic Web need access to data, but relationships among data should be made available, too, to create a Web of Data (as opposed to a sheer collection of datasets). This collection of interrelated datasets on the Web can also be referred to as Linked Data.

Music This article is about music as a form of art. For history see articles for History of music and Music history. The creation, performance, significance, and even the definition of music vary according to culture and social context. Music ranges from strictly organized compositions (and their recreation in performance), through improvisational music to aleatoric forms. Music can be divided into genres and subgenres, although the dividing lines and relationships between music genres are often subtle, sometimes open to personal interpretation, and occasionally controversial.