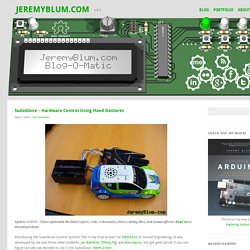 Read on to download them. Introducing the SudoGlove Control System! This is my final project for INFO4320 at Cornell Engineering. It was developed by me and three other students: Joe Ballerini, Tiffany Ng, and Alex Garcia. You get geek points if you can figure out why we decided to call it the SudoGlove. SudoGlove aims to bridge the gap between the user and traditional physical hardware devices.

As an investigation into this idea, the goal of this project is to capture simple hand gestures from the SudoGlove and use that input to wirelessly control a modified RC car. News: SudoGlove has been featured on Hack-a-Day! Read on for a demonstration video, photo gallery, additional information, and downloadable content! We’re crazy engineers and there’s no telling what we may do next!

Let's Make Robots! PipeBot: Easy to make smartphone controlled toy robot! From our STAR Maker : Muhammed Azhar The thought of making a toy robot must have crossed the minds of many children and the child in many adults. 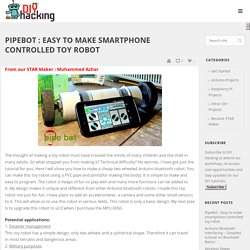 So what stopped you from making it? Technical difficulty? No worries. Complete Motor guide for Robotics - All. Super Easy to Build 1Sheeld 2 Wheel Drive Robot. In this article we will make a two wheeled robot using Arduino, Adafruit motor shield v1 and 1Sheeld uses Bluetooth as its communication channel. 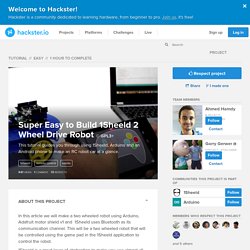 This will be a two wheeled robot that will be controlled using the game pad in the 1Sheeld application to control the robot. 1Sheeld is a great layer of abstraction to make you use almost all the sensors in your mobile phone to interface with the Arduino. The code will be so simple as we’ll use the Adafruit library to help us more in reducing our code and circuit wiring using Adafruit shield. We’ll begin by listing the components then we’ll start off. Arduino Bluetooth Controled RC Car - All. Bluetooth RC car. Putting the new control circuit together is relatively easy. 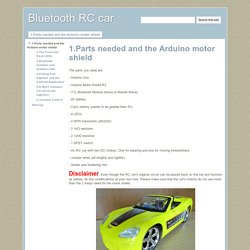 The Arduino Motor Shield is made to be stacked on top of the Arduino Uno, as seen in the picture bellow. This allows you to use most of the pins on the Arduino Uno, except for the ones used to control the two motors. This pins are clearly identified on the Motor Shield. The picture bellow shows these pins, and what they are used for. Simple RC car for beginners (Android control over Bluetooth) Arduino - RC Car Hacked together tutorial. RC Hobby Controllers and Arduino. RC Hobby Controllers and Arduino Skill Level: Intermediate by NPoole | May 22, 2012 | 39 comments Remote Control Arduino Robots, cars, robotcars, and all sorts of prank devices require some degree of remote control. 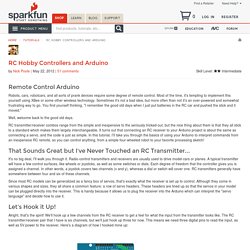 Most of the time, it's tempting to implement this yourself using XBee or some other wireless technology. Well, welcome back to the good old days. RC transmitter/receiver combos range from the simple and inexpensive to the seriously tricked-out, but the nice thing about them is that they all stick to a standard which makes them largely interchangeable. That Sounds Great but I've Never Touched an RC Transmitter... It's no big deal, I'll walk you through it. Since most RC models can be generalized as a fancy box of servos, that's exactly what the receiver is set up to control.

Let's Hook it Up! Alright, that's the spirit! Notice that the RC receiver is upside-down, I flipped it to make it easier to trace my wires. Now let's upload a sketch and see what's coming in on those pins. Bluetooth Controlled Arduino RC Car. This Project is something i started for my Microcontroller class. 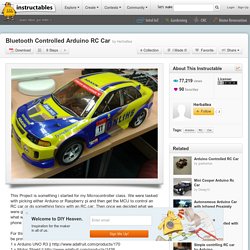 Cheap 2-Way Bluetooth Connection Between Arduino and PC. In the guide, I will explain how I managed to send data back and forth between a PC and Arduino via a cheap Bluetooth HC-05 transceiver, which can be found for less than $10 on ebay with the breakout board. 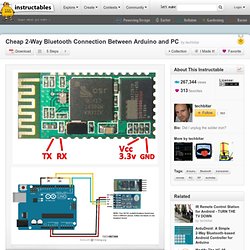 The version I have used in this project does not have a breakout board so it's little cheaper but more difficult to solder. I strongly recommend buying the module with the breakout board. This Bluetooth transceiver basically acts as a generic serial COM port. The PC to Arduino Bluetooth serial connection can be useful in many applications such as controlling servos, motors, and writing to LCDs. ArduDroid: A Simple 2-Way Bluetooth-based Android Controller for Arduino. Nov 19. 2031: OPINION: The Amazing Synergy Between Arduino & Android. 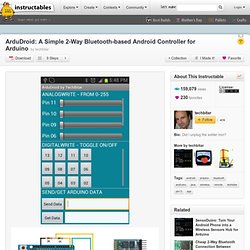 ArduDroid (formerly Andruino) is a simple tool to help you control your Arduino (or clone) from your Android phone. INSTALL FROM GOOGLE PLAY.