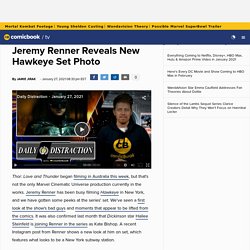 Jeremy Renner has been busy filming Hawkeye in New York, and we have gotten some peeks at the series' set. We've seen a first look at the show's bad guys and moments that appear to be lifted from the comics. It was also confirmed last month that Dickinson star Hailee Steinfeld is joining Renner in the series as Kate Bishop. A recent Instagram post from Renner shows a new look at him on set, which features what looks to be a New York subway station. In his Instagram Stories, Renner is seen sitting in a Hawkeye chair in a subway station. "It's amazing, my God, to finally be able to confirm. Hawkeye Set Photo Straight Out of Fraction and Aja's Acclaimed Marvel Comic. With the inclusion of Kate Bishop (Hailee Steinfeld) and Lucky the Pizza Dog in Hawkeye, it doesn't take much effort to recognize the Disney+ show will draw heavily from the comics run of the same name from Matt Fraction and David Aja. 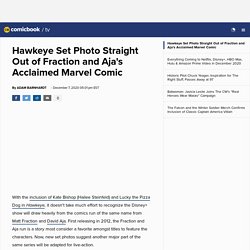 First releasing in 2012, the Fraction and Aja run is a story most consider a favorite amongst titles to feature the characters. Now, new set photos suggest another major part of the same series will be adapted for live-action. New set photos obtained by the team at Murphy's Multiverse show the production using a 1970 Buick Gran Sport. According to the scoopers, the photographer that obtained the picture overheard Hawkeye crew members discussing how they had hoped to acquire a 1970 Dodge Challenger to make things entirely comic-accurate, though the stars weren't able to align. It is, you are right, as it starts in Jersey (where Cherry lived, Clint lived in Brooklyn, tho). Hawkeye: Who the Heck Is Playing Kate Bishop? Last week, Jeremy Renner shared a timelapse video of himself getting his face turned into a mold, leading most to believe the casting will lead to an iconic mask the actor will be donning when Hawkeye debuts on Disney+. 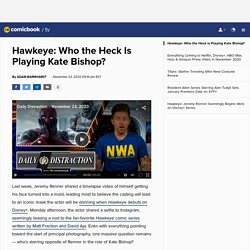 Monday afternoon, the actor shared a selfie to Instagram, seemingly teasing a nod to the fan-favorite Hawkeye comic series written by Matt Fraction and David Aja. Even with everything pointing toward the start of principal photography, one massive question remains — who's starring opposite of Renner in the role of Kate Bishop? To date, we have yet to get confirmation of the actor that'll be slotted in the role of the beloved comics character, and it's been a major point of discussion of fans from all corners of the Marvel Cinematic Universe. Hawkeye Rumor Says Clint Barton Will Lose His Hearing in Disney+ Show. Jeremy Renner's Hawkeye Marvel Series to Feature Villain Madame Masque (Exclu... Disney+ will serve as an avenue for fleshing out several MCU characters, and Jeremy Renner's Clint Barton will clearly benefit from the year-old streaming service. 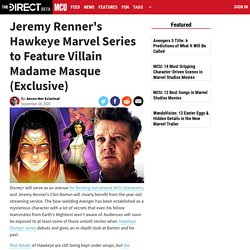 The bow-wielding Avenger has been established as a mysterious character with a lot of secrets that even his fellow teammates from Earth's Mightiest aren't aware of. Audiences will soon be exposed to at least some of those untold stories when Hawkeye Disney+ series debuts and gives an in-depth look at Barton and his past. Hawkeye Reportedly Casts Hailee Steinfeld as Kate Bishop. Marvel has apparently found its Kate Bishop. 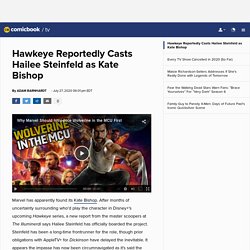 After months of uncertainty surrounding who'd play the character in Disney+'s upcoming Hawkeye series, a new report from the master scoopers at The Illuminerdi says Hailee Steinfeld has officially boarded the project. Steinfeld has been a long-time frontrunner for the role, though prior obligations with AppleTV+ for Dickinson have delayed the inevitable. Official Teaser Trailer. Marvel's Hawkeye: Hailee Steinfeld Responds to Rumors She's Joining the MCU. Spider-Man: Into the Spider-Verse star and singer-songwriter Hailee Steinfeld says she's focused on music amid rumors she's taking aim at playing Kate Bishop, the eagle-eyed protégé of retired Avenger Clint Barton (Jeremy Renner), in Marvel Studios' Hawkeye series on Disney+. 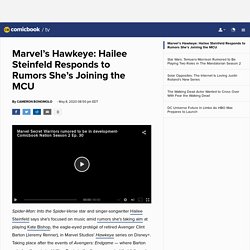 Taking place after the events of Avengers: Endgame — where Barton acted as the criminal-killing Ronin in the five-year period that followed his family being snapped out of existence by Thanos (Josh Brolin) — Hawkeye sees Barton pass the mantle to his successor, Bishop, who in the Marvel Comics belonged to the original roster of teen superheroes known as the Young Avengers. Appearing on SiriusXM's Morning Mash Up, Steinfeld feigned connectivity issues when asked if she's joining the Marvel Cinematic Universe. More seriously, Steinfeld answered, "You know, right now, I will tell you that music is where my head is at. Disney TV Studios Stops Production on All Pilots Due to Coronavirus Pandemic. As ongoing concerns regarding the outbreak of COVID-19 continue to grow in the entertainment industry, Disney Television Studios has made the decision to cease production on every pilot in production for the time being. 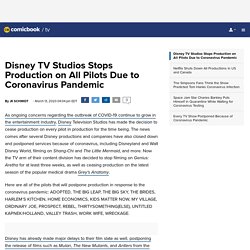 The news comes after several Disney productions and companies have also closed down and postponed services because of coronavirus, including Disneyland and Walt Disney World, filming on Shang-Chi and The Little Mermaid, and more. Now the TV arm of their content division has decided to stop filming on Genius: Aretha for at least three weeks, as well as ceasing production on the latest season of the popular medical drama Grey's Anatomy. Here are all of the pilots that will postpone production in response to the coronavirus pandemic: ADOPTED, THE BIG LEAP, THE BIG SKY, THE BRIDES, HARLEM’S KITCHEN, HOME ECONOMICS, KIDS MATTER NOW, MY VILLAGE, ORDINARY JOE, PROSPECT, REBEL, THIRTYSOMETHING(ELSE), UNTITLED KAPNEK/HOLLAND, VALLEY TRASH, WORK WIFE, WRECKAGE. Hawkeye Star Jeremy Renner Begins Work on New Disney+ Series. There have been questions about the future of the Marvel Cinematic Universe and the upcoming series planned for Disney+, especially after numerous delays to the production of Hawkeye and reported problems with casting the actress set to play Kate Bishop on the new series. 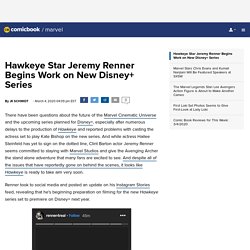 And while actress Hailee Steinfeld has yet to sign on the dotted line, Clint Barton actor Jeremy Renner seems committed to staying with Marvel Studios and give the Avenging Archer the stand alone adventure that many fans are excited to see. And despite all of the issues that have reportedly gone on behind the scenes, it looks like Hawkeye is ready to take aim very soon. Renner took to social media and posted an update on his Instagram Stories feed, revealing that he's beginning preparation on filming for the new Hawkeye series set to premiere on Disney+ next year. "It was in early development in terms of discussing what the project would be and I was very interested in that character, which is why that was the answer.

March 4 2020. HAWKEYE Will Reportedly Feature Appearances From Both Trickshot And The Track... Despite claims that Hawkeye has been delayed, work on Marvel's Disney+ TV series continues and it's still expected to come our way in 2021. 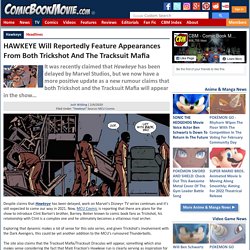 Now, MCU Cosmic is reporting that there are plans for the show to introduce Clint Barton's brother, Barney. Better known to comic book fans as Trickshot, his relationship with Clint is a complex one and he ultimately becomes a villainous rival archer. Exploring that dynamic makes a lot of sense for this solo series, and given Trickshot's involvement with the Dark Avengers, this could be yet another addition to the MCU's rumoured Thunderbolts.

The official #Hawkeye title sequence has been revealed on @disneyplus:… Disney Denies Hawkeye Series Delay. Hawkeye may live on after all! 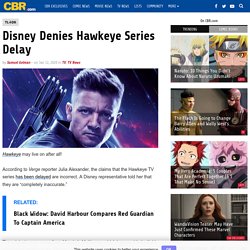 According to Verge reporter Julia Alexander, the claims that the Hawkeye TV series has been delayed are incorrect. A Disney representative told her that they are “completely inaccurate.” RELATED: Black Widow: David Harbour Compares Red Guardian to Captain America. Adrianne Palicki Offers to Replace Hawkeye With Mockingbird Series. The Disney+ Hawkeye series may be on indefinite hold, and Agents of S.H.I.E.L.D.'s Adrianne Palicki has an idea for a replacement show should the rumors turn out to be true. Palicki reposted an article by Discussing Film about the rumored delay, followed by a gif of herself as Mockingbird from Agents of S.H.I.E.L.D. "If you need something to takes its place, I might have an idea.

(You have my number, @Marvel.) ," she wrote. RELATED: Bucky and Zemo Hit the Streets in New Falcon and Winter Soldier Photos. Disney+'s Hawkeye Rumored To Be Indefinitely Delayed. Marvel Studios' Hawkeye mini-series for Disney+ may have been delayed indefinitely. Disney officially launched its streaming service late last year, but it was just a few months earlier that Marvel officially confirmed what content they would produce for it. Through San Diego Comic-Con and D23, they announced eight new shows made exclusively for Disney+. A Hawkeye series starring Jeremy Renner as Clint Barton was among the initial wave, along with shows like WandaVision and Loki. Hawkeye: MCU Kate Bishop Concept Art Officially Revealed. Official Kate Bishop concept art from the Hawkeye TV show has been revealed. Fans had been wondering for years if Clint Barton would ever get his own solo movie.

While the character doesn't seem to be coming to the big screen for a solo outing, Hawkeye will get his own TV show on Disney+. Throughout this year, fans have gotten nuggets of information on Hawkeye. Jeremy Renner Might Be Removed From 'Hawkeye' Over Accusations From Ex-Wife. In case you missed it, Jeremy Renner was accused of threatening to kill his ex-wife and himself in a coke-fueled rage. Hawkeye Concept Art Confirms Lucky the Pizza Dog on Disney+ Hawkeye: Disney+ Series Finds Showrunner. Hawkeye: Jeremy Renner Shares Series Intro at SDCC. Marvel's Hawkeye television show has an animated introduction, which series star Jeremy Renner revealed to the world after its premiere at San Diego Comic-Con 2019. The upcoming show, centered around the master marksman superhero, is one of many set in the Marvel Cinematic Universe which were confirmed for the Disney+ streaming service, along with The Falcon and The Winter Soldier, Loki and WandaVision.

First appearing in Tales of Suspense #57 as an Iron Man villain, Hawkeye has worn a number of hats over the years since renouncing his life of crime to become a member of the Avengers. Jeremy Renner enters in through the crowd! #Hawkeye #MarvelSDCC #AgentMLovesS...