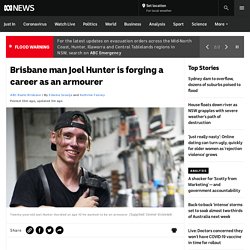 "I could go down the university pathway, that was all set up for me," the 20-year-old told ABC Radio Brisbane. "But I said, 'You know what? I'm going to see if I can take this passion and turn it into something.'" That passion was medieval history, and Joel has been hard at work forging a career as an armourer, sculping reproductions of historic pieces that knights wore hundreds of years ago. "When I was a kid, you'd see knights and you'd see armour and you're like, 'That's so cool, I wish I could swing a sword,'" Joel said. "But as I got older, I guess it's that journey of discovering how people lived back then, and the techniques and challenges that they faced back then.

" But unlike university or a trade, there is no apprenticeship if you want to learn this ancient craft. How witchcraft became a multi-billion dollar industry - ABC News. Yoko Ono once noted: "People respect wizards. 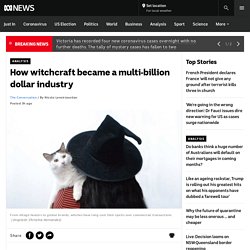 But a witch, my god, we have to burn them. " Witches were maligned for centuries because of their perceived dark power and influence — but could this fear have stemmed from their commercial success? Witches have been savvy business women since the 13th century, when they flourished in the seaside towns of Scotland, England and Finland. Today, witchy toys, crystals, and potion kits are big business and the craft has even cast its spell on some global brands. Helping sailors, healing villagers Some 800 years ago, superstitious sailors would seek out sea witches to purchase wind knots — magical ropes bearing three knots. When women were killed during the witch hunts of the Early Modern period around 1450 to 1750, sailors sought other methods to control the wind. Many witches were excellent healers despite being banned from practising medicine in the 13th century. Witch hunters often treated independent women with suspicion. 'Lord Terence' welcomes you to his medieval realm in the Queensland bush - ABC News.

Driving deep into the Queensland scrub on an unsealed road just outside Tiaro, south-east Queensland, feels like going back in time. 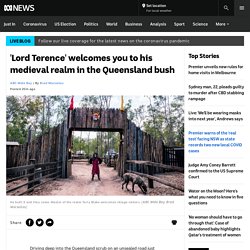 Beyond the fortress wall cars cease to exist and the clock winds back 1,000 years. But with wallabies bounding past and surrounding eucalyptus trees, this little medieval world has a distinctly Australian setting. Victory Village is the "midlife crisis" realm of 40 medieval-inspired dwellings created by Terry Blake and his wife Tonya Osbourne-Blake. Or rather, Lord Terence and Lady Tonya, as they call themselves. When he turned 60 in 2014, Mr Blake decided to build a "manor house" on his property at Riverbend, inspired by travels in Europe and a love of history. Historic medieval battle sees swords and shields clash as Toowoomba's fight knights take each other on - ABC News. Untitled. This article tells the story of how in 1665 an heroic decision of the inhabitants of the small English village of Eyam may have saved the north of England from the spread of the Black Death - the unparalleled disease that killed approximately 25 million Europeans during the period from 1347 -1666. 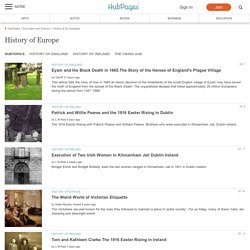 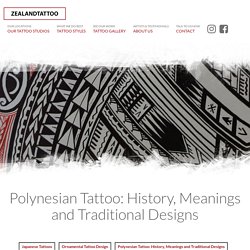 The History of Polynesian TattooThe Process, Main Focus and TraditionDesigns, Symbols and Meanings Source: The Polynesian Tattoo Handbook The origins of Polynesian society There is still debate over the definitive origins of Polynesian culture and that transfers also, to the notion of tattooing. Thousand-year-old coffin under German church may belong to 11th-century archbishop. Posted yesterday at 5:41amSat 8 Jun 2019, 5:41am Archaeologists have lifted the 700-kilogram lid of a 1,000-year-old sarcophagus hidden under the floor of a cathedral in Mainz, Germany. 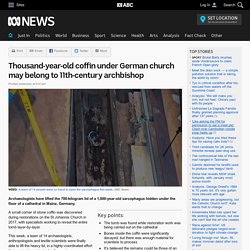 The tomb was found while restoration work was being carried out on the cathedral Bones inside the coffin were significantly decayed, but there was enough material for scientists to processIt's believed the remains could be those of an archbishop, with gold fragments in the sarcophagus strengthening that theory. Images of cockatoo on 13th-century Vatican manuscript inspire trade route rethink. On the margins of a 13th-century manuscript written by Holy Roman Emperor Frederick II, are more than 900 illustrations of birds and falconers. 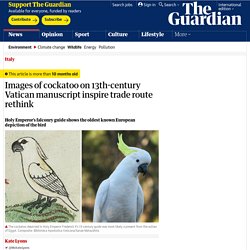 Among the usual hawks, herons, and sparrows familiar to European readers are four sketches of a bird from further afield – an Australasian cockatoo. The images are believed to be the oldest European depiction of the bird, trumping a similar discovery in a 15th-century artwork, and have sparked a reassessment of trading routes that existed more than 700 years ago. The drawings are likely to be of a sulphur-crested cockatoo, a yellow-crested cockatoo or a Triton cockatoo, from the northern tip of Australia, New Guinea, or the islands around New Guinea, and show how trade in the waters around Australia’s north was flourishing in medieval times. Britain's oldest Christian royal burial site 'is the Anglo-Saxon world's Tutankhamun' Updated about an hour agoFri 10 May 2019, 12:13am An underground chamber discovered accidentally by road workers appears to be the site of the earliest Christian royal burial ever found in Britain, archaeologists say, calling it the Anglo-Saxon equivalent of King Tutankhamun's tomb. 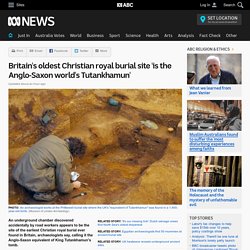 The medieval design innovation that helped save Notre Dame from total destruction. Updated about 5 hours agoWed 17 Apr 2019, 2:34am As Parisians gathered around Notre Dame cathedral on Monday, powerless to do anything but watch it burn while fire raged through the structure, there were fears all would be lost. 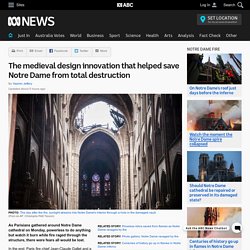 Key points: One expert says Notre Dame would have "likely" been destroyed without the stone vaultsIn the Middle Ages, wide vaults were used to increase the height of buildings and the light that could get inThe fire broke out while the cathedral was undergoing restoration work, prompting questions of a link. Notre Dame cathedral spire collapses as devastating fire tears through Paris landmark. Updated 7 minutes agoTue 16 Apr 2019, 1:00am A catastrophic fire has engulfed Notre Dame cathedral in Paris, gutting and destroying the landmark's spire, and stunning France and the world. 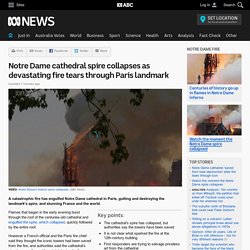 Key points: The cathedral's spire has collapsed, but authorities say the towers have been savedIt is not clear what sparked the fire at the 12th-century buildingFirst responders are trying to salvage priceless art from the cathedral. Salvage crew accidentally find Dutch maritime history's 'missing link' in North Sea. Updated about an hour agoFri 5 Apr 2019, 3:10am It's not everyday that maritime historians find a shipwreck that will substantially change the trajectory of their profession, but for a team of researchers in the Netherlands, this moment has come around by accident.

Key points: A search for missing shipping containers led crews to the shipwreck site The wreck is the oldest that Dutch researchers say they have found in the North Sea The wreck also contains copper plates that shed light on early modern Dutch currency On the bottom of the North Sea, salvage teams — who were looking for shipping containers that fell off a merchant ship in a storm near the Dutch coast — stumbled upon a shipwreck and alerted researchers.

Blue gems in teeth illuminate women's hidden role in medieval manuscripts. Archaeologists in Portugal say 400-year-old shipwreck is the 'discovery of the decade' Posted 35 minutes agoTue 25 Sep 2018, 12:42am Archaeologists searching Portugal's coast have found a 400-year-old shipwreck believed to have sunk near Lisbon after returning from India laden with spices. Ancient temple revealed at Mexican pyramid after damage from 2017 earthquake. Posted Last year's earthquake which damaged a historical site in central Mexico has revealed an ancient temple dating back more than 800 years. Knights of Fire at Kryal Castle show our medieval passion still burns hot. Posted about 5 hours agoSun 8 Jul 2018, 10:09pm It's a period of human history marked by rampant economic inequality, entrenched sexism, horrific violence and the Black Death, but our fascination with the Middle Ages only seems to grow stronger.

Updated Archaeologists have discovered what is believed to be a second Viking settlement in North America on the south-west tip of Canada's Newfoundland province. Experts, using satellite imagery, tracked down the site on the island's Point Rosee peninsula and began excavating it last June. A documentary about their findings, Vikings Unearthed, is to be aired next week on Britain's BBC and the United States' PBS public broadcasters. Norse oral histories that described lost Viking settlements inspired the search, archaeologists involved in the project said in a statement.