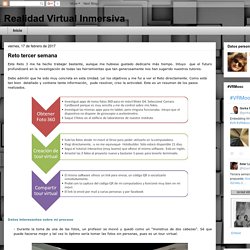 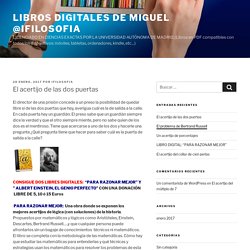 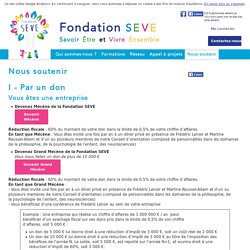 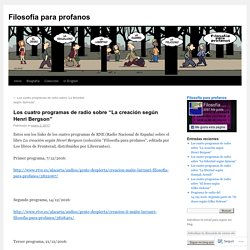 Primer programa, 7/12/2016: Segundo programa, 14/12/2016: Let's make history…by recording it - StoryCorps &amp; TED Prize. The goal of StoryCorps is to provide every person of any background or belief the opportunity to not only tell their story, but share and preserve it for future generations. 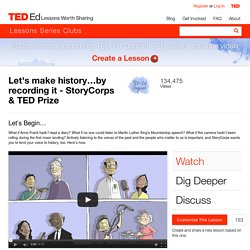 How did this idea get started and why is it such an important goal? This TED Talk: Everyone around you has a story the world need to hear by founder Dave Isay tells the story of StoryCorps. What a wonderful opportunity to share, learn and grow. How to use rhetoric to get what you want - Camille A. Langston. Aristotle, the student of Plato, taught first in Plato’s Academy and then tutored Alexander the Great, and finally established his Athenian philosophical school the Lyceum. 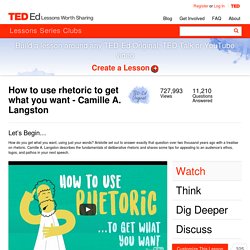 The Lyceum is an amazing place to visit. Watch this video to learn more about the its remains here. In the fourth century BC, Aristotle compiled several of his lectures, two of which he wrote when he taught in Plato’s Academy and two later when teaching in his Lyceum, into the treatise, Rhetoric, which he used as a text. His teaching method differed from others; Aristotle was a peripatetic lecturer, which means he walked around as he spoke with his students instead of standing in the front of a room.

He is accredited with developing the peripatetic teaching style. Aristotle was not born in Athens and was not an orator like the sophists, and one of the most famous orators of the age, Cicero, were. Would you opt for a life with no pain? - Hayley Levitt and Bethany Rickwald. Robert Nozick was a 20th-century American political philosopher. 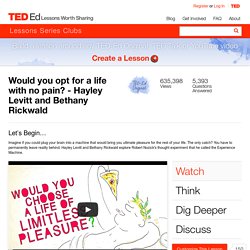 He's best known for writing the book Anarchy, State, and Utopia, which defended free-market libertarianism. In addition to his political theories, he also contributed ideas to the fields of epistemology (the theory of knowledge) and the metaphysics of personal identity. Read more about his work here. Nozick designed his Experience Machine thought experiment to refute the beliefs of hedonists. Hedonism is a form of utilitarianism, a philosophy that that says that the greatest moral action is one that maximizes "utility. " What did democracy really mean in Athens? - Melissa Schwartzberg. How important is service to your government? 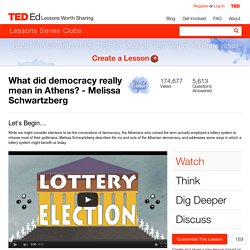 In ancient Greece, it was extremely important. In fact, those who did not participate could be fined, and painted red! Although, it may have not been a democracy for all who lived there, all male citizens had the right to equality, freedom of speech and right to participate in governmental decisions. In fact, it was almost an expectation. How do you know whom to trust? - Ram Neta. Eyewitness testimony is a legal term. 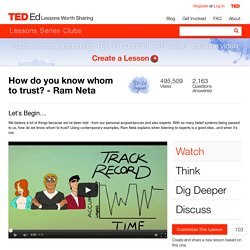 It refers to an account given by people of an event they have witnessed.Eyewitness testimony is the account a bystander gives in the courtroom, describing what they perceived happened during the specific incident under investigation.Scott Fraser studies how humans remember crimes -- and bear witness to them. In this powerful talk, which focuses on a deadly shooting at sunset, he suggests that even close-up eyewitnesses to a crime can create "memories" they could not have seen. Rethinking thinking - Trevor Maber.

An excellent way to better understand the Ladder of Inference is to work in a small group and talk about a pattern of behavior that everyone can relate to. 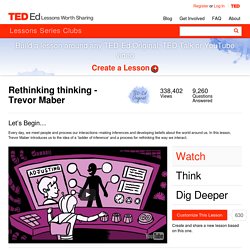 Some examples (in addition to the parking lot example) include: someone cutting in front of you in a line at the store; a friend or family member who is always annoyingly late; or someone who leaves you disappointed because he/she breaks more promises than he/she keeps. As you each share your experience, focus on what assumptions are at play, the conclusions you are each drawing from those assumptions, and what emotions you feel as a result.

What are you seeing and learning as you hear how different everyone’s ladder can be? On one half of a sheet of paper, draw your own version of a ladder (make sure it has 7 rungs!) And label it with the terms that have been presented. Rethinking thinking - Trevor Maber. 5 tips to improve your critical thinking - Samantha Agoos. History of Critical Thinking “The intellectual roots of critical thinking are as ancient as its etymology, traceable, ultimately, to the teaching practice and vision of Socrates 2,500 years ago who discovered by a method of probing questioning that people could not rationally justify their confident claims to knowledge. Confused meanings, inadequate evidence, or self-contradictory beliefs often lurked beneath smooth but largely empty rhetoric.”

“He [Socrates] established the importance of seeking evidence, closely examining reasoning and assumptions, analyzing basic concepts, and tracing out implications not only of what is said but of what is done as well. His method of questioning is now known as "Socratic Questioning" and is the best known critical thinking teaching strategy.

In his mode of questioning, Socrates highlighted the need in thinking for clarity and logical consistency.” More on critical thinking through the ages is available here. 1. Lessons Worth Sharing. How do you know you exist? - James Zucker. René Descartes believed that most of what he acquired and learned came from the senses, but his senses had deceived him in the past. Plato’s Allegory of the Cave - Alex Gendler. Want to read the Allegory of the Cave in its complete format? Go to this site and get started. To better understand the allegory’s larger context, try reading the rest of The Republic by Plato and these classic lectures. Who am I? A philosophical inquiry - Amy Adkins. Need more about The Ship of Theseus?

Find this concept interesting? Confusing? The Turing test: Can a computer pass for a human? - Alex Gendler. To find out more, you can read Turing’s original paper that started it all. Then take a look at actual transcripts of conversations with early chatbots, as well as more recentLoebner prizewinners. For a well-known criticism of the ideas behind the Turing Test, read John Searle’s paper on the Chinese Room thought experiment. Finally, for a closer look at the many elements and strategies involved in both human and computer conversations, check out Brian Christian’s book The Most Human Human. What "Orwellian" really means - Noah Tavlin.

Now you know what 'Orwellian' means. But do you really know? Check out this blog, "Do you really know what 'Orwellian' means? " from the Guardian. The NSA scandal has led many critics to call the U.S. government 'Orwellian.' The poet who painted with his words - Geneviève Emy. Want a few more details about Guillaume Apollinaire? Visit this site. Apollinaire concluded his famous Paris lecture [in French] by saying, “Poets will mechanize (computerize) poetry one day, just like other things in the world have been mechanized.

They will provide a completely new lyricism driven by the motion now taking place with the phonograph and cinema. This poetry is now in its infancy. But watch out, it will soon speak for itself, and a new spirit will fill the universe and manifest itself in the field of letters and art, and in everything that is known.” What makes something "Kafkaesque"? - Noah Tavlin. Kafka is an enigmatic writer, and almost everyone you ask will have a slightly different definition of the word Kafkaesque. In this New York Times interview with Frederick Karl, a biographer of Kafka, Karl describes his definition of ‘Kafkaesque’. In what ways is his definition different from the definition offered by this lesson? In what ways is it similar? The interview also provides some more context about Kafka’s life and background. For a lighter Kafka experience, watch this news parody by The Onion, entitled “Prague’s Kafka International Named Most Alienating Airport”.

See this video to hear their creator, Sir Arthur Conan Doyle, explaining why he created Sherlock in the first place. However, Sherlock Holmes was not the first fictional detective. The evolution of the book - Julie Dreyfuss. Prior to the release of the Amazon Kindle in November 2007, Stephen Levy commented in his Newsweek article, “Amazon: Reinventing the Book,” on the concept of the book as an invention. Quoting Amazon CEO Jeff Bezos directly, Levy writes that “‘books are the last bastion of analog.” This phrasing suggests the book as a set of definable qualities that can be manipulated, redefined, and commodified. The controversial origins of the Encyclopedia - Addison Anderson. Check out the Encyclopedia of Diderot and d’Alembert as translated from French! Try a search on any topic and see what comes up.