Can a computer be creative? Modelling Creativity: Identifying Key Components through a Corpus-Based Approach. Abstract Creativity is a complex, multi-faceted concept encompassing a variety of related aspects, abilities, properties and behaviours. 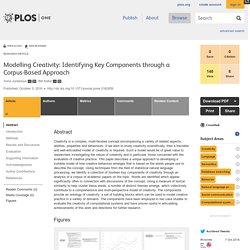 If we wish to study creativity scientifically, then a tractable and well-articulated model of creativity is required. Such a model would be of great value to researchers investigating the nature of creativity and in particular, those concerned with the evaluation of creative practice. This paper describes a unique approach to developing a suitable model of how creative behaviour emerges that is based on the words people use to describe the concept. Using techniques from the field of statistical natural language processing, we identify a collection of fourteen key components of creativity through an analysis of a corpus of academic papers on the topic. Citation: Jordanous A, Keller B (2016) Modelling Creativity: Identifying Key Components through a Corpus-Based Approach. Editor: Peter Csermely, Semmelweis University, HUNGARY Introduction Methods Fig 2. Techniques. Triz. Neukom Institute Turing Tests in Creativity.

Links between Arts, Learning, and Neuroscience Examined in New NEA Report. WASHINGTON, DC – What are the links between brain function and creativity? 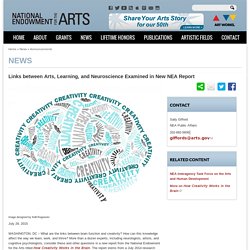 How can this knowledge affect the way we learn, work, and thrive? More than a dozen experts, including neurologists, artists, and cognitive psychologists, consider these and other questions in a new report from the National Endowment for the Arts titled How Creativity Works in the Brain. The report stems from a July 2014 research workshop co-sponsored by the NEA and the Santa Fe Institute, an independent, nonprofit research and education center. The report follows other NEA initiatives at the intersection of the arts, health, and science, including the NEA/Walter Reed Healing Arts Partnership. “The time is ripe for bringing together artists, scientists, and educators to collaboratively confront the question of how creativity functions in the brain,” said Bill O’Brien, NEA senior advisor to the chairman for innovation.

Among the conclusions from the meeting: About the National Endowment for the Arts. Why Everyone From Beethoven, Goethe, Dickens, Darwin To Steve Jobs Took Long Walks and Why You Should Too. One day, when Marc Andreessen, the money man behind such tech giants as Facebook, Twitter, and Zynga, was out driving around his home in Palo Alto, California, he nearly hit a crazy old man crossing the street. Looking back at the fool he had nearly run over he noticed the trademark blue jeans and black turtle neck. “Oh my god! I almost hit Steve Jobs!” He thought to himself. It was Jobs that day, out on one of his many walks around the Palo Alto area, where Apple are based. Here are five reasons that walking is one of the best ways you can spend your time, and how it can help you think better, get more done, relate better, and live longer. 01. Though most people have always thought that their best ideas came when the were on the move, now there is scientific evidence to back them up. 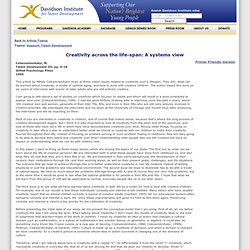 Talent Development III, pp. 9-18 Gifted Psychology Press 1995 This article by Mihaly Csikszentmihalyi looks at three major issues related to creativity over a lifespan. They are: what can be learned about creativity; a model of optimal aging; and how to work with creative children. The author based this work on six years of interviews with scores of older adults who are still actively creative. I am going to talk about a set of studies on creativity which focuses on adults and which will result in a book scheduled to appear next year (Csikszentmihalyi, 1996).

Most of you are interested in creativity in children, and of course that makes sense, because that's where the long process of creative development begins. In this paper, I want to bring up three major issues, which are among the topics of our study. The third issue is to use what we have learned about creativity in later life as a model for how to deal with creative children. Creativity 2. Creativity Fluency. Creativity. Creativity. Creativity (public) on Springpad. The Accomplished Creative’s Afflictionswww.creativitypost.comAccomplished creatives suffer afflictions often unique to their station in life. 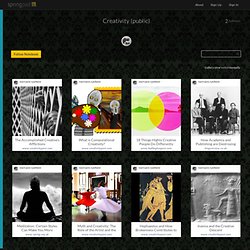 These afflictions can stall them from experiencing deeper fulfillment and having greater impact. Speaker & creativity consultant Jeffrey Davis defines three such patterns and offers suggestions for addressing them. Bernard.ryefield Apr 14th 18 Things Highly Creative People Do Differentlywww.huffingtonpost.comCreativity works in mysterious and often paradoxical ways. Creative thinking is a stable, defining characteristic in some personalities, but it may also change based on situation and context. Inspiration and ideas often arise seemingly out of nowhere and then fail to show up when we most need them, and creative thinking requires complex cognition yet is completely distinct from the thinking process.