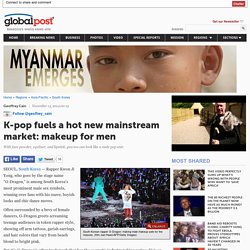 Often surrounded by a bevy of female dancers, G-Dragon greets screaming teenage audiences in token rapper style, showing off arm tattoos, garish earrings, and hair colors that vary from beach blond to bright pink. But it’s G-Dragon’s other trademark that has the cosmetic industry taking notice: He’s an ostentatious applier of makeup. And forget about the fringe gender-bending realm of 1980s pop stars like Boy George and David Bowie. The massive popularity of K-pop is fueling mainstream emulation. The result: South Korea is home to a booming market for male beauty products. Of course, male makeup sales pale next to the market for women, and only a minority of Korean men apply a raft of products such as “BB Cream” on a daily basis. Confessions of a Lumbersexual. The Inbetweeners: 'Lad culture doesn’t represent young men in this country'

Bird, Thomas, Harrison and Buckley first appeared as The Inbetweeners, four socially dysfunctional teenage boys, on an E4 sitcom of the same name in 2008. 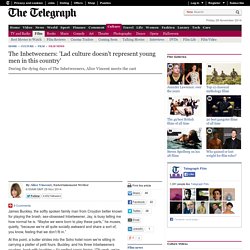 After three series in two years, a coming-of-age film was released: The Inbetweeners Movie, in 2011. Its 18-30 holiday resort setting and booze and sex storylines encouraged sneers from critics, but cinemagoers paid no attention: the film had the most successful opening weekend ever for a comedy movie in the UK. Three years later and The Inbetweeners 2 was released. Simon and Will, eager to escape their underwhelming first terms at university, are encouraged by Neil to reunite with Jay, who reports of a glamourous life in Australia. Of course, when they arrive, the reality is underwhelming, and one peppered with failed attempts at romance and toilet humour. Yes, Men Struggle With Body Image Issues, Too: Here's My Story  By Chris Tognotti I can remember the first time I ever consciously ate something when I wasn't really hungry. 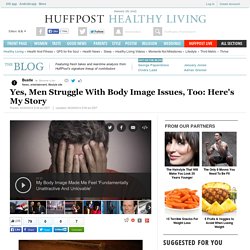 I was young, maybe about six. 5 Reasons Real Men Should Be In Underwear Ads...Not Models. (06 Photos) How Society's Addiction to Masculinity Has Led to Sexual Hazing Between Men  Here in the metro New York City area the Sayreville (N.J.) 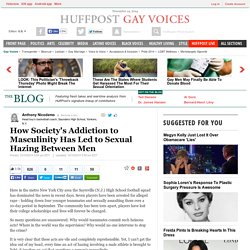 High School football squad has dominated the news in recent days. Seven players have been arrested for alleged rape - holding down four younger teammates and sexually assaulting them over a 10-day period in September. The community has been torn apart, players have lost their college scholarships and lives will forever be changed. So many questions are unanswered.

Why would teammates commit such heinous acts? It is very clear that these acts are vile and completely reprehensible. Take this particular case. In my mind, I envision one reason for doing this: taking away someone's "manhood. " THE BURDEN OF MASCULINITY. Photo: Darshan Chakma I can imagine people rolling their eyes thinking, “What burden?” 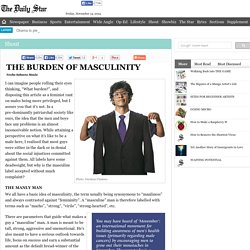 Dapper Laughs is dead – and ITV didn’t even turn up to the comedian's funeral - Features - Comedy. Or maybe you’re just interested in any comedy as long as it’s good, in which case, Mark Watson, Katherine Ryan, James Acaster, Stewart Lee and Romesh Ranganathan are all playing tonight, Toast of London and Babylon are back on television and, if you’re quick, you can catch BBC4’s Detectorists before it goes off iPlayer. 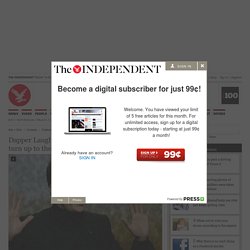 The UK comedy scene is a big, beautiful thing. The nominations for the British Comedy Awards this week proved as much, ranging as they did from Monty Python to Moone Boy, Harry and Paul to the Inbetweeners. This week though you could be forgiven for thinking that scene consists of one man. Lad luxe: the fetishisation of the working class in fashion is the height of snobbery. Lads. 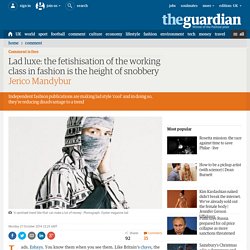 Eshays. You know them when you see them. Like Britain’s chavs, the Australian youth subculture is widely regarded with disdain. 'Lad' culture calculated and malicious. 35 18ShareThis ONLY a few weeks ago I had briefly considered the utility of some sort of mandatory social awareness class for students. 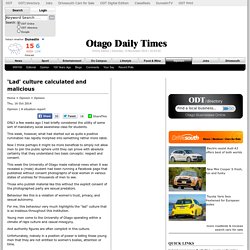 This week, however, what had started out as quite a positive rumination has rapidly morphed into something rather more rabid. Now I think perhaps it might be more beneficial to simply not allow men to join the public sphere until they can prove with absolute certainty that they understand two basic concepts: respect and consent. This week the University of Otago made national news when it was revealed a (male) student had been running a Facebook page that published without consent photographs of local women in various states of undress for thousands of men to see.

Those who publish material like this without the explicit consent of the photographed party are sexual predators. Behaviour like this is a violation of women's trust, privacy, and sexual autonomy.