Postfix rate limiting - Politeness goes a long way - steam.io. When sending large amounts of bulk emails, it may be necessary to enforce rate limiting to prevent the ISP’s from blocking your servers. 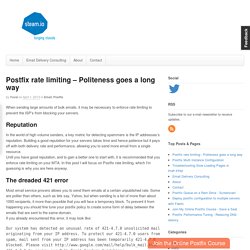 Reputation In the world of high volume senders, a key metric for detecting spammers is the IP addresses’s reputation. Building a good reputation for your servers takes time and hence patience but it pays off with both delivery rate and performance, allowing you to send more email from a single resource. Until you have good reputation, and to gain a better one to start with, it is recommended that you enforce rate limiting on your MTA.

In this post I will focus on Postfix rate limiting, which I’m guessing is why you are here anyway. The dreaded 421 error Most email service provers allows you to send them emails at a certain unpublished rate. Our system has detected an unusual rate of 421-4.7.0 unsolicited mail originating from your IP address. For bounced emails, what is the difference between a hard and soft bounce? A 'bounce' means that your email was sent to a specific address, but the mail server that received the email for that person has sent it back, saying it could not be delivered. 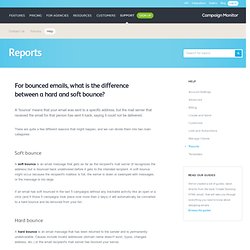 There are quite a few different reasons that might happen, and we can divide them into two main categories: Soft bounce A soft bounce is an email message that gets as far as the recipient's mail server (it recognizes the address) but is bounced back undelivered before it gets to the intended recipient. A soft bounce might occur because the recipient's mailbox is full, the server is down or swamped with messages, or the message is too large.

If an email has soft bounced in the last 5 campaigns without any trackable activity like an open or a click (and if those 5 campaigns took place over more than 2 days) it will automatically be converted to a hard bounce and be removed from your list. SMTP transfer model svg. Simple Mail Transfer Protocol. Postfix (software) In computing, Postfix is a free and open-source mail transfer agent (MTA) that routes and delivers electronic mail, intended as an alternative to the widely used Sendmail MTA. 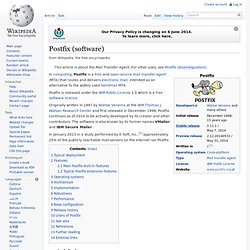 Postfix is released under the IBM Public License 1.0 which is a free software licence. In January 2013 in a study performed by E-Soft, Inc.,[2] approximately 25% of the publicly reachable mail-servers on the Internet ran Postfix. Postfix implements a limited number of features in the MTA, and relies on third-party extensions for the rest. Postfix extensions use the SMTP or Milter (Sendmail mail filter) protocols which both give full control over the message envelope and content, or a simple text-based protocol that enables complex SMTP-level access control policies. Sendmail. This article is about the mail transfer agent. 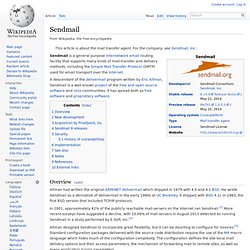 For the company, see Sendmail, Inc.. Sendmail is a general purpose internetwork email routing facility that supports many kinds of mail-transfer and delivery methods, including the Simple Mail Transfer Protocol (SMTP) used for email transport over the Internet. A descendant of the delivermail program written by Eric Allman, Sendmail is a well-known project of the free and open source software and Unix communities.

It has spread both as free software and proprietary software. Overview[edit] Allman had written the original ARPANET delivermail which shipped in 1979 with 4.0 and 4.1 BSD. In 2001, approximately 42% of the publicly reachable mail-servers on the Internet ran Sendmail.[1] More recent surveys have suggested a decline, with 10.09% of mail servers in August 2013 detected as running Sendmail in a study performed by E-Soft, Inc.[2] New development[edit] Qmail. Qmail is a mail transfer agent (MTA) that runs on Unix. 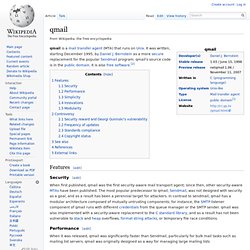 It was written, starting December 1995, by Daniel J. Bernstein as a more secure replacement for the popular Sendmail program. qmail's source code is in the public domain. It is also free software.[2] Features[edit] Security[edit] Performance[edit] When it was released, qmail was significantly faster than Sendmail, particularly for bulk mail tasks such as mailing list servers. qmail was originally designed as a way for managing large mailing lists Simplicity[edit] At the time of qmail's introduction, Sendmail configuration was notoriously complex, while qmail was simple to configure and deploy. Innovations[edit] qmail encourages the use of several innovations in mail (some originated by Bernstein, others not):

The Postfix Home Page. How to Enable Local SMTP Server (Postfix) on OS-X Leopard. Configuring Postfix to Send Mail from Mac OS X Mountain Lion - BenjaminRojas.net. I recently upgraded my Mac to use Apple’s latest operating system, Mountain Lion, and in so doing, wiped out my postfix configuration that I had previously set up with advice from many different blogs. 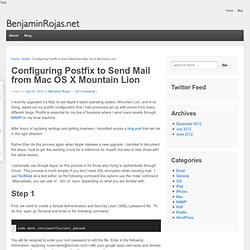 Postfix is essential for my line of business where I send many emails through MAMP on my local machine. After hours of updating settings and getting nowhere, I stumbled across a blog post that set me in the right direction. Rather than do this process again when Apple releases a new upgrade, I decided to document the steps I took to get this working (more for a reference for myself, but also to help those with the same issues). I personally use Google Apps, so this process is for those also trying to authenticate through Gmail. This process is much simpler if you don’t need SSL encryption when sending mail. Step 1 First, we need to create a Simple Authentication and Security Layer (SASL) password file. You will be required to enter your root password to edit the file. Save and exit. Bounce message. Postfix Pflogsumm Log Entry Summary. May 11, 2013 The Postfix Log Entry Summarizer. 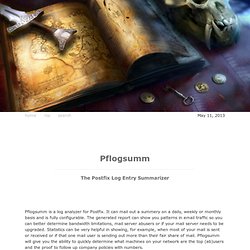 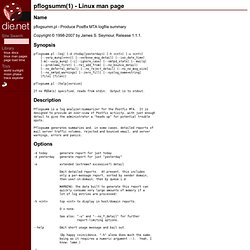