CAF Fighters. GoldLink - And After That, We Didn't Talk [FULL ALBUM] How to Create a Mind: The Secret of Human Thought Revealed: Ray Kurzweil: 9780143124047: Amazon.com: Books. Surviving Alone in Alaska. Canva named the 2015 Coolest Company in Tech. Loaded: 0% Progress: 0% Melanie Perkins' Canva just got a huge round of funding to value it at $165 million. 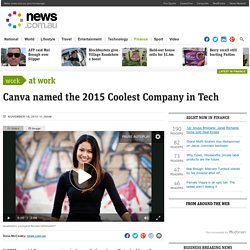 She told Alan Kohler about the importance of investing in innovation. Melanie Perkins, CEO of Canva, photographed at their offices in Surry Hills. Picture: Britta Campion WITH no middle managers, two in-house chefs and a well-stocked bar, the offices of graphic design disrupter Canva sound pretty inviting. But work perk expectations are high in the technology space, so it’s still a massive honour for the start-up to win JobAdvisor’s annual Coolest Company in Tech award. Founder and chief executive Melanie Perkins, 29 — who BRW last month Australia’s second-richest woman under 40 — is technically the boss. But the fast-growing start up boasts a collaborative work culture among its growing team of developers, graphic designers, user experience (UX) designers and marketing gurus. Soylent.com - details. 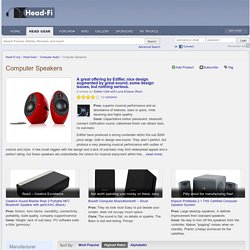 I've had mine for four years and it has done every duty in the book that a set of speakers can do. Its been moved back and forth from dorm to dorm, apartment to apartment - all the while ensuring Im kicked out as soon as I arrive. These things rock! The small speakers do tend to be outclassed by the bass driver. 100% Positive Reviews Swan M10 “Like many others, I was very skeptical about the Swans M10 2.1. Klipsch ProMedia 2.1 THX Certified Computer Speaker System “Purchased these this week, and had them replaced with another set - which exhibited the same flaw. 82% Positive Reviews JBL SoundSticks II 2.1 Plug and Play Multimedia Speaker System “ I just got these and am impressed with the detail and clarity of these speakers. 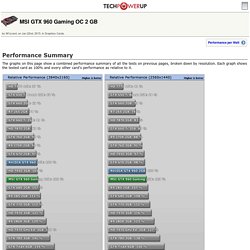 Each graph shows the tested card as 100% and every other card's performance as relative to it. PCCG Assembled Systems - PC Case Gear. JIMI HENDRIX 12 STRING BLUES. The Balmain Boat Company. 33 Simple Ways To Fall Back In Love With Your Life. It happens to the best of us – life starts to stagnate and drag. 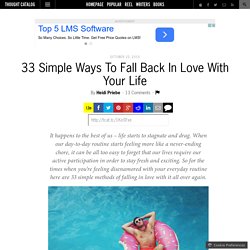 When our day-to-day routine starts feeling more like a never-ending chore, it can be all too easy to forget that our lives require our active participation in order to stay fresh and exciting. So for the times when you’re feeling disenamored with your everyday routine here are 33 simple methods of falling in love with it all over again. 1. Travel often. Designate one weekend a month to get yourself out of the city, out of the country or at the least, out the front door of your apartment. 2. Debonair Time. Playlist. Browse Origin Games. PHILOSOPHY - Schopenhauer. Northlane - Ra. Rittz - Bounce (Feat. Twista) - Official Music Video. Nightshift - Something About Your Love ft Dominic King (SYAP remix) RandomThink Labs. Stay sea. Defense of the Australians - Defense of the Australians DOTA 2 League. Dendrite - Rewrite. Create an account. Talks to watch when you don't know what to do with your life.

6 must-see documentaries about sustainability and the environment - Al Gore’s An Inconvenient Truth made waves around the world when it burst onto screens in 2006. 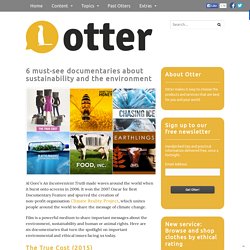 It won the 2007 Oscar for Best Documentary Feature and spurred the creation of non-profit organisation Climate Reality Project, which unites people around the world to share the message of climate change. Film is a powerful medium to share important messages about the environment, sustainability and human or animal rights. Here are six documentaries that turn the spotlight on important environmental and ethical issues facing us today. The True Cost (2015) The True Cost brings to light some shocking facts about the fashion industry that beg the question: who really pays the price for our clothes? Fashion aficionados shouldn’t panic though. 7 Strange Questions That Help You Find Your Life Purpose. One day, when my brother was 18, he waltzed into the living room and proudly announced to my mother and me that one day he was going to be a senator. 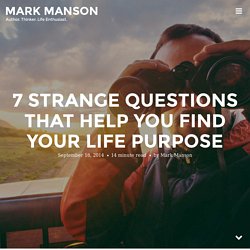 My mom probably gave him the “That’s nice, dear,” treatment while I’m sure I was distracted by a bowl of Cheerios or something. But for fifteen years, this purpose informed all of my brother’s life decisions: what he studied in school, where he chose to live, who he connected with and even what he did with many of his vacations and weekends. Hip Hop ' Funk ' Jazz - Ours Samplus HD.