The language of the cockpit is technical, obscure – and irresistibly romantic. The day I first flew in the cockpit of an airliner, I fell in love with the sights, of course, but also the sounds. 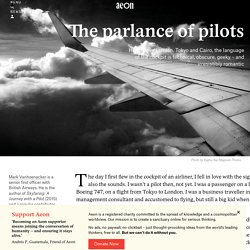 I wasn’t a pilot then, not yet. I was a passenger on a British Airways Boeing 747, on a flight from Tokyo to London. I was a business traveller in those days, a management consultant and accustomed to flying, but still a big kid when it came to anything to do with airplanes. I asked one of the flight attendants if I could visit the cockpit, as I always did before the attacks of 11 September 2001. Soon I was heading up to meet the pilots in ‘the pointy end’ (their term) for a long chat somewhere over Russia. Strapped by a five-point harness into a seat behind the grey-haired captain, I was dumbstruck by the sight of the North Sea, and the Thames Estuary, and then of London itself, its sprawling, miniaturised perfections all the more miraculous after so many long hours over the forests and tundra of Siberia. The Language of Air Travel. Believe it or not – Aviation English is one of the most in-demand forms of English around the world. 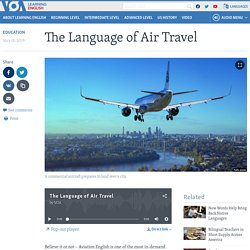 Why? Because English is the language of the skies. The International Civil Aviation Organization is a specialized agency of the United Nations. In 2003, the organization set a deadline of March 2008 for pilots and air traffic controllers at international airports to pass English proficiency exams. A high level knowledge of English continues to be required in international aviation today. Some form of Aviation English is commonly used by many people working in the industry. Aviation English differs from Standard English in a few other important ways. Few pilots know this specialized language better than Clarence “Clyde” Romero. A native of New York City, he worked as a pilot for 38 years before retiring in 2015. 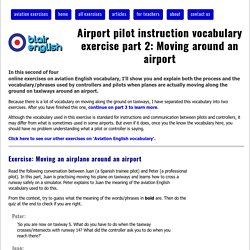 In this part, Juan is practising moving his plane on taxiways and learns how to cross a runway safely on a simulator. Peter explains to Juan the meaning of the aviation English vocabulary used to do this. From the context, try to guess what the meaning of the words/phrases in bold are. Then do the quiz at the end to check if you are right. Peter:'So you are now on taxiway S. Airport pilot instruction vocabulary exercise part 1: Leaving the terminal gate.

Airport pilot instruction vocabulary exercise part 4: Taking off from a runway. U1 Practising saying numbers. Learn to talk like a pilot: Phraseology. If you have ever had the pleasure of riding jumpseat in the cockpit, meaning that you get to sit upfront with the pilots, you know how complex the communication between pilots and Air Traffic Controllers (ATC) sound to the untrained ear (unless you are a pilot/ATC yourself of course). 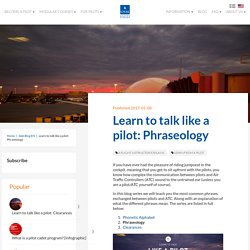 In this blog series we will teach you the most common phrases exchanged between pilots and ATC. Along with an explanation of what the different phrases mean. Quiz on radiotelephonic alphabet. ICAO radiotelephony alphabet. Listen to Live ATC (Air Traffic Control) Communications. Communication in Aviation (barriers in flight operations) - AviationKnowledge. Physical barriers often cause great difficulties and lead to confused messages. 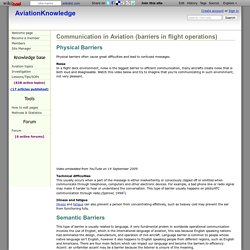 Noise In a flight deck environment, noise is the biggest barrier to efficient communication, many aircrafts create noise that is both loud and disagreeable. Watch this video below and try to imagine that you're communicating in such environment, not very pleasant. Video embedded from YouTube on 14 September 2009 Technical difficulties This usually occurs when a part of the message is either inadvertently or consciously clipped off or omitted when communicate through telephones, computers and other electronic devices.

For example, a bad phone line or radio signal may make it harder to hear or understand the conversation. Illness and fatigueIllness and fatigue can also prevent a person from concentrating effetively, such as heavey cold may prevent the ear from functioning fully. This type of barrier is usually related to language. Picture embedded from Communication on 14 September 2009 References 3. 4. 5. 6. Student pilot query on comms. 4 Steps To Better ATC Radio Communications - MzeroA Flight Training. VFR Communications - A Pilot-Friendly Manual - PilotWorkshops. There have been video courses and software programs built to tackle the problem of pilot communications. 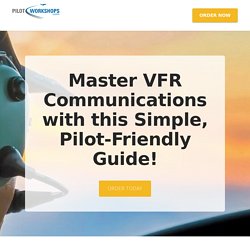 While these tools can help, we found that sometimes a simple printed manual is the best way to learn. For many years, we have been selling our line of Pilot-Friendly GPS Manuals that help pilots master the complexities of Garmin GPS Units. These manuals provide step-by-step, task oriented training – and pilots love them! We’ve sold thousands of these manuals because they get the job done in a simple, practical way. We figured, if the Pilot Friendly GPS Manuals worked so well, why not create one that tackles radio communication in the same no-nonsense style. The new Pilot-Friendly Manual for VFR Communications teaches you exactly what to say, when – in every kind of VFR flight situation. Non Towered Airport Comms. Landing without ATC.