Manus Machina: We are evolving. Pinch VR. An ultra-thin smartphone case unfolding into a Virtual Reality desktop you can touch. 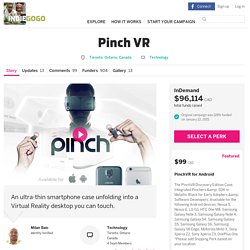 Pinch is a smartphone case for iOS & Android that converts into a wearable virtual reality experience. This case, combined with a free companion app, brings what you're seeing to life. Pinch is the first VR platform that fits in your pocket, allowing you to use your phone traditionally or as a virtual reality headset with integrated controllers. The Cordon team has developed a patent-pending prototype for the only pocket sized mobile platform bringing VR headsets out of the gaming world and into the mainstream. The device is controlled by optical control rings worn on index fingers that pinch to click with users’ hands.

The Cordon Development Labs are constantly evolving Pinch to prepare the product for manufacturing & distribution. Being an independent company, Cordon is seeking support from backers to help bring Pinch to market with development in several key areas: Device Support & Sizes. StarVR. FOVE (@FOVEinc) Pre-order Prio-VR. For more information please visit PrioVR.com Pre-order Information A $50 deposit will be charged at checkout. 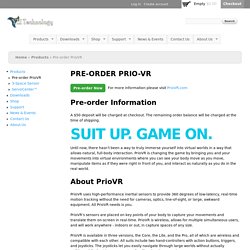 The remaining order balance will be charged at the time of shipping. Until now, there hasn’t been a way to truly immerse yourself into virtual worlds in a way that allows natural, full-body interaction. PrioVR is changing the game by bringing you and your movements into virtual environments where you can see your body move as you move, manipulate items as if they were right in front of you, and interact as naturally as you do in the real world. About PrioVR PrioVR uses high-performance inertial sensors to provide 360 degrees of low-latency, real-time motion tracking without the need for cameras, optics, line-of-sight, or large, awkward equipment.

PrioVR’s sensors are placed on key points of your body to capture your movements and translate them on-screen in real-time. PrioVR Versions. Reality is not enough… Sixense. Tactical Haptics. Reactive Grip™ touch feedback has been built into devices with two different form factors: a handle-based device that is similar to current motion controllers (held in a “power grip”) and a precision/pinch grip device, for interactions with greater precision. 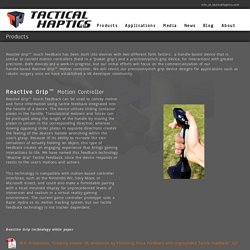 How Oculus Plans to Fix One of VR's Biggest Problems. You’re in an unfamiliar world. 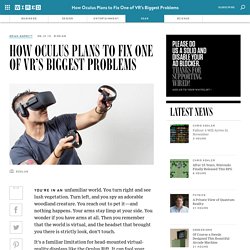 You turn right and see lush vegetation. Turn left, and you spy an adorable woodland creature. You reach out to pet it—and nothing happens. Your arms stay limp at your side. You wonder if you have arms at all. It’s a familiar limitation for head-mounted virtual-reality displays like the Oculus Rift. Oculus Touch, announced Thursday alongside the consumer-ready version of the Rift headset, comprises two handheld controllers—think double-fisted Wii remotes as imagined by Darth Vader.

“I’ve seen thousands of people inside the Rift now,” Oculus founder Lucky Palmer said during the Oculus Touch reveal. Click to Open Overlay Gallery Now, at least, when they reach out, they’ll have something to grab. You’ll be able to give invading alien hordes not just a phaser blast but a middle finger. That’s important if you want to push virtual-reality gaming beyond the single-controller inputs that currently dominate, says Gartner tech analyst Brian Blau.

Go Back to Top. How Oculus Plans to Fix One of VR's Biggest Problems.