Why our children are so bored at school, cannot wait, get easily frustrated a... “My son doesn’t like vegetables.” 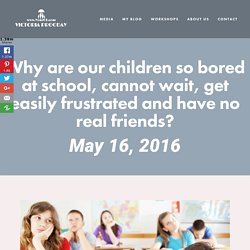 “She doesn’t like going to bed early.” “He doesn’t like to eat breakfast.” “She doesn’t like toys, but she is very good at her iPad” “He doesn’t want to get dressed on his own.” “She is too lazy to eat on her own.” This is what I hear from parents all the time. 4. We have created an artificial fun world for our children. 5. We are all busy, so we give our kids digital gadgets and make them “busy” too. The brain is just like a muscle that is trainable and re-trainable. You can make a difference in your child’s life by training your child’s brain so that your child will successfully function on social, emotional, and academic levels. 1. 2. Make them wait!!! 3. Make a schedule for meal times, sleep times, technology timeThink of what is GOOD for them- not what they WANT/DON’T WANT. 4. Folding laundry, tidying up toys, hanging clothes, unpacking groceries, setting the table, making lunch, unpacking their lunch box, making their bedBe creative. 5.

Leading Improvement through the Teaching School. In September 2011 we began work as one of the first wave of teaching schools. 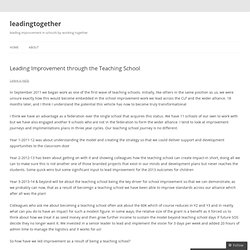 Initially, like others in the same position as us, we were unsure exactly how this would become embedded in the school improvement work we lead across the CLF and the wider alliance. 18 months later, and I think I understand the potential this vehicle has now to become truly transformational I think we have an advantage as a federation over the single school that acquires this status. We have 11 schools of our own to work with but we have also engaged another 9 schools who are not in the federation to form the wider alliance. I tend to look at improvement journeys and implimentations plans in three year cycles.

Our teaching school journey is no different. Year 1-2011-12 was about understanding the model and creating the strategy so that we could deliver support and development opportunities to the classroom door. Education, learning & technology. Published on June 30th, 2013 | by Mark Anderson 4inShare Image licensed from Simpologist: “TeachMeet at Clevedon works because people believe in it” That was the recent reflection on TeachMeet Clevedon by Jen Ludd on her blog here which in many ways has prompted me to write this post. 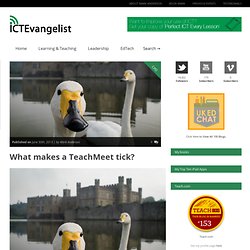 Not a rebuttal, but a celebration of TeachMeets, TeachMeet culture, where it has come from, what I’ve learned from TeachMeets at Clevedon and where they may go in the future. I’ve written a number of times on Teachmeets such as “Learning Rocks“, “What is a TeachMeet anymore?” At the start of the journey of TeachMeets at Clevedon, following my visit to one in Bristol with Sally Thorne (@mrsthorne), I received support and help from the Vital organisation and in particular Clare Fenwick (@csf0961) in setting up the first TeachMeet at Clevedon.

Something which I believe we started too which has become a bit of a regular thing at many a Teachmeet across the UK has been the development of the keynote speaker. Cutting-edge ideas for system reform: What works is what's best. Language learning in focus. BECOMING A MATHEMATICIAN. This is about how, as teachers, we can establish a classroom culture in which students are creative and independent. 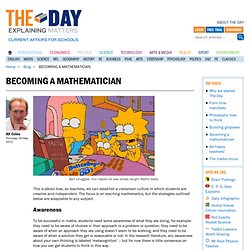 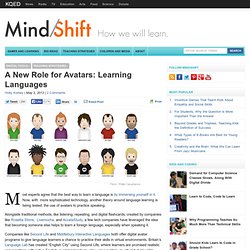 Now, with more sophisticated technology, another theory around language learning is being tested: the use of avatars to practice speaking. Alongside traditional methods, like listening, repeating, and digital flashcards, created by companies like Rosetta Stone, Livemocha, and AccelaStudy, a few tech companies have leveraged the idea that becoming someone else helps to learn a foreign language, especially when speaking it. Companies like Second Life and Middlebury Interactive Languages both offer digital avatar programs to give language learners a chance to practice their skills in virtual environments. “Speaking practice was only possible in the classroom, and that meant very little practice for students who have no contact with English outside their school.” [RELATED READING: Can an Online Game Crack the Code to Language Learning?] 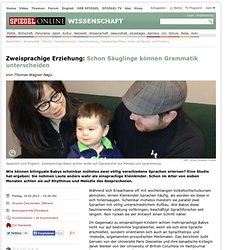