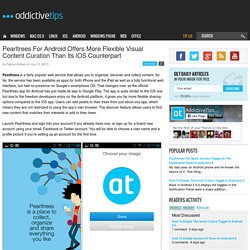 So far, the service has been available as apps for both iPhone and the iPad as well as a fully functional web interface, but had no presence on Google’s smartphone OS. That changes now, as the official Pearltrees app for Android has just made its way to Google Play. The app is quite similar to the iOS one but due to the freedom developers enjoy on the Android platform, it gives you far more flexible sharing options compared to the iOS app. Users can add pearls to their trees from just about any app, which means they are not restricted to using the app’s own browser. The discover feature allows users to find new content that matches their interests to add to their trees. Launch Pearltrees and sign into your account if you already have one, or sign up for a brand new account using your email, Facebook or Twitter account. You start off with no pearls and one pearltree. Advertisement. Content curation service Pearltrees hits Android, and looks set to become a ‘post-PC file manager’

Quick Tip: Install Pearltrees Bookmarklet on iPhone. After my recent accolades on Pearltrees service, I received a comment from a frequent Pearltrees user asking about installing the Bookmarklet to iOS Safari on his iPhone. 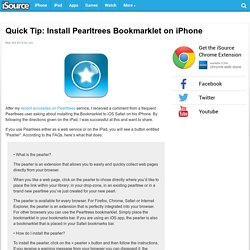 By following the directions given on the iPad, I was successful at this and want to share. If you use Pearlrees either as a web service or on the iPad, you will see a button entitled “Pearler”. According to the FAQs, here’s what that does: • What is the pearler? The pearler is an extension that allows you to easily and quickly collect web pages directly from your browser.When you like a web page, click on the pearler to chose directly where you’d like to place the link within your library: in your drop-zone, in an existing pearltree or in a brand new pearltree you’ve just created for your new pearl.The pearler is available for every browser. Enough of the teasing, here’s what to do on an iPad (and hence iPhone). First… Then follow the instructions on the right side of the image below to set up a bookmark Continue reading:

Organize The Best Of The Web In Your Own Visual Library On Pearltrees [Chrome] Advertisement Just a month back we had a brief but interesting discussion where a reader asked about Pearltrees and what was good about their visual way of curating web content. 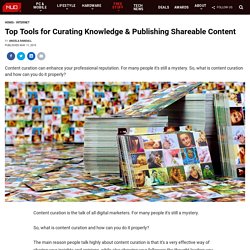 I had heard about Pearltrees before, but had never really got down to using it. The one phrase that has been consistently used to describe it is – visually pleasing. Now, we know that the more content we bookmark and stuff away for reading later, the more onerous it becomes to manage them. Social bookmarking helps to tackle information overload, but its management actually falls upon us. Techmamas – Curating the Best of Tech and Social Media for Families. Many people search the web, read content every day and share that content. 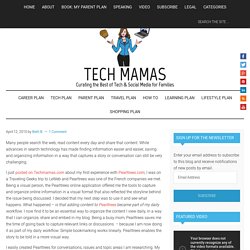 While advances in search technology has made finding information easier and easier, saving and organizing information in a way that captures a story or conversation can still be very challenging. I just posted on Techmamas.com about my first experience with Pearltrees.com; I was on a Traveling Geeks trip to LeWeb and Pearltrees was one of the French companies we met.

Being a visual person, the Pearltrees online application offered me the tools to capture and organize online information in a visual format that also reflected the storyline behind the issue being discussed. Pearltrees Puts Its Sharing Features into Hyperdrive. Paris-based Pearltrees just launched a nice update to its online curation service that takes its sharing features to a new level. 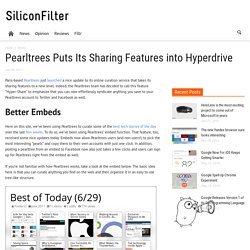 Indeed, the Pearltrees team has decided to call this feature “Hyper-Share” to emphasize that you can now effortlessly syndicate anything you save to your Pearltrees account to Twitter and Facebook as well. Here on this site, we’ve been using Pearltrees to curate some of the best tech stories of the day over the last few weeks. To do so, we’ve been using Pearltrees’ embed function. That feature, too, received some nice updates today. Pearltrees: a multifunction visual bibliographic tool. While preparing the bibliography on energy security foresight, I was wondering if it would be useful to also apply a visually appealing approach to bibliographies, which would then be conceptualized as a product. 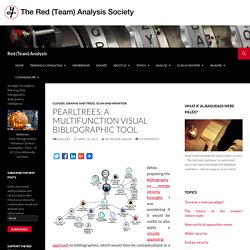 As usual, there is no simple answer to this question, and if the classical bibliography will most probably have to be kept for a while, Pearltrees also appears as a perfect bibliographic tool. Because delivery of product must consider both the product’s material support and the recipient or customer, then the traditional way to write a bibliography will probably have to be kept for some time. Indeed, for anything that uses paper and print as support, the usual, alphabetical bibliography is best.It is furthermore the most practical way to find a reference as quickly as possible, especially for long bibliographies. PearlTrees: Visually Organize and Share Web Bookmarks. Pearltrees [pearltrees.com] is a new online visualization tool that allows users to organize their favorite content found on the Web as a network graph, which then reveals the connections between the interests of people. 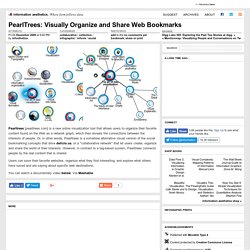 Or, in other words, Pearltrees is a somehow alternative visual version of the social bookmarking concepts that drive delicio.us, or a "collaborative network" that let users create, organize and share the world of their interests. However, in contrast to a tag-based system, Pearltrees connects people by the real content that is shared. Users can save their favorite websites, organize what they find interesting, and explore what others have saved and are saying about specific web destinations. You can watch a documentary video below. Via Mashable.

Pearltrees Can Now Automatically Import And Organize Your Twitter And Facebook Posts. In 2009, Pearltrees started out as a bookmarking service with a quirky interface. 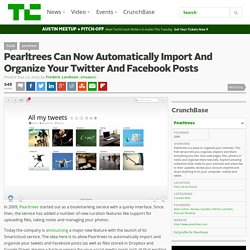 Since then, the service has added a number of new curation features like support for uploading files, taking notes and managing your photos. Today the company is announcing a major new feature with the launch of its Smartcloud service. The idea here is to allow Pearltrees to automatically import and organize your tweets and Facebook posts (as well as files stored in Dropbox and Google Drive). Having a backup service for your social media posts isn’t all that exciting and novel, but Smartcloud takes this data and then automatically organizes it by topic.