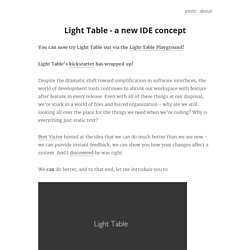 Light Table's kickstarter has wrapped up! Despite the dramatic shift toward simplification in software interfaces, the world of development tools continues to shrink our workspace with feature after feature in every release. Even with all of these things at our disposal, we're stuck in a world of files and forced organization - why are we still looking all over the place for the things we need when we're coding? Why is everything just static text? Bret Victor hinted at the idea that we can do much better than we are now - we can provide instant feedback, we can show you how your changes affect a system. We can do better, and to that end, let me introduce you to Light Table is based on a very simple idea: we need a real work surface to code on, not just an editor and a project explorer.

Light table is based on a few guiding principles: Let's take a look at how these things manifest themselves in Light Table. Docs everywhere. Fixing These jQuery. 1.6 Released! How Computers Boot Up. The previous post described motherboards and the memory map in Intel computers to set the scene for the initial phases of boot. 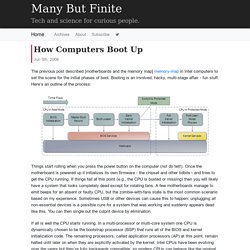 Booting is an involved, hacky, multi-stage affair – fun stuff. Here’s an outline of the process: Things start rolling when you press the power button on the computer (no! Do tell!). Once the motherboard is powered up it initializes its own firmware – the chipset and other tidbits – and tries to get the CPU running. If all is well the CPU starts running. Most registers in the CPU have well-defined values after power up, including the instruction pointer (EIP) which holds the memory address for the instruction being executed by the CPU.

The motherboard ensures that the instruction at the reset vector is a jump to the memory location mapped to the BIOS entry point. The CPU then starts executing BIOS code, which initializes some of the hardware in the machine. The BIOS now reads the first 512-byte sector (sector zero) of the hard disk. 185 Comments. All The Cheat Sheets An Up To Date Web Designer Needs: CSS3, HTML5 and jQuery. Infographs. Learn to Program, by Chris Pine. A Place to Start for the Future Programmer I guess this all began back in 2002. 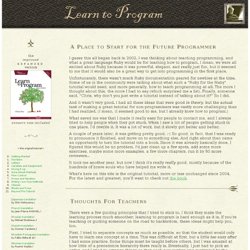 I was thinking about teaching programming, and what a great language Ruby would be for learning how to program. I mean, we were all excited about Ruby because it was powerful, elegant, and really just fun, but it seemed to me that it would also be a great way to get into programming in the first place. Unfortunately, there wasn't much Ruby documentation geared for newbies at the time. Some of us in the community were talking about what such a "Ruby for the Nuby" tutorial would need, and more generally, how to teach programming at all. And it wasn't very good. What saved me was that I made it really easy for people to contact me, and I always tried to help people when they got stuck. A couple of years later, it was getting pretty good. :-) So good, in fact, that I was ready to pronounce it finished, and move on to something else. Thoughts For Teachers About the Original Tutorial Acknowledgements. 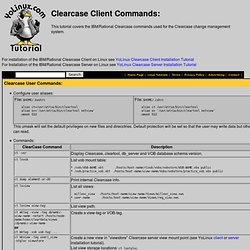 Sample $HOME/.bashrc Make changes to a file: Comments terminated with a dot (.). Use exit to get out of Clearcase view and return to Unix shell. Add new file to Clearcase control: Checkout directory (.), copy file and add it to clearcase control. Then check-in directory. View default group on Windows PC: Open a DOS command prompt window. PC Configspec: right click on XX: drive + clearcase + properties. Clearcase explorer: C:\Program Files\Rational\ClearCase\bin\clearexplorer.exe Tag "-all" refers to all files in VOB. Find all files with given label in the VOB: ct find -all -type file -version 'lbtype(LABEL-NAME)' -print Find all new or changed files since that with a specified label: ct find -all version '\! Views are required in order to use Clearcase. There are three types of views: Snapshot view: Changes and updates by others are not available to a snapshot view until a new "snapshot" is taken. Create a new Fiddle - jsFiddle - Online Editor for the Web (JavaScript, MooTools, jQuery, Prototype, YUI, Glow and Dojo, HTML, CSS)