Learn to Program, by Chris Pine 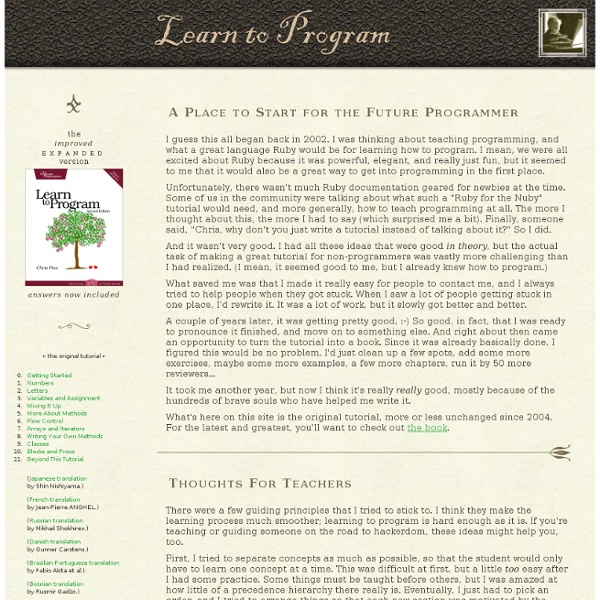 A Place to Start for the Future Programmer I guess this all began back in 2002. I was thinking about teaching programming, and what a great language Ruby would be for learning how to program. I mean, we were all excited about Ruby because it was powerful, elegant, and really just fun, but it seemed to me that it would also be a great way to get into programming in the first place. Unfortunately, there wasn't much Ruby documentation geared for newbies at the time. Some of us in the community were talking about what such a "Ruby for the Nuby" tutorial would need, and more generally, how to teach programming at all. And it wasn't very good. What saved me was that I made it really easy for people to contact me, and I always tried to help people when they got stuck. A couple of years later, it was getting pretty good. :-) So good, in fact, that I was ready to pronounce it finished, and move on to something else. Thoughts For Teachers About the Original Tutorial Acknowledgements

10 Linux commands you’ve never used It takes years maybe decades to master the commands available to you at the Linux shell prompt. Here are 10 that you will have never heard of or used. Clearcase Commands: Get shell config file sample from node-name:/home/vobadm/config/.bashrc, .cshrc, .kshrc. Sample $HOME/.bashrc Make changes to a file: Comments terminated with a dot (.). Use exit to get out of Clearcase view and return to Unix shell. Add new file to Clearcase control: Checkout directory (.), copy file and add it to clearcase control. Then check-in directory. The Tkinter Entry Widget The Entry widget is a standard Tkinter widget used to enter or display a single line of text. When to use the Entry Widget The entry widget is used to enter text strings.

why’s (poignant) guide to ruby Read This Paragraph At my local Barnes and Noble, there is a huge wall of Java books just waiting to tip over and crush me one day. And one day it will. At the rate things are going, one day that bookcase will be tall enough to crush us all. It might even loop the world several times, crushing previous editions of the same Java books over and over again. Ruby: How to bring back the joy of programming Ruby is a nice scripting language similar to Perl but cleaner and fully object-orientated. Find here a pointer to the main site about Ruby. Ruby Central also has a lots of data about Ruby. You can find here a link to an online copy of the book « Programming Ruby », by Andrew Hunt & Dave Thomas. Current development version is 1.9.2-p180.

How Computers Boot Up The previous post described motherboards and the memory map in Intel computers to set the scene for the initial phases of boot. Booting is an involved, hacky, multi-stage affair – fun stuff. Here’s an outline of the process: Things start rolling when you press the power button on the computer (no! do tell!). Installation on Windows — Kivy v1.0.8-dev documentation For Windows, we provide what we call a ‘portable package’. This is the easiest way to get Kivy running as you don’t have to install anything “system” wide. You can just unzip & run it. This installation method is simple because it bundles the Python interpreter together with the Kivy environment and libraries. If you wish to install Kivy into an existing Python environment or install the development environment, please see the Other Environments section below. Installing the portable version

Learn Ruby, Ruby on Rails tutorial Ruby on Rails is the web development framework of the moment, powering GitHub, Twitter, Hulu and many more successful apps and websites. The arrival of Rails 4 is the perfect time to learn it. SitePoint’s newest ebook, ‘Jump Start Rails’, from Andy Hawthorne, will get you up to speed with Ruby on Rails in just a weekend. Andy has also prepared the ‘Build your first Rails’ app online course to take you from creating a complete Ruby on Rails 4 app with a log in system all the way to deploying it to Heroku, a leading Rails application hosting environment, in a couple of hours. Also, our all time great, 10 part tutorial from Patrick Lenz can be found here: Learn Ruby on Rails: the Ultimate Beginner’s Tutorial. If you are looking for more advanced topics such as this great Introduction to Sass in Rails, head over to RubySource for fresh tutorials and to discover new Ruby gems.

Light Table - a new IDE concept You can now try Light Table out via the Light Table Playground! Light Table's kickstarter has wrapped up! Despite the dramatic shift toward simplification in software interfaces, the world of development tools continues to shrink our workspace with feature after feature in every release. Even with all of these things at our disposal, we're stuck in a world of files and forced organization - why are we still looking all over the place for the things we need when we're coding? Why is everything just static text?

TkInter - PythonInfo Wiki Tkinter is Python's de-facto standard GUI (Graphical User Interface) package. It is a thin object-oriented layer on top of Tcl/Tk. Tkinter is not the only GuiProgramming toolkit for Python. It is however the most commonly used one. At the Forge - Getting Started with Ruby About ten years ago, back when I was working in New York, friends of mine showed me something that knocked my socks off—a program that actually ran inside of the Web browser, without any need for pressing submit. It was sleek, fun to use and seemed like a major paradigm shift. We all were excited about what this new “Java” language and its applets would mean for Web development. Although we didn't quite know where or how it would end, we talked about nothing else for some time.

GuiProgramming - PythonInfo Wiki Python has a huge number of GUI frameworks (or toolkits) available for it, from TkInter (traditionally bundled with Python, using Tk) to a number of other cross-platform solutions, as well as bindings to platform-specific (also known as "native") technologies. Cross-Browser Frameworks Cross-Platform Frameworks The major cross-platform technologies upon which Python frameworks are based include Gtk, Qt, Tk and wxWidgets, although many other technologies provide actively maintained Python bindings.