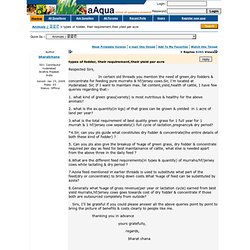 Sir, If I want to maintain max. fat content,yield,health of cattle, I have few queries regarding that:- CO-4 grass used as fodder increases milk yield considerably. In Kerala, even though 60 per cent of the milk requirement is met by procurement from other states like Tamil Nadu, Karnataka and Maharashtra, cattle rearing is fast declining due to high cost of production, labour shortage and shrinking land. 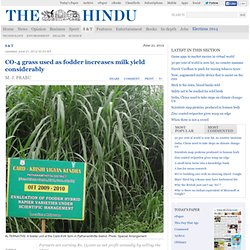 Heavy dependence on other states for raw materials pushes up the cost of concentrate feeds. “Dry straw (hay) used to feed cattle has become scarce due to decline in area under rice cultivation. It becomes a dire necessity for dairy farmers to start growing green fodder (grass) if they desire to run their unit profitably,” says Dr.S. Prabhu Kumar, Zonal Project Director, ICAR, Zonal Project Directorate, Bangalore. Grow own fodder And he adds that mere distribution of milch animals by the Government is of no use to farmers. Along with the animals they must be also made aware of the importance of growing their own fodder for the animals.

Take the case of the Koipuram Milk society established on the banks of river Pampa nearly 20 years back by one Mr. Help in English. Data warehouse. Data Warehouse Overview In computing, a data warehouse (DW, DWH), or an enterprise data warehouse (EDW), is a database used for reporting and data analysis. 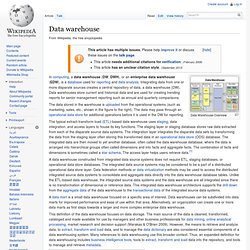 Integrating data from one or more disparate sources creates a central repository of data, a data warehouse (DW). Data Warehousing Concepts. This chapter provides an overview of the Oracle data warehousing implementation. 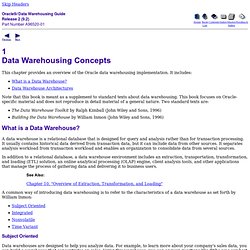 It includes: Note that this book is meant as a supplement to standard texts about data warehousing. This book focuses on Oracle-specific material and does not reproduce in detail material of a general nature. Bash - How to determine the current shell I'm working on. Education Document Pdfs. Google. Difference between OLTP and OLAP. Online Transactional Processing databases are functional orientated, they are designed to provide real-time responses from concurrent users and applications. 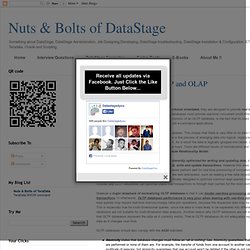 To be more specific, OLTP databases must provide real-time concurrent (multi-threaded) processing of all SQL transaction (writes/updates and reads). Another characteristic of an OLTP database, is the fact that its state (underlying data) is constantly changing. Examples of OLTP are databases that support e-commerce applications. OLTP databases are highly Normalized relational databases. Dummy Data Generation using Row Generator in DataStage - 1. How to Generate Input Data for your dummy jobs n practice ?? 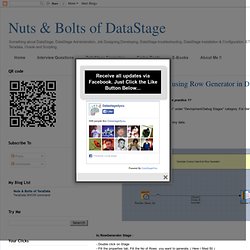 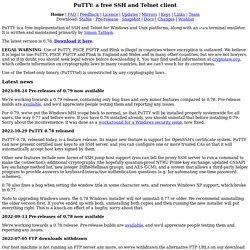 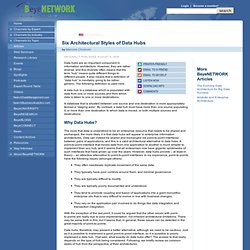 However, they are rather diverse, and this diversity often means that the term “hub” means quite different things to different people. Data warehouse. Head Stage in DataStage. Welcome to Basic Intro with Stage Series, We are going to look into HEAD stage ( Developmet/Dubug Categoty). 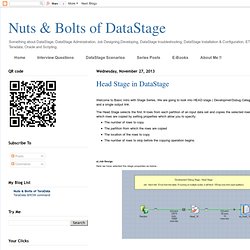 It can have a single input link and a single output link. The Head Stage selects the first N rows from each partition of an input data set and copies the selected rows to an output data set. You determine which rows are copied by setting properties which allow you to specify: The number of rows to copyThe partition from which the rows are copiedThe location of the rows to copyThe number of rows to skip before the copying operation begins. Interview Questions : DataStage - self-2. Dummy Data Generation using Row Generator in DataStage - 2. By default the Row Generator stage runs sequentially, generating data in a single partition. 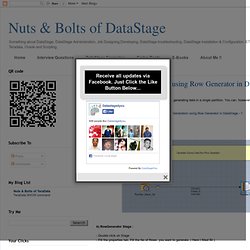 You can, however, configure it to run in parallel and meaningful data. We are using the same job design as in Dummy Data Generation using Row Generator in DataStage - 1 a) Job Design : b) RowGenerator Stage : - Double click on Stage - Fill the properties tab, Fill the No of Rows you want to generate. ( Here I filled 50 ) - Now, clock on column tab and define the column you needed on o/p file, Need to define Column Name, type, length etc. -- Now Here we took our Magic Step :-) We will edit the Meta Data of Column -- When you double click on Column 1 (Name), This Window will open, As you can see, we can edit a lot of metadata of a column here. -- We want to generate some meaningful data, so we use the Generator properties here.

I will try to explain above three points in detail below: 1) Occurrence of deadlock into metadata repository database – I have seen this scenario in the DataStage 8.1 with no fix packs installed in it. If you have fix packs (released later) installed then you may not get this problem at all. IBM Information Server throws an exception like "[IBM][SQLServer JDBC Driver][SQLServer]Transaction (Process ID 59) was deadlocked on lock resources with another process and has been chosen as the deadlock victim. View topic - What is a Sparse Lookup in DataStage EE?

Tail Stage in DataStage. Tail Stage is another one stage from development stage category. It can have a single input link and a single output link.The Tail Stage selects the last N records from each partition of an input data set and copies the selected records to an output data set. a) Job Design : b ) Tail Stage Properties : Here we have selected the stage properties as below :