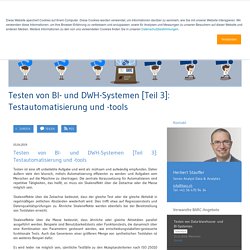 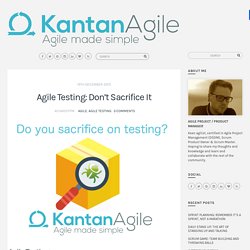 Testing is an important, especially Agile in upholding the principle ‘Never compromise on quality‘. Spec Checking and Bug Blindness. Testing is often reduced to the act of modelling specified behaviours as expected results and checking actual software behaviours against the model. 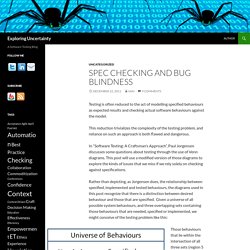 This reduction trivializes the complexity of the testing problem, and reliance on such an approach is both flawed and dangerous. In “Software Testing: A Craftsman’s Approach”, Paul Jorgensen discusses some questions about testing through the use of Venn diagrams. This post will use a modified version of those diagrams to explore the kinds of issues that we miss if we rely solely on checking against specifications.

Rather than depicting, as Jorgensen does, the relationship between specified, implemented and tested behaviours, the diagrams used in this post recognize that there is a distinction between desired behaviour and those that are specified. Those behaviours that lie within the intersection of all three sets (region 5 on the above diagram) represent those behaviours that are needed, specified and implemented. TDD Tests are not Unit Tests. The motivation for this blog entry is to explain the nature and purpose of the tests used in Test-Driven Development. 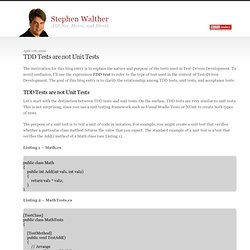 To avoid confusion, I’ll use the expression TDD test to refer to the type of test used in the context of Test-Driven Development. The goal of this blog entry is to clarify the relationship among TDD tests, unit tests, and acceptance tests. TDD Tests are not Unit Tests Let’s start with the distinction between TDD tests and unit tests. On the surface, TDD tests are very similar to unit tests. The purpose of a unit test is to test a unit of code in isolation. 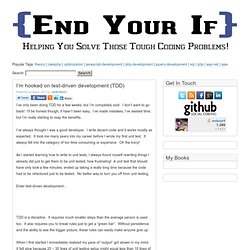 I don’t want to go back! I’ll be honest though, it hasn’t been easy. I’ve made mistakes, I’ve wasted time, but I’m really starting to reap the benefits. Adventures with testing Business Intelligence/DataWarehousing application. Abstract Gartner in its five predictions for 2009 through 2012 has written, that "business users havelost confidence in the ability of [IT] to deliver the information they need to make decisions. 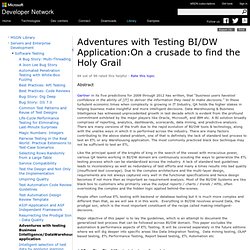 " In these turbulent economic times when complexity is growing in IT Industry, QA holds the higher stakes in helping business make insightful and more intelligent decisions. Data Warehousing & Business Intelligence has witnessed unprecedented growth in last decade which is evident from the profound commitment exhibited by the major players like Oracle, Microsoft, and IBM etc. A BI solution broadly comprises of reporting, analytics, dashboards, scorecards, data mining, and predictive analysis. There are many versions of the truth due to the rapid evolution of BI/DW tools & technology, along with the unalike ways in which it is performed across the industry. 1.

Database Testing: How to Regression Test a Relational Database. Relational database management systems (RDBMSs) often persist mission-critical data which is updated by many applications and potentially thousands if not millions of end users. 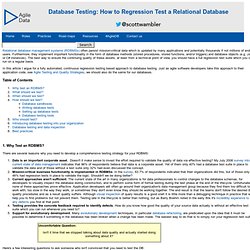 Furthermore, they implement important functionality in the form of database methods (stored procedures, stored functions, and/or triggers) and database objects (e.g. Java or C# instances). The best way to ensure the continuing quality of these assets, at least from a technical point of view, you should have a full regression test suite which you can run on a regular basis. In this article I argue for a fully automated, continuous regression testing based approach to database testing. Just as agile software developers take this approach to their application code, see Agile Testing and Quality Strategies, we should also do the same for our databases.

Table of Contents 1. Traditional Testing will be Dead Soon! Repeated software-development tasks are getting automated through the application of Continuous Delivery and DevOps . 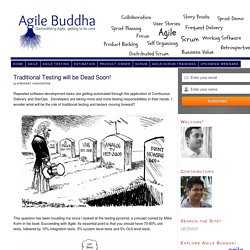 Developers are taking more and more testing responsibilities in their hands. I wonder what will be the role of traditional testing and testers moving forward? This question has been troubling me since I looked at the testing pyramid, a concept coined by Mike Kohn in his book Succeeding with Agile. Its essential point is that you should have 70-80% unit tests, followed by 10% integration tests, 5% system level tests and 5% GUI level tests. Percentage preciseness may differ.

If you look at it a bit deeper, that can be possible only when the tester has programming skills as well. Performance Testing in BI 4.1. I've recently spent a bunch of time getting to know BI 4.1, and part of that process is taking it for the proverbial test drive in terms of performance. 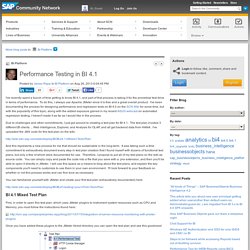 To do this, I always use Apache JMeter since it is free and a great overall product. I've been documenting the process for designing performance and regression tests on BI 4.0 on the SCN Wiki for some time, but with the popularity of this topic, along with the added exposure gained in my recent ASUG webcast on automated regression testing, I haven't made it as far as I would like in the process. Due to challenges and other commitments, I just got around to creating a test plan for BI 4.1. The test plan invokes 3 different BI clients ... Web Intelligence, Explorer, and Analysis for OLAP, and all get backend data from HANA.

And this represents a new process for me that should be sustainable in the long-term. My life as a BI consultant. Lessons Learned by a Software Tester: Agile Testing Automation. As an Agile/Testing consultant, trainer and coach there are certain questions I hear often. 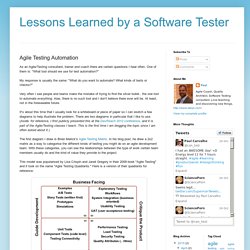 One of them is: "What tool should we use for test automation? " My response is usually the same: "What do you want to automate? What kinds of tests or checks? " Very often I see people and teams make the mistake of trying to find the silver bullet.. the one tool to automate everything.