How inkjet printers help transform stem cells. Inkjet printers and lasers are parts of a new way to produce cells important to research on nerve regeneration. 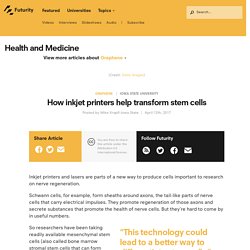 Schwann cells, for example, form sheaths around axons, the tail-like parts of nerve cells that carry electrical impulses. They promote regeneration of those axons and secrete substances that promote the health of nerve cells. But they’re hard to come by in useful numbers. “This technology could lead to a better way to differentiate stem cells.” So researchers have been taking readily available mesenchymal stem cells (also called bone marrow stromal stem cells that can form bone, cartilage, and fat cells) and using a chemical process to differentiate them into Schwann cells.

Researchers at Iowa State University have developed a nanotechnology that uses inkjet printers to print multi-layer graphene circuits and also uses lasers to treat and improve the surface structure and conductivity of those circuits. Electrodes for injuries. First Ever Quadriplegic Treated With Stem Cells Regains Motor Control in His Upper Body.

For the first time ever, neuroscientists have treated a total quadriplegic with stem cells, and he has substantially recovered the functions of his upper body only two months into the process. 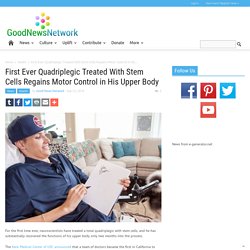 The Keck Medical Center of USC announced that a team of doctors became the first in California to inject an experimental treatment made from stem cells, AST-OPC1, into the damaged cervical spine of a recently paralyzed 21-year-old man as part of a multi-center clinical trial. On March 6, just shy of his 21st birthday, Kristopher (Kris) Boesen of Bakersfield suffered a traumatic injury to his cervical spine when his car fishtailed on a wet road, hit a tree, and slammed into a telephone pole. MORE: These New Alternatives For the EpiPen Will Cost Less Than $100 Parents Rodney and Annette Boesen were warned there was a good chance their son would be permanently paralyzed from the neck down.

Biotech Company Granted Ethical Permission To Attempt To Use Stem Cells To Reactivate The Brains Of The Dead. A biotech company in the U.S. has been granted ethical permission by an Institutional Review Board in the U.S. and India to use 20 brain-dead patients for what is sure to be a highly controversial study: From next year, they plan to stimulate their nervous systems in order to restart the brains. 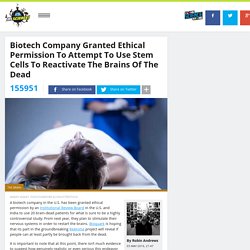 Bioquark is hoping that its part in the groundbreaking ReAnima project will reveal if people can at least partly be brought back from the dead. It is important to note that at this point, there isn’t much evidence to suggest how genuinely realistic or even serious this endeavor is; however, the panel of experts working on the initiative does include Dr. Calixto Machado, a well-known neurological researcher and a member of the American Academy of Neurology who has written extensively on brain death. Jocelyne Bloch: The brain may be able to repair itself. Could your brain repair itself? - Ralitsa Petrova. Scientists Regenerate Nerve Fibers After Spinal Cord Injury. Scientists have been able to show that by treating spinal cord injuries in rats with a specific protein already found in the body, they can encourage sensory neurons to regrow and function over large distances. 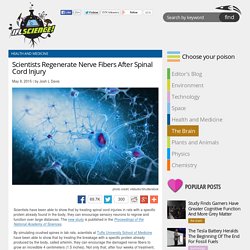 The new study is published in the Proceedings of the National Academy of Sciences. By simulating crushed spines in lab rats, scientists at Tufts University School of Medicine have been able to show that by treating the breakage with a specific protein already produced by the body, called artemin, they can encourage the damaged nerve fibers to grow an incredible 4 centimeters (1.5 inches). Not only that, after four weeks of treatment, the regenerated neurons were fully capable of passing signals along the whole length. Functional 3D Brain Tissue Successfully Grown From Stem Cells. The ultimate goal of stem cell research is to create functional replica tissues and organs for use as replacements in times of injury or disease, or for use in the development of drugs and other therapeutic techniques. 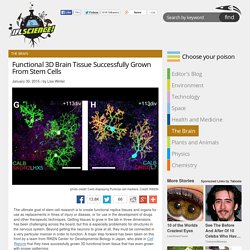 Getting tissues to grow in the lab in three dimensions has been challenging across the board, but this is especially problematic for structures in the nervous system. Beyond getting the neurons to grow at all, they must be connected in a very particular manner in order to function. A major step forward has been taken on this front by a team from RIKEN Center for Developmental Biology in Japan, who state in Cell Reports that they have successfully grown 3D functional brain tissue that has even grown with proper patterning. The brain tissues were grown from human embryonic stem cells, and growth factors were added in series throughout development. Stem Cell Transplant Improves Physical and Cognitive Symptoms In 50% Of MS Patients.

Multiple sclerosis, or MS, is an autoimmune disorder that affects the brain and spinal cord. 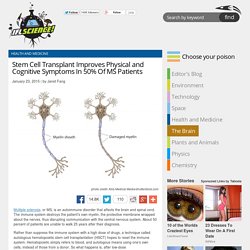 The immune system destroys the patient's own myelin, the protective membrane wrapped about the nerves, thus disrupting communication with the central nervous system. About 50 percent of patients are unable to walk 25 years after their diagnosis. Grégoire Courtine: The paralyzed rat that walked. Trial Of Stem Cell Transplants Yields Positive Results For Patients With MS. A small trial in the US which set out to investigate the safety and efficacy of stem cell therapy for patients with multiple sclerosis (MS) has yielded promising results three years into the study. 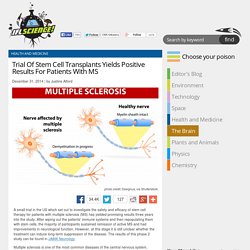 After wiping out the patients’ immune systems and then repopulating them with stem cells, the majority of participants sustained remission of active MS and had improvements in neurological function. However, at this stage it is still unclear whether the treatment can induce long-term suppression of the disease. The results of this phase 2 study can be found in JAMA Neurology. Multiple sclerosis is one of the most common diseases of the central nervous system, affecting some 2.3 million people worldwide.

New Drug Boosts Nerve Regrowth in Rats With Spinal Cord Injuries. Rats with spinal cord injuries have regained movement in their hindlimbs, as well as control of their bladder, with a newly developed drug that encourages nerve growth non-invasively. 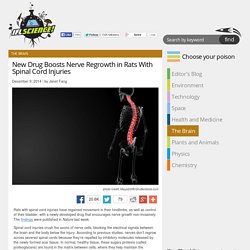 The findings were published in Nature last week. Spinal cord injuries crush the axons of nerve cells, blocking the electrical signals between the brain and the body below the injury. According to previous studies, nerves don’t regrow across severed spinal cords because they’re repelled by inhibitory molecules released by the newly formed scar tissue. In normal, healthy tissue, these sugary proteins (called proteoglycans) are found in the matrix between cells, where they help maintain the structure of the nervous system. But after an injury, proteoglycans collect in scar tissue, and when they interact with a particular axon enzyme that’s found in axons (called PTP sigma), they form an impenetrable barrier (pictured below).

Read this next: Two-Faced Cat Dies Aged 15. Scientists Edge Closer To Stem Cell Therapy For Parkinson's. Man With Severed Spinal Cord Walks Again After Cell Transplant. A man paralyzed for two years is now walking again, albeit with a frame, after a transplant to his spine. 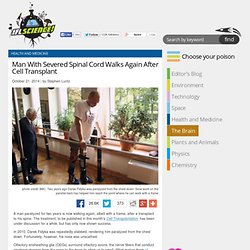 The treatment, to be published in this month's Cell Transplantation, has been under discussion for a while, but has only now shown success. In 2010, Darek Fidyka was repeatedly stabbed, rendering him paralyzed from the chest down. Fortunately, however, his nose was unscathed. Olfactory ensheathing glia (OEGs) surround olfactory axons, the nerve fibers that conduct electrical charges from the nose to the brain to allow us to smell. Scientists Identify Gene Required for Nerve Regeneration. Paralysés : des progrès à petits pas. News Highlights:Neurons Signal Stem Cells to Make New Neurons. Although neuroscientists have long suspected that the brain has some capacity to generate new neurons, they have struggled to uncover details of the brain’s capacity for repair and, possibly, self-improvement. 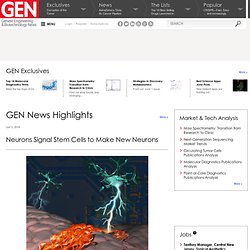 With a single gene, scientists reprogram supporting cells in the spines of living mice into new neurons. A new neuron reprogrammed from spinal cord astrocytes. ZHIDA SUThe spinal cord cannot make new neurons during adulthood, so if its supply is destroyed by disease or injury, the loss is permanent. Lifelong Neuronal Rebirth. Neuronal regeneration in the human adult brain is more widespread than previously thought. WIKIMEDIA, LIFE SCIENCE DATABASECertain neurons in the human striatum—a brain region involved in movement and cognition—are renewed throughout life, according to a study published today (February 20) in Cell. At one time, researchers thought that human neurons regenerated in fewer brain regions than in rodents and nonhuman primates. Young Blood Recharges Brains of Old Mice. Exposing older mice to young mouse blood has reversed some effects of aging on the brain, restoring some mental capabilities.

A new study suggests that factors circulating in young mouse blood could reverse impairments in age-related learning, memory, and neuron function. Previous studies have shown that blood-borne factors in old mice can impair cognitive function in young mice. A team led by Saul Villeda from University of California, San Francisco, and Tony Wyss-Coray of Stanford wanted to see if there are systemic factors in young blood that can reverse these age-related impairments.

They infused plasma -- the part of blood without cells -- from 3-month-old mice into 18-month-old mice, the equivalent of mid to late middle age. Repeated injections improved their performance in learning and memory tasks. “This could have been done 20 years ago,” Wyss-Coray says in a news release. The hippocampus is altered by experience, and it’s also extremely vulnerable to the normal aging process. Aging of Brain and Muscles Reversed Through Protein Therapy. As we age, our muscles and brain don’t retain their qualities that they did during youth. However, a recent study has shown that protein therapy can help restore muscles and brains to their former glory through therapy with the protein growth differentiation factor 11 (GDF 11). The study was led by Amy Wagers and Lee Rubin from Harvard’s Department of Stem Cell and Regenerative Biology (HSCRB) and Harvard Stem Cell Institute (HSCI) and the results were published in two papers that have both been published in Science.

Stem Cell Therapy Allows Mice With MS-Like Condition To Walk Again. The scientists also predicted that the mice would reject the stem cells, and sure enough after 8 days they couldn’t detect any of the transplanted stem cells. How Neurons Regenerate Without Affecting Memory. Our nervous system is continuously rebuilding itself. While nerve cells live for years, the proteins and molecules that make them up have to be replaced all the time.