Giant Fans Will Soon Suck CO2 out of the Atmosphere and Turn It into Fuel. By Teodora Zareva While some may associate CO2 pollution mainly with industrial plants and giant chimneys releasing the gas into the atmosphere, the reality is that emissions from the transport sector represent about 24 percent of global CO2 emissions and have the highest emissions growth of all. 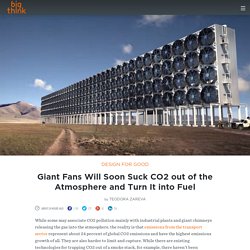 They are also harder to limit and capture. While there are existing technologies for trapping CO2 out of a smoke stack, for example, there haven’t been solutions for capturing the amount already released into the atmosphere (by cars, trucks, and planes) — CO2 that is 300 times less concentrated than the type coming out of a smoke stack. That is until now. Carbon Engineering - Industrial-scale capture of CO2 from ambient air. Scientists successfully generate gasoline out of thin air. Gasoline is the quintessential non-renewable fuel, but British scientists could soon change that. They have developed a way to make gasoline not only renewable, but also carbon neutral.

How is that possible? Fuel from the Air: Sossina Haile at TEDxBermuda. Creating Roads From Sand and Bacteria Instead of Oil. Improving America’s infrastructure has been a major priority for the Obama Administration, with a lot of money going into repairing the country’s roads and bridges. 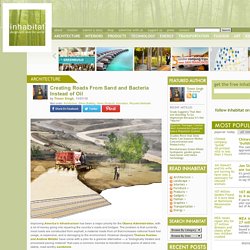 The problem is that currently most roads are constructed from asphalt, a material made from oil that increases national fossil fuel usage, is expensive, and is damaging to the environment. However designers Thomas Kosbau and Andrew Wetzler have come with a plan for a greener alternative — a “biologically treated and processed paving material” that uses a common microbe to transform loose grains of stand into stable, road-worthy sandstone. The plan, called ‘Sand.Stone.Road‘ recently won the grand prize in the Korean green design ‘Iida Awards 2010‘, which were organized by Designboom in collaboration with Incheon Metropolitan City. Nova usina captura gás carbônico e o transforma em combustível.