THUG The Hate U Give

Racial Equity Resource Guide. Internalized racism is the situation that occurs in a racist system when a racial group oppressed by racism supports the supremacy and dominance of the dominating group by maintaining or participating in the set of attitudes, behaviors, social structures and ideologies that undergird the dominating group's power. 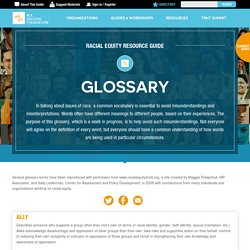 It involves four essential and interconnected elements: Decision-making — Due to racism, people of color do not have the ultimate decision-making power over the decisions that control our lives and resources. As a result, on a personal level, we may think white people know more about what needs to be done for us than we do.

On an interpersonal level, we may not support each other's authority and power — especially if it is in opposition to the dominating racial group. Structurally, there is a system in place that rewards people of color who support white supremacy and power and coerces or punishes those who do not. Black Lives Matter Grows as Movement While Facing New Challenges. KENOSHA, Wis. — In some ways, what has unfolded on the streets of Kenosha, Wis., over the past week has had a wearying sense of familiarity. 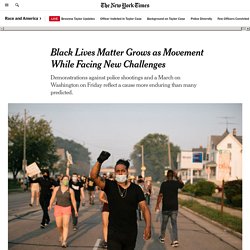 There was another demoralizing shooting of a Black man by the police, another angry outcry in the streets, another disturbing trail of destruction that had the potential to overshadow the message of the need to end police violence and racism. But as the demonstrations for Jacob Blake, the man shot in Kenosha, spread nationwide this week, and as civil rights leaders prepare to host tens of thousands of people in a March on Washington on Friday, this latest surge of protests reflects something much more — the remarkable way that the Black Lives Matter movement has come to represent a lever for change and a guiding voice on issues of race in America.

Black Lives Matter protests — or even the possibility of them — have changed the way that people in power respond. Elected leaders, including Gov. And there is broader public witness and involvement. Stay Woke: The Black Lives Matter Movement documentary (2016) The Power of Language Theme in The Hate U Give. From the lyrics of hip-hop to the teachings of the Black Panthers, language in The Hate U Give is a tool for education, justice, and speaking truth to power. 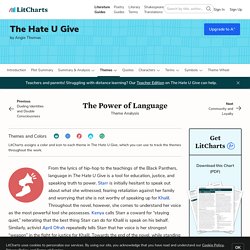 Starr is initially hesitant to speak out about what she witnessed, fearing retaliation against her family and worrying that she is not worthy of speaking up for Khalil. Throughout the novel, however, she comes to understand her voice as the most powerful tool she possesses. Kenya calls Starr a coward for “staying quiet,” reiterating that the best thing Starr can do for Khalil is speak on his behalf. Similarly, activist April Ofrah repeatedly tells Starr that her voice is her strongest “weapon” in the fight for justice for Khalil. Towards the end of the novel, while standing atop a police car during the riots, Starr observes that her “bullhorn is as heavy as a gun. Thomas further suggests that if language is a form of power, then silence is a means of control. [Listen][Download] The Hate U Give Audiobook - By Angie Thomas. The Hate U Give Audiobook is the type of young adult novel, written by Angie Thomas and was published on February 28, 2017. 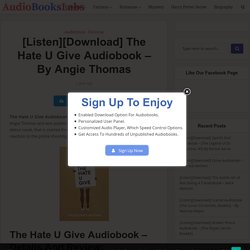 This book is Thomas’s debut novel, that is started from just a short story she wrote in college in reaction to the police shooting of Oscar Grant. The Hate U Give Audiobook – Details And Review: The Hate U Give is Thomas’s first novel about a teenage girl who faces racism, police brutality and injustice after the death of her childhood friend Khalil. 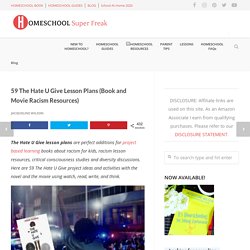 Here are 59 The Hate U Give project ideas and activities with the novel and the movie using watch, read, write, and think. Often, the most important learning takes place when we are pushed out of our comfort zones and tackle the tough topics … like in teaching The Hate U Give. Sometimes learning isn’t about fun crafts and awesome theme lessons and resources and light, funny reads. Nope. Affiliate links are used on this site. Sometimes you have to go deeper into developing critical consciousness and a better understanding of bigger issues with our learning. One way to do this and cover racism for kids is with project based learning like with The Hate U Give lesson plan.