Black history in the USA 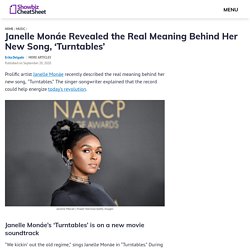 Chapter 4 : Black American History. B-roll. Chapter 4 : Black American History. Claudette Colvin: Twice Toward Justice. Ruby Bridges visits with the President and her portrait. Born black in the US. Standing up for freedom. Black history month. Segregation Interactive worksheet. THE ROAD TO CIVIL RIGHTS - Teacher Letang. On 1 December 1955, the actions of one woman started a movement that changed life for all African Americans. 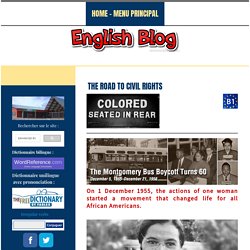 On that day, Rosa Parks refused to leave her seat on a bus in Montgomery, Alabama, so a white man could sit down. At that time, most black Americans didn’t have equal rights with Whites. In the Southern states, like Alabama, it was extremely difficult for black people to vote. BRNE Anglais 3e : Black American History - Délégation académique au numérique - académie de Nancy-Metz. Modalité (déroulement de l’activité proposée aux élèves) : 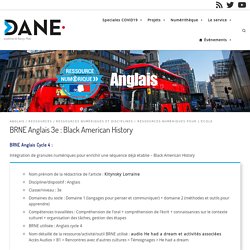 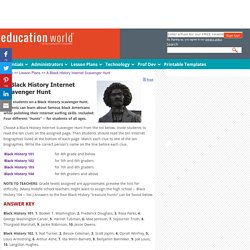 Students can learn about famous black Americans while polishing their Internet surfing skills. Included: Four different "hunts" -- for students of all ages. Choose a Black History Internet Scavenger Hunt from the list below. Invite students to read the ten clues on the assigned page. Then students should read the ten Internet biographies listed at the bottom of each page. How Rosa Parks Fought for Civil Rights. Interview with Rosa Parks Below are Rosa Parks's answers to questions from students. 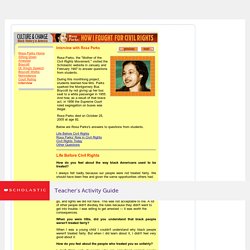 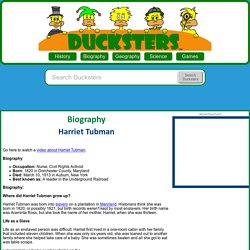 Biography: Where did Harriet Tubman grow up? Harriet Tubman was born a slave on a plantation in Maryland. Historians think she was born in 1820, or possibly 1821, but birth records weren't kept by most slave owners. Her birth name was Araminta Ross, but she took the name of her mother, Harriet, when she was thirteen. Kids History: Underground Railroad. History >> Civil War The Underground Railroad was a term used for a network of people, homes, and hideouts that slaves in the southern United States used to escape to freedom in the Northern United States and Canada. 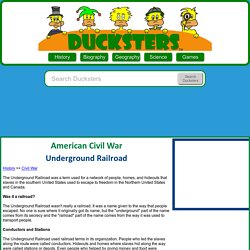 Was it a railroad? The Underground Railroad wasn't really a railroad. It was a name given to the way that people escaped. Black History : Lesson plans - Webquests. YouTube. Segregation In America: 33 Powerful Historical Photos. Like this gallery? Share it: 1 of 34. Jim Crow laws. The Jim Crow laws were a number of laws requiring racial segregation in the United States. 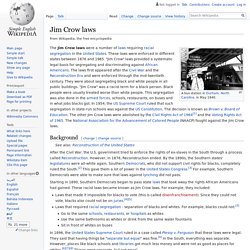 These laws were enforced in different states between 1876 and 1965. "Jim Crow" laws provided a systematic legal basis for segregating and discriminating against African Americans. The laws first appeared after the Civil War and the Reconstruction Era and were enforced through the mid-twentieth century. The fight for equality : from the Civil War to Obama. Afro - American people 's History : main facts'chronology. From slavery to civil Rights - after the Civil war.

Ferguson (1896), is a landmark United States Supreme Court decision in the jurisprudence of the United States, upholding the constitutionality of state laws requiring racial segregation in public facilities under the doctrine of "separate but equal".[1] The decision was handed down by a vote of 7 to 1 with the majority opinion written by Justice Henry Billings Brown and the dissent written by Justice John Marshall Harlan. "Separate but equal" remained standard doctrine in U.S. law until its repudiation in the 1954 Supreme Court decision Brown v. Board of Education.[2] After the Supreme Court ruling, the New Orleans Comité des Citoyens (Committee of Citizens), which had brought the suit and had arranged for Homer Plessy's arrest, in an act of civil disobedience in order to challenge Louisiana's segregation law, replied, "We, as freemen, still believe that we were right and our cause is sacred Background[edit] In his case, Homer Adolph Plessy v. 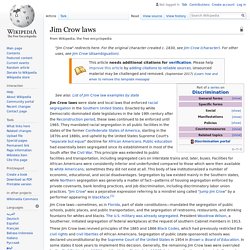 The U.S. military was already segregated. President Woodrow Wilson, a Southerner, initiated segregation of federal workplaces at the request of southern Cabinet members in 1913. Etymology. Black Code and Jim Crow Law examples - Black Codes and Jim Crow. Some common elements of Black Codes were: Race was defined by blood; the presence of any amount of black blood made one black.Employment was required of all freedmen; violators faced vagrancy charges.Freedmen could not assemble without the presence of a white person.Freedmen were assumed to be agricultural workers and their duties and hours were tightly regulated.Freedmen were not to be taught to read or write.Public facilities were segregated.Violators of these laws were subject to being whipped or branded.

Black Codes (United States) Since the colonial period, colonies and states had passed laws that discriminated against free Blacks. In the South, these were generally included in "slave codes"; the goal was to reduce influence of free blacks (particularly after slave rebellions) because of their potential influence on slaves.

Restrictions included prohibiting them from voting (although North Carolina allowed this before 1831), bearing arms, gathering in groups for worship and learning to read and write. A major purpose of these laws was to preserve slavery among other things. In the first two years after the Civil War, white-dominated southern legislatures passed Black Codes modeled after the earlier slave codes. They were particularly concerned with controlling movement and labor, as slavery had given way to a free labor system. Two Snakes Slavery wus a bad thing en' freedom, of de kin' we got wid nothin' to live on wus bad. Convicts leased to harvest timber circa 1915, in Florida Belz, Herman.

Ku Klux Klan. American white supremacy group The first Klan flourished in the Southern United States in the late 1860s during Reconstruction, then died out by the early 1870s. It sought to overthrow the Republican state governments in the South, especially by using voter intimidation and targeted violence against African-American leaders. Each chapter was autonomous and highly secret as to membership and plans. Its numerous chapters across the South were suppressed around 1871, through federal law enforcement. Members made their own, often colorful, costumes: robes, masks and conical hats, designed to be terrifying and to hide their identities.[16][17] IMPORTANT EVENTS IN BLACK HISTORY.

Facts : Harriet Tubman. Harriet Tubman’s actual birthday is unknown. It is believed that she was born between 1819 and 1823.Her birth name was Araminta Ross. She was nicknamed “Minty” by her mother.Tubman’s maternal grandmother, Modesty, arrived on a slave ship from Africa. I Be So Glad...When the Sun Goes Down. Ruby Bridges Unit. Emmett Till. Emmett Till, a 14-year old African-American boy, was murdered in August 1955 in a racist attack that shocked the nation and provided a catalyst for the emerging civil rights movement. A Chicago native, Till was visiting relatives in Money, Mississippi, when he was accused of harassing a local white woman. Several days later, relatives of the woman abducted Till, brutally beating and killing him before disposing of his body in a nearby river.