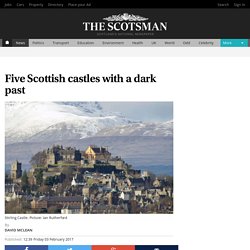 More interesting, however, are the dark tales which are recorded as historical fact. Dunottar Castle It’s regarded as one of Scotland’s most spectacular historic sites, but Dunottar Castle in Aberdeenshire has endured a torrid past. It was recaptured in 1297 following a lengthy siege orchestrated by none other than William Wallace. No mercy was shown. The poet Bind Harry wrote about the chilling incident in his 15th century epic ‘Wallace’: Therefore a fire was brought speedily Which burnt the church, and all those South’ron boys Out o’er the rock the rest rush’d great noise Some hung on craigs, and loath were to die Some lap, some fell, some flutter’d in the sea And perish’d all, not one remain’d alive. Stirling Castle Few places in Scotland have experienced a more bloody history than Stirling Castle.

Aided by his courtiers, James II murdered William in the most brutal fashion imaginable. Dunaverty Castle. Accommodation at Comrie Croft. We love wild camping in Scotland, so when we set up our campsite this was our idea: beautiful, accessible wild camping with decent facilities and hot showers. 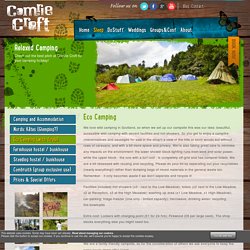 So you get to enjoy a campfire (marshmallows and sausages for sale in the shop!) A view of the hills or birch woods but without rows of caravans, and with a bit more space and privacy. We're also taking great care to minimise any impacts on the environment: the lower shower block lighting runs from wind and solar power, while the upper block - the one with a turf roof - is completely off-grid and has compost toilets.

We are a bit obsessed with reusing and recycling. Please do your bit by seperating out your recyclables (nearly everything!) Extra cost: Lockers with charging point (£1 for 24 hrs); Firewood (£6 per large sack). Remember to ask for your 10% sustainable travel discount if you get here by bus, bike or on foot! Self Catering - England's Star-Rated Holiday Homes. Our pick: 10 walks to tidal islands. Scotland’s Islands. 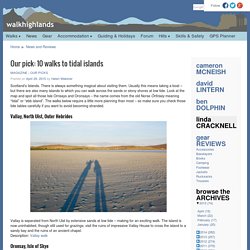 There is always something magical about visiting them. Usually this means taking a boat – but there are also many islands to which you can walk across the sands or stony shores at low tide. Look at the map and spot all those Isle Ornsays and Oronsays – the name comes from the old Norse Örfirisey meaning “tidal” or “ebb island”. The walks below require a little more planning than most – so make sure you check those tide tables carefully if you want to avoid becoming stranded.

Vallay, North Uist, Outer Hebrides Vallay is separated from North Uist by extensive sands at low tide – making for an exciting walk. Oronsay, Isle of Skye There are at least 20 Oronsays or Ornsays in the Hebrides, including two on Skye; this one in Loch Bracadale is a real gem. Davaar, Kintyre peninsula Davaar guards the entrance to Campbeltown loch and harbour, near the foot of the Kintyre peninsula. Undiscovered Scotland: Home Page. Earth - The place where you can walk through the Universe. Last summer, I saw the multiverse open up. 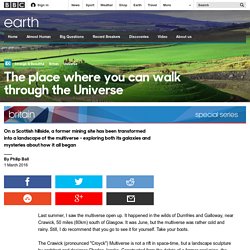 It happened in the wilds of Dumfries and Galloway, near Crawick, 50 miles (80km) south of Glasgow. It was June, but the multiverse was rather cold and rainy. Red Squirrel Campsite,"wild" camping site with campfires. Glencoe, Scotland near Fort William, Ben Nevis. The National Trust for Scotland. Enter the name of a Trust place, place name, city or region Map Data Map data ©2015 Google Map West AffricMountain CountrysideRoss-shire, Highlands, IV40 8HQ Georgian HouseHistoric House/PalaceEdinburgh, Edinburgh & lothian, EH2 4DR Menstrie CastleCastle and GroundsMenstrie, Argyll, stirling & the trossachs, FK11 7AY Garden Walk - Winter PruningDates:Dates between : Sat 10 Jan - Sat 10 OctLocation:Greenbank GardenDetailsView all events at this locationJoin the team for the regular garden walk to see what is doing well in the garden now and get advice on what you should be doing in your own garden. 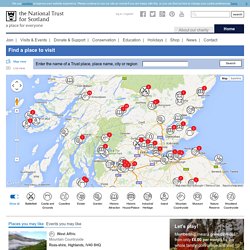 Nature NippersDates:Dates between : Fri 3 Jul - Fri 4 DecLocation:Glencoe & DalnessDetailsView all events at this locationNature Nippers is a pre-school nature group for under 5’s and their parents. Membership means great days out from only £6.00 per month for the whole family. Scotland self-catering cottages. Scotland. Travel: A tour of Scotland’s mythical sites and legends.

IF you’re looking for a taste of Scotland’s ancient lore, then a visit to these sites is a must, writes Matthew Dunne-Miles Drumelzier Drumelzier, a small village in the Borders, plays an important role in the story of Merlin, King Arthur’s right-hand man. 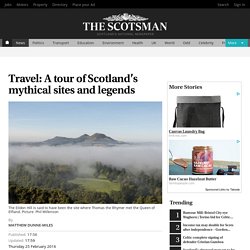 According to legend, the wizard was trapped inside a tree by the enchantress Morgan le Fay there. Drumelzier is also the site where the wizard was said to have been converted to Christianity as well as the site of his ‘three deaths’, where he was chased off a cliff, fell onto his own fishing rod and died with his head in the sea. Falls of Dochart ~ Killin.