The Plot. The Plot The Plot Question time! 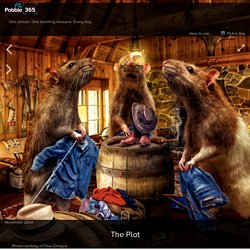 What is it that you think they wanted? What do you think is in the barrels? Which mouse is in charge? If the mice could talk, what would they be saying? Perfect picture! Can you draw a picture of one of the mice doing something extraordinary? Story starter! They had been in the barn for ages. Outfits ready, equipment set, plan made, they were almost ready to leave. They knew what they wanted, and were determined to get it. Sentence challenge! Can you write a sentence that uses an apostrophe for omission? E.g. cannot = can’t I have = I’ve he will= he’ll she is= she’s we have= we’ve will not = won’t He can not see anything. I have never been so excited! Texttyper i engelska. Myths and Legends - Myths and Legends from E2BN. Slowing down time (in writing & film) - Aaron Sitze. Slow motion (commonly abbreviated as slowmo) is an effect in film-making whereby time appears to be slowed down. 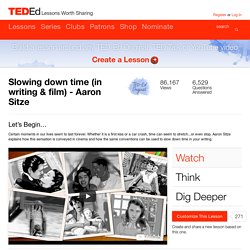 It was invented by the Austrian priest August Musger.Professor August Musger (February 10, 1868 - October 30, 1929) was an Austrian priest and physicist who is best remembered for his invention of slow motion.The Sound of Music (1959) is a musical with music by Richard Rodgers, lyrics by Oscar Hammerstein II and a book by Howard Lindsay and Russel Crouse. It is based on the memoir of Maria von Trapp, The Story of the Trapp Family Singers. SlowMotion Films: We are a production company with a taste for the extreme specializing in super slow motion cinematography. Armed with a Phantom High Speed Camera and a myriad of toys to move it around with, we are always searching for that next challenge, embracing extreme environments and locales. These videos are our test shoots as we play with the functionality of the camera in a variety of atmospheres and light conditions.

Skriva med flyt. Anna's wet day out. Find a picture of the hero of your story in a magazine or on the internet, big enough for your teaching situation. 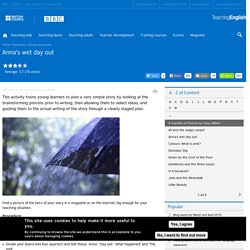 Procedure Stage 1: Brainstorming Write the title 'Anna's wet day out' at the top of the board. Check students understand the meaning.Divide your board into four quarters and title these: 'Anna', 'Day out', 'What happened' and 'The end'.Show students the picture and ask the following questions: How old is she? Where is she from? Stage 2: Think about your audienceEstablish that the aim of a story is to entertain. Stage 3: Selection of ideas - story planAsk students to copy the grid from the board and then in each part to choose and copy just the information they want to include in their story. Stage 4: Story feedbackAsk students to tell their stories in small groups. Take students' plans in and mark them to show you consider the plan itself to be important and to give them any advice you think is needed.

0-100: What Are You Proud Of? Writing well in English. Five Steps to Writing a Good For and Against Essay. An essay is a formal piece of writing which describes, analyses or discusses a particular issue. 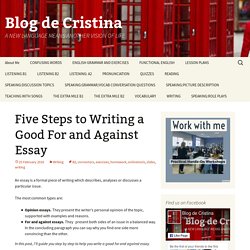 The most common types are: Opinion essays. They present the writer’s personal opinion of the topic, supported with examples and reasons.For and against essays. They present both sides of an issue in a balanced way. In the concluding paragraph you can say why you find one side more convincing than the other. In this post, I’ll guide you step by step to help you write a good for and against essay. Step 1. Step 1. Download pdf 1. 2. Once you have your first draft pay attention to how you have organised the information into paragraphs and grouped ideas. Once this is done you can focus on expression. 3. Introduction- Paragraph 1- Introduce the topic. How to Write Better Short Stories. Short stories last for just a few pages. 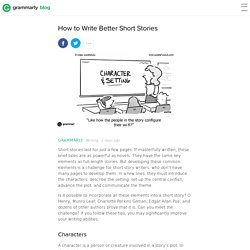 If masterfully written, these brief tales are as powerful as novels. They have the same key elements as full-length stories. But developing these common elements is a challenge for short story writers, who don’t have many pages to develop them. In a few lines, they must introduce the characters, describe the setting, set up the central conflict, advance the plot, and communicate the theme. Is it possible to incorporate all these elements into a short story? Characters A character is a person or creature involved in a story’s plot. Here’s a tip: Choose one main character from your story.

Central characters should have depth. Here’s a tip: Give your character a trait that will illustrate her personality. Setting Settings anchor the characters in time and place, often determining their clothing, customs, dialogue, and beliefs. Here’s a tip: Consider multiple senses when developing your setting. Personal Narrative.