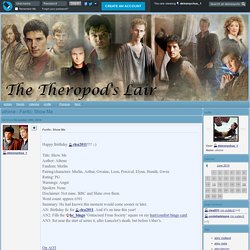 Beltane by astolat: merlin_flashfic. Beltane (1171 words, no episode spoilers beyond pilot, PG) There is a story that is not told in Ealdor anymore, not for many years now, a story about Beltane Eve. 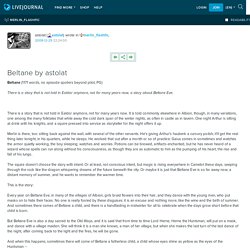 There is a story that is not told in Ealdor anymore, not for many years now. It is told commonly elsewhere in Albion, though, in many variations, one among the many folktales that while away the cold dark span of the winter nights, as often in castle as in tavern. One night Arthur is sitting at drink with his knights, and a squire pressed into service as storyteller for the night offers it up. Merlin is there, too: sitting back against the wall, with several of the other servants. Fanfic: Blind Devotion, Merlin. "Good Morning Sire! 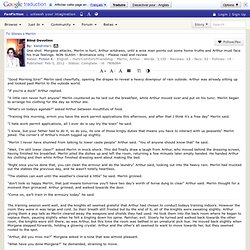 " Merlin said cheerfully, opening the drapes to reveal a heavy downpour of rain outside. Arthur was already sitting up and looked past Merlin to the outside world. Cripple, Merlin. A/N: This oneshot is kind of all over the place. 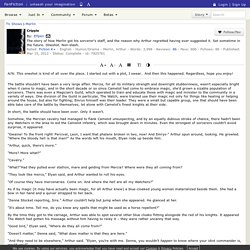 I started out with a plot, I swear… And then this happened. Regardless, hope you enjoy! The battle shouldn't have been a very large affair. Mercia, for all its military strength and downright stubbornness, wasn't especially bright when it came to magic, and in the short decade or so since Camelot had come to embrace magic, she'd grown a sizable population of sorcerers. There was even a Magician's Guild, which operated to train and educate those with magic and minister to the community in a variety of ways. Fanfic: Daisies in Winter, Merlin. Falling on Deaf Ears - Heavenly_Bodies - Merlin. Merlin didn’t hear Gwaine’s warning, only felt the hard thump of metal against his back. 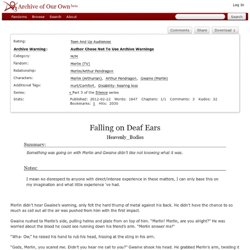 He didn’t have the chance to so much as call out all the air was pushed from him with the first impact. Fanfic: Feel the Silence, Merlin. Curvasud: frequently asked questions. Fiction. 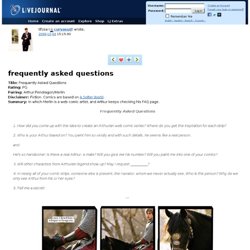 Comics are based on . In which Merlin is a web comic artist, and Arthur keeps checking his FAQ page. 1. How did you come up with the idea to create an Arthurian web comic series? Merlin - Gift - Scratching Post. Title: GiftGenre: GenRating: PGLength: 1,020Spoilers: General for Series 1Synopsis: Every gift has its price, Merlin’s is no exception.Author’s Notes: This was only going to be a drabble. 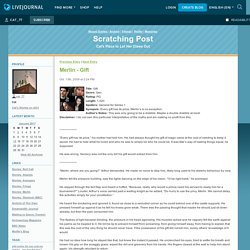 Maybe a double drabble at most. Disclaimer: I do not own this particular interpretation of the myths and am making no profit from this. “Every gift has its price,” his mother had told him. He had always thought his gift of magic came at the cost of needing to keep it secret. Fic: Harmonia Mundi (Merlin/Arthur, R): Part 1 - Sometimes I look at you, and I'm sad because you're not a dragon. Part One Silence. 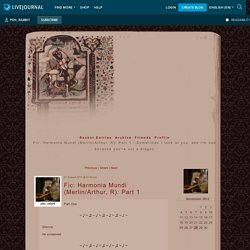 He screamed. It had taken a long time for Merlin to wrap his head around the concept of ‘quiet’. His mother, when asked, told him that he had always been a noisy child - though not in a bad way. It hadn’t been that he had screamed or cried; indeed, he had almost never been upset about anything. And, Hunith said, if she ever asked him to be quiet, he would just looked at her with wide puzzled eyes. I will follow you into the dark = Kink Me! #9: kinkme_merlin. In Darkness. Merlin sighed as he wandered down the hall, lagging slightly behind Arthur as the two of them made their way towards the courtyard, where they would soon be greeting some visitors, the royal family of Varelia, and welcoming them to Camelot. 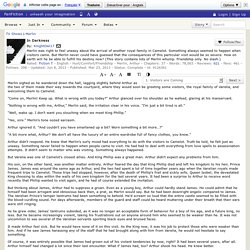 "Come on, Merlin! Keep up. What is wrong with you today? " Fanfic: What the eye cannot see Ch 7, Merlin. Your Silent Strength. Nerves were getting the better of Merlin. 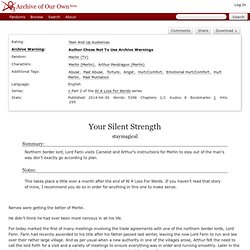 He didn’t think he had ever been more nervous in all his life. For today marked the first of many meetings involving the trade agreements with one of the northern border lords, Lord Farin. Farin had recently ascended to his title after his father passed last winter, leaving the now Lord Farin to run and law over their rather large village. And as per usual when a new authority in one of the villages arose, Arthur felt the need to call the lord forth for a visit and a variety of meetings to ensure everything was in order and running smoothly.

Later in the year, Arthur would then personally journey to the village to see it all for himself. However, this was to be Merlin’s first introduction and meeting as Arthur’s court advisor with someone outside the initial council and inner circle. It had been a shock to the kingdom years ago upon hearing that Arthur was knighting commoners and the council had not taken that news that well either. [meme] The Magical Reveal Meme!: thisissirius. Two things. overheardincmlt. LOL YOU GUYS. i don't know. + Merlin/Arthur Magical Reveal Meme + When the Walls Won't Hold - 1917farmgirl - Merlin (TV) Chapter Text Chapter 10 The bridge turned out to be much farther away than it appeared. It seemed to take Arthur and Leon ages to slog through the swampy forest and arrive in front of it, and once they were there, the prince began to seriously doubt the wisdom of using it.

Built of questionable looking sticks and boards, it was covered in so much moss and plant growth he was sure the forest was trying to reclaim the whole lot. He eyed the rickety thing warily.